The Polynesian languages are a language family spoken in the region known as Polynesia. They are classified as part of the Austronesian family, belonging to the Oceanic branch of that family. They fall into two branches: Tongic and Nuclear Polynesian. Polynesians share many cultural traits including language.

Today there are many cognate words across the different islands e.g. tapu, ali'i, motu, kava (Kava culture), and tapa as well as Hawaiki, the mythical homeland for some of the cultures.

There are approximately forty Polynesian languages. The most prominent of these are Tahitian, Samoan, Tongan, Māori and Hawaiian. Because the Polynesian islands were settled relatively recently and because internal linguistic diversification only began around 2,000 years ago, their languages retain strong commonalities. There are two broad subgroups: Tongan and Niuean constitute the Tongic division and all others are considered part of the Nuclear Polynesian division. 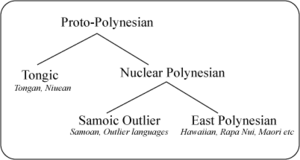 The traditional classification of the Polynesian languages

In addition, data weakly supported the Futunic languages as a group. Not included in the database were Niuafoʻouan and Pukapuka, both of uncertain classification.

Partly because Polynesian languages split from one another comparatively recently, many words in these languages remain similar to corresponding words in others. The table below demonstrates this with the words for 'sky', 'north wind', 'woman', 'house' and 'parent' in a representative selection of languages: Tongan; Niuean; Samoan; Sikaiana; Takuu; Rapanui; Tahitian; Cook Islands Māori (Rarotongan); Māori; North Marquesan; South Marquesan; Hawaiian and Mangarevan.

Similarities in basic vocabulary may allow speakers from different island groups to achieve a surprising degree of understanding of each other's speech. When a particular language shows unexpectedly large divergence in vocabulary, this may be the result of a name-avoidance taboo situation – see examples in Tahitian, where this has happened often.

Many Polynesian languages have been greatly affected by European colonization. Both Māori and Hawaiian, for example, have lost much ground to English, and have only recently[when?] made progress towards restoration.

In general, Polynesian languages have three numbers for pronouns and possessives: singular, dual and plural. For example in Māori: ia (he/she), rāua (they two), rātou (they 3 or more). The words rua (2) and toru (3) are still discernible in endings of the dual and plural pronouns, giving the impression that the plural was originally a trial, and that an original plural has disappeared.[4] Polynesian languages have four distinctions in pronouns and possessives: first exclusive, first inclusive, second and third. For example in Māori, the plural pronouns are: mātou (we, exc), tātou (we, inc), koutou (you), rātou (they). The difference between exclusive and inclusive is the treatment of the person addressed. Mātou refers to the speaker and others but not the person or persons spoken to (i.e., "I and some others, but not you"), while tātou refers to the speaker, the person or persons spoken to, and everyone else (i.e., "You and I and others").

a and o possession

Many Polynesian languages distinguish two possessives. The a-possessives (as they contain that letter in most cases), also known as subjective possessives, refer to possessions which must be acquired by one's own action (alienable possession). The o-possessives or objective possessives refer to possessions which are fixed to you, unchangeable, and do not necessitate any action on your part (but upon which actions can still be performed by others) (inalienable possession). Some words can take either form, often with a difference in meaning. One example is the Samoan word susu which takes the o-possessive in lona susu (her breast) and the a-possessive in lana susu (her breastmilk). Compare also the particles used in the names of two of the books of the Māori Bible: Te Pukapuka a Heremaia (The Book of Jeremiah) with Te Pukapuka o Hōhua (The Book of Joshua); the former belongs to Jeremiah in the sense that he was the author, while the Book of Joshua was written by someone else about Joshua.

Most Polynesian alphabets have five vowels (a,e,i,o,u) corresponding roughly in pronunciation to classical Latin. In the tradition of orthographies of languages they were familiar with the missionaries who first developed orthographies for unwritten Polynesian languages did not explicitly mark phonemic vowel length or the glottal stop. By the time that linguists trained in more modern methods made their way to the Pacific, at least for the major languages, the Bible was already printed according to the orthographic system developed by the missionaries, and the people had learned to read and write without marking vowel length or the glottal stop. This situation persists up to now in many languages. Despite efforts of local academies at reform the general conservative resistance to orthographic change has led to varying results in the different languages and several writing systems co-exist. The most common method, however, is the one where a macron is used to indicate a long vowel, while a vowel without that accent is short. For example: ā versus a. The glottal stop (not present in all Polynesian languages, but where present it is one of the most common consonants) is indicated by an apostrophe. For example: 'a versus a. This is somewhat of an anomaly as the apostrophe is most often used to represent letters which have been omitted, while the glottal stop is rather a consonant which is not written. The problem can somewhat be alleviated by changing the simple apostrophe for a curly one, taking a normal apostrophe for the elision and the inverted comma for the glottal stop. The latter method has come into common use in Polynesian languages.