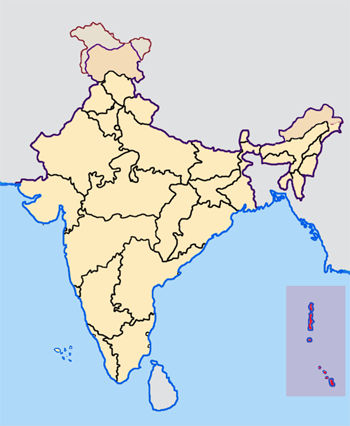 The Andaman & Nicobar Islands audio|Andaman.ogg|pronunciation is a of . Informally, the territory's name is often abbreviated to A & N Islands, or ANI. It is located in the , in the southern reaches of the , near and . It comprises two island groups - the and the - which separate the to the east from the Indian Ocean. These two groups are separated by the 10° N parallel, the Andamans lying to the north of this , and the Nicobars to the south. The capital of this territory is the Andamanese town of .

The Andaman and Nicobar islands have been inhabited for several thousand years, at the very least. The earliest archaeological evidence yet documented goes back some 2,200 years; however, the indications from genetic, cultural and linguistic isolation studies point to habitation going back 30,000 to 60,000 years, well into the .

In the Andaman Islands, the various peoples maintained their separated existence through the vast majority of this time, diversifying into distinct linguistic, cultural and territorial groups. By the 1850s when they first came into sustained contact by outside groups, the of the Andamans were:
* the , who collectively represented at least 10 distinct sub-groups and languages;
* the Jarawa;
* the (or "Rutland Jarawa");
* the ; and
* the (most isolated of all the groups).In total, these peoples numbered somewhere around 7,000 at the time of these first encounters. As the numbers of settlers from the mainland increased (at first mostly prisoners and involuntary ers, later purposely recruited farmers), these indigenous peoples lost territory and numbers in the face of land encroachment and the effects of various . The Jangil and most of the Great Andamanese groups soon became extinct; presently there remain only approximately 400-450 indigenous Andamanese, the Jarawa and Sentinelese in particular maintaining a steadfast independence and refusing most attempts at contact.

The indigenous peoples of the Nicobars (unrelated to the Andamanese) have a similarly isolated and lengthy association with the islands. There are two main groups:
* the , or "Nicobari", living throughout many of the islands; and
* the , restricted to the interior of .

The islands provided a temporary maritime base for ships of the s in the 17th century. The legendary harassed colonial shipping routes with a base in the islands.

After an initial attempt to set up a colony in the islands by the British was abandoned after only a few years (1789-1796), a second attempt from 1858 proved to be more permanent. The primary purpose was to set up a for dissenters and independence fighters from the .

The British used the islands as an isolated prison for members of the . The mode of imprisonment was called "". The in Port Blair was regarded as the "" of .

The islands were administered as a Chief Commissioner's Province.

The British continued their occupancy until the Japanese .

The islands were nominally put under the authority of the of Netaji . Netaji visited the islands during the war, and renamed them as "Shaheed" (Martyr) & "Swaraj" (Self-rule). General Loganathan, of the was made the Governor of the Andaman and Nicobar Islands. On 22 February, 1944 he along with four INA officers-Major Mansoor Ali Alvi, Sub. Lt. Md. Iqbal, Lt. Suba Singh and stenographer Srinivasan arrived at Lambaline airport of Port Blair. On 21 March,1944 the Headquarters of the Civil Administration was established near the Gurudwara at Aberdeen Bazaar. On 2 October, 1944, Col. Loganathan handed over the charge to Maj. Alvi and left Port Blair, never to return. ["Black Days in Andaman and Nicobar Islands" by Rabin Roychowdhury, Pub. Manas Pubs. New Delhi]

At the independence of both India (1947) and (1948), the departing British announced their intention to resettle all and Anglo-Burmese on the islands to form their own nation, although this never materialized. It became an Indian union territory (UT) in 1950.

On the coasts of the Andaman and Nicobar Islands were devastated by a 10 high following the . At least 5,930 people (possibly an accurate estimate) were believed to have been killed on the Nicobar and Andaman Islands during the disaster. One of the worst affected island was .

While newer settlers of the islands suffered the greatest casualties from the tsunami, most of the aboriginal people survived because oral traditions passed down from generations ago warned them to evacuate from large waves that follow large earthquakes. [http://news.bbc.co.uk/2/hi/south_asia/4181855.stm]

There are 572 in the territory, of which only some 38 are permanently inhabited. Most of the islands (about 550) are in the Andamans group, 26 of which are inhabited. The smaller Nicobars comprise some 22 main islands (10 inhabited). The Andamans and Nicobars are separated by a channel (the ) some 150 km wide.

The total area of the Andaman Islands is some 6,408 km²; that of the Nicobar Islands approximately 1,841 km².

The major languages spoken in the Andamans in numerical order are Bengali, , Tamil, and . Other languages include and English.

Andaman & Nicobar Islands are blessed with a unique tropical rainforest canopy, made of a mixed flora with elements from Indian, Myanmarese, Malaysian and endemic floral strains. So far, about 2,200 varieties of plants have been recorded, out of which 200 are endemic and 1,300 do not occur in mainland India.

The South Andaman forests have a profuse growth of vegetation, mostly ferns and orchids. The Middle Andamans harbours mostly moist deciduous forests. North Andamans is characterised by the wet evergreen type, with plenty of woody climbers. The north Nicobar Islands (including Car Nicobar and Battimalv) are marked by the complete absence of evergreen forests, while such forests form the dominant vegetation in the central and southern islands of the Nicobar group. Grasslands occur only in the Nicobars, and while deciduous forests are common in the Andamans, they are almost absent in the Nicobars. The present forest coverage is claimed to be 86.2% of the total land area.

Andaman Forest abounds in a plethora of timber species numbering 200 or more, out of which about 30 varieties are considered to be commercial. Major commercial timber species are Gurjan ( spp.) and Padauk ( dalbergioides). The following ornamental woods are noted for their pronounced grain formation:
# Marble Wood ( marmorata)
# Padauk (Pterocarpus dalbergioides)
# Silver Grey (a special formation of wood in white chuglam)
# Chooi (Sageraea elliptical)
# Kokko ( lebbeck)Padauk being sturdier than teak is widely used for furniture making.

This tropical rain forest despite its isolation from adjacent land masses is surprisingly rich with a diversity of animal life.

About 50 varieties of forest mammals are found to occur in the Andaman and Nicobar Islands. Some are endemic, including the Andaman Wild Boar. Rodents are the largest group with 26 species, followed by 14 species of bat. Among the larger mammals there are two endemicFact|Dec 2007|date=December 2007 varieties of wild boar, "Sus scrofa andamanensis" from Andaman and "S. s. nicobaricus" from Nicobar, which are protected by the Wildlife Protection Act 1972 (Sch I). The Spotted Deer "Axis axis", Barking Deer and Sambar were all introduced to the Andaman District, though the Sambar did not survive. Around 1962 there was an attempt to introduce the Leopard, which was unsuccessful because of unsuitable habitat. These were ill-considered moves as exotic introductions can cause havoc to island flora and fauna. Interview island (the largest wildlife sanctuary in the ANI) in Middle Andaman holds a population of feral elephants. These elephants were brought in for forest work by a timber company, which subsequently released them when it went bankrupt. This population has been subject to research studies.

ANI has also 270 species of birds (including endemics); the Nicobar island group has a higher endemicity than the Andamans and there are a total of 14 species endemic to ANI. The State Bird of the Andamans is the Andaman Wood pigeon. Some are:
*
*
* (a data deficient species [IUCN 2000] - endemic species
* Andaman Coucal, subspecies of - endemic subspecies

With about 225 species, the A&N Islands house some of the larger and most spectacular butterflies of the world. Ten species are endemic to these Islands. Mount Harriet National Park is one of the richest areas of butterfly and moth diversity on these Islands.

Shells are perhaps the most colourful and fascinating objects known to man other than gems since time immemorial. They served as money, ornaments, musical instruments, drinking cups, in magic and in the making of fine porcelains. They were also the symbols in rituals and religious observances, and the returning pilgrims wore them as a token of divine pardon.

These islands are traditionally known for their shell wealth, especially in the genera "Turbo", "", "" and "". Earliest recorded commercial exploitation began during 1929. Shells are important to these islands because some like turbo, trochus & nautilus etc. are used as novelties supporting many cottage industries producing a wide range of decorative items & ornaments. Shells such as giant clam, green mussel and oyster support edible shellfishery, a few like , , and cockle are burnt in kilns to produce edible lime.

A total of 48,675 hectares of land is used for agriculture purposes. Paddy, the main food crop, is mostly cultivated in Andaman group of islands, whereas coconut and areca nut are the cash crops of Nicobar group of islands. Field crops, namely, pulses, oilseeds and vegetables are grown, followed by paddy during Rabi season. Different kinds of fruits such as mango, sapota, orange, banana, papaya, pineapple and root crops are grown on hilly land owned by farmers. Spices, viz., pepper, clove, nutmeg, and cinnamon are grown under multi-tier cropping system. Rubber, red oil, palm and cashew are grown on a limited scale in these islands.

There are 1,374 registered small scale, village and handicrafts units. Two units are export oriented in the line of fish processing activity. Apart from this, there are shell and wood based handicraft units. There are also four medium sized industrial units. SSI units are engaged in the production of polythene bags, PVC conduit pipes and fittings, paints and varnished, fibre glass and mini flour mills, soft drinks and beverages, etc. Small scale and handicraft units are also engaged in shell crafts, bakery products, rice milling, furniture making , etc. The Andaman and Nicobar Islands Integrated Development Corporation has spread its wings in the field of tourism, fisheries, industries and industrial financing and functions as authorised agents for Alliance Air/Jet Airways.

This is a chart of trend of gross state domestic product of Andaman and Nicobar Islands at market prices [http://mospi.nic.in/mospi_nad_main.htm estimated] by "Ministry of Statistics and Programme Implementation" with figures in millions of Indian Rupees.

Andaman and Nicobar Islands' gross state domestic product for 2004 is estimated at $354 million in current prices.