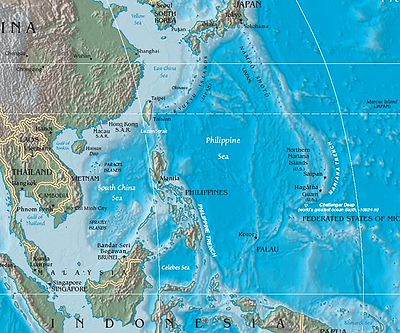 Mariana Islands at map-right, east of the Philippine Sea, and just west of the Mariana Trench in the ocean floor.

The Mariana Islands (also the Marianas; up to the early 20th century sometimes called Ladrones Islands, from Spanish Islas de los Ladrones meaning "Islands of Thieves") are an arc-shaped archipelago made up by the summits of 15 volcanic mountains in the north-western Pacific Ocean between the 12th and 21st parallels north and along the 145th meridian east. They are south of Japan and north of New Guinea, and immediately to the east of the Philippine Sea. The south end of the Marianas chain is the island of Guam. The islands were named after Spanish Queen Mariana of Austria in the 17th century, when Spain started the colonization of the archipielago.

The islands are part of a geologic structure known as the Izu-Bonin-Mariana Arc system, and range in age from 5 million years old in the north to 30 million years old in the south (Guam). The island chain arises as a result of the western edge of the Pacific Plate moving westward and plunging downward below the Mariana plate, a region which is the most volcanically active convergent plate boundary on Earth. This subduction region, just east of the island chain, forms the noted Mariana Trench, the deepest part of the Earth's oceans and lowest part of Earth's crust. In this region, according to geologic theory, water trapped in the extensive faulting of the Pacific Plate as serpentinite, is heated by the higher temperatures of depth during its subduction, and the pressure from the expanding steam results in the hydrothermal activity in the area, and the volcanic activity which formed the Mariana Islands.[1]

The Mariana Islands are the southern part of a submerged mountain range that extends 1,565 miles (2,519 km) from Guam to near Japan. Geographically, the Marianas are the northernmost islands of a larger island group called Micronesia, situated between 13° and 21°N latitude and 144° and 146°E longitude.

The Mariana Islands have a total land area of 389 square miles (1007 km²).[2] They are composed of two administrative units:

The island chain geographically consists of two subgroups, a northern group of ten volcanic main islands, of which only four (Agrihan, Anatahan, Alamagan and Pagan) are inhabited; and a southern group of five coralline limestone islands (Rota, Guam, Aguijan, Tinian and Saipan), all inhabited except Aguijan. In the northern volcanic group a maximum elevation of about 2,700 feet (820 m) is reached; there are craters showing signs of activity, and earthquakes are not uncommon. Coral reefs fringe the coasts of the southern isles, which are of slight elevation.

Near the islands can be found the lowest point in the Earth's crust, the Mariana Trench.

All the islands except Farallon de Medinilla and Uracas or Farallon de Pajaros (in the northern group) are more or less densely wooded, and the vegetation is dense, much resembling that of the Carolines, and also of the Philippines, from where species of plants have been introduced. Owing to the moistness of the soil cryptogams are numerous, as are also most kinds of grasses. On most of the islands there is a plentiful supply of water.

The fauna of the Marianas, though inferior in number and variety, is similar in character to that of the Carolines, and certain species are indigenous to both island groups. The climate though damp is healthy, while the heat, being tempered by the trade winds, is milder than that of the Philippines; the variations of temperature are not great. 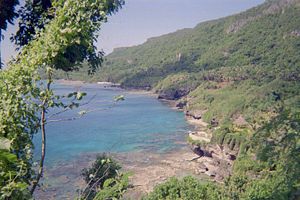 The islands are part of a geologic structure known as the Izu-Bonin-Mariana Arc system, and range in age from 5 million years old in the north to 30 million years old in the south (Guam). The islands are formed as the highly dense and very old western edge of the Pacific plate plunges downward to form the floor of the Mariana Trench, and carries trapped water under the Mariana plate as it does so. This water is heated and boiled as the plate is carried further downward, and results in the volcanic activity which has formed the arc of Mariana Islands above this subduction region.

The first European to see the island group was Ferdinand Magellan who on 6 March 1521 observed the two southernmost islands and sailed between them[3] during a Spanish expedition of world circumnavigation. Upon first landing at Umatac, Guam, Magellan's ships received fresh supplies from the native Chamorros. The common account is that the Chamorros, assuming that they were engaged in a trade,[citation needed] then took one of the Spanish landing boats. The Spanish crew, however, considered this theft and in retaliation attacked the Chamorros and dubbed the islands Islas de los Ladrones (Islands of the Thieves). However, according to Antonio Pigafetta's diary, there was no evidence that the natives thought that the Spaniards were engaging in trade and that they therefore had the implicit right to take the things from Magellan's ships. Pigafetta writes,

And the captain-general wished to approach the largest of these three islands to replenish his provisions. But it was not possible, for the people of those islands entered the ships and robbed us so that we could not protect ourselves from them. And when we wished to strike and take in the sails so as to land, they stole very quickly the small boat called a skiff which was fastened to the poop of the captain's ship. At which he, being very angry, went ashore with forty armed men. And burning some forty or fifty houses with several boats and killing seven men of the said island, they recovered their skiff.

The islands are still occasionally called the Ladrones. Magellan himself styled them Islas de las Velas Latinas (Islands of the Lateen Sails). San Lazarus archipelago, Jardines and Prazeres are among the names applied to them by later navigators.

In 1667 Spain formally claimed them, established a regular colony there, and gave the islands the official title of Las Marianas in honor of Spanish Queen Mariana of Austria, widow of Philip IV of Spain. They then had a population of more than 50,000 inhabitants, but many Chamorros died from the infectious diseases brought by the Spanish.[4]

The native population, who referred to themselves as "Tao Tao Tano" (people of the land)[5] but were known to the early Spanish colonists as Hachamori[citation needed] has died out as a distinct people, though their descendants intermarried. At the Spanish occupation in 1668, the Chamorros were estimated at 50,000, but a century later only 1,800 natives remained, as the majority of the population was of mixed Spanish-Chamorro blood or mestizo. They were characteristic Micronesians, with a considerable civilization. In the island of Tinian are some remarkable remains attributed to them, consisting of two rows of massive square stone columns, about 5 feet 4 inches (1.63 m) broad and 14 feet (4.3 m) high, with heavy-round capitals called latte stones. According to early Spanish accounts cinerary urns were found embedded in the capitals.[dubious – discuss]

Research in the archipelago was carried out by Commodore Anson, who in August 1742 landed upon the island of Tinian.[6] The Ladrones were visited by Byron in 1765, Wallis in 1767 and Crozet in 1772.

The Marianas and specifically the island of Guam were a stopover for Spanish galleons en route from Acapulco, Mexico to Manila, Philippines in a convoy known as the Galeon de Manila.

Loss from Spain, and split in governance

A U.S. Marine talks a terrified Chamorro woman and her children into abandoning their refuge. Battle of Saipan, 1944.

The Marianas remained a Spanish colony under the general government of the Philippines until 1898, when, as a result of the Spanish-American War, Spain ceded Guam to the United States. Guam has retained a different political character from the remaining islands since this time.

In the Treaty of 12 February 1899, the remaining islands of the Mariana archipelago (except Guam) were sold by Spain to Germany for 837,500 German gold marks (about $4,100,000 at the time). Along with 6000 islands in other island groups, such as the Carolines and Pelew Islands, all formerly under Spanish control but now indefensible by Spain, these islands were now incorporated as a small part of the larger German Protectorate of New Guinea. The total population in the Northern Marianas portion of these islands around this time was only 2,646 inhabitants; the ten most northerly islands being actively volcanic, and almost uninhabited.

Japan, a member of the Triple Entente, began to occupy the islands in 1914. After Germany and the rest of the Central Powers lost World War I, all formerly German-controlled islands in the Pacific were entrusted by the League of Nations to Japanese control, as mandate territories (similar to modern United Nations Trust Territories). These islands included the Northern Mariana Islands, but not Guam.

The island chain saw fighting between the US and Japanese forces in 1944 during World War II. Guam, a U.S. possession from 1898, was captured by Japan in an attack that began on the day after the attack on Pearl Harbor. The United States recaptured it in July 1944. The remaining islands were desired by the U.S. as bombing bases to reach the Japanese mainland, with Saipan attacked even before Guam. Once captured, the islands of Saipan and Tinian were used extensively by the United States military as they finally put mainland Japan within round-trip range of American bombers. In response, Japanese forces attacked the bases on Saipan and Tinian from November 1944 to January 1945. Both the Enola Gay and the Bockscar (which dropped atomic bombs on Hiroshima and Nagasaki, respectively) flew their missions from Tinian’s “North Field”.

The direct result of this conflict was that after the war, the Northern Mariana Islands came under U.S. control in the same way they had earlier come under control of Japan after World War I. They have not united with the territory of Guam, in part due to residual post-war tensions resulting from the very different histories of Guam (occupied by Japan for only 31 months, in wartime) and the Northern Mariana Islands (more peacefully occupied by Japan, for about 30 years).

The Prefecture Apostolic of the Marianas was erected on 17 September 1902, by the Constitution "Quae mari sinico" of Pope Leo XIII. The islands had previously formed part of the Philippine Diocese of Cebu. By Decree of 18 June 1907 they were entrusted to the Capuchin Fathers of the Westphalian Province, to which order the first Prefect Apostolic, Very Rev. Paul von Kirchhausen (appointed August, 1907; residence in Saipan, Carolina Islands), belonged. There were two public schools, but accommodation was so inadequate that the boys attended in the morning and the girls in the evening. The instruction was given in English, and in addition to the usual elementary subjects, carpentry and other trades were taught. Two priests were stationed at Agana on Guam; one in each of the smaller settlements, Agat and Merizo. In addition to the churches at these places, there is a church at Samay and several little chapels in the mountains. A priest from Agana visited each month the colony where the lepers are segregated, to celebrate Mass and administer the sacraments. Catholicism was the sole—and remains the primary—religion. 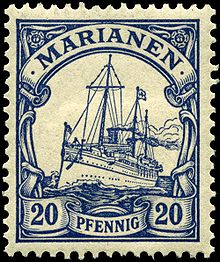 A 1901 stamp from the Mariana Islands