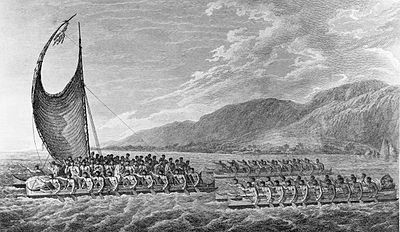 Various Māori traditions recount how their ancestors set out from their homeland in great ocean-going canoes (or waka). Some of these traditions name a mythical homeland called Hawaiki.

Among these is the story of Kupe, who had eloped with Kuramarotini, the wife of Hoturapa, the owner of the great canoe Matahourua, whom Kupe had murdered. To escape punishment for the murder, Kupe and Kura fled in Matahourua and discovered a land he called Aotearoa ('long-white-cloud'). He explored its coast and killed the sea monster Te Wheke-a-Muturangi, finally returning to his home to spread news of his newly discovered land.[1]

Other stories of various other tribes report migrations to escape famine, over-population, and warfare. These were made in legendary canoes, the best known of which are Aotea, Arawa, Kurahaupō, Mataatua, Tainui, Tākitimu, and Tokomaru. Various traditions name numerous other canoes. Some, including the Āraiteuru, are well known; others including the Kirauta and the sacred Arahura and Mahangaatuamatua are little known. Rather than arriving in a single fleet, the journeys may have occurred over several centuries. 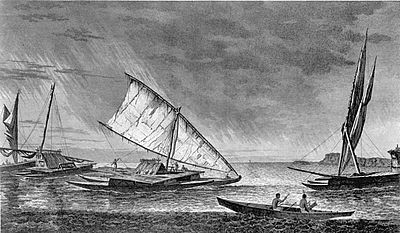 An important early collector and preserver of Maori traditions was the surveyor and ethnologist Stephenson Percy Smith.

Smith believed that while the Polynesian traditions may have been flawed in detail, they preserved the threads of truth which could be recovered using a method already well established for Hawaiian traditions by Fornander (1878–1885). This method involved seeking out common elements of tradition from different sources, and aligning these to genealogies to give a time frame for the events. Abraham Fornander, Smith, and others used this method to reconstruct the migrations of the Polynesians, tracing them back to a supposed ancient homeland in India.

S. Percy Smith used the Fornander method, combining disparate traditions from various parts of New Zealand and other parts of Polynesia, to derive the 'Great Fleet' hypothesis. Through an examination of the genealogies of various tribes, he came up with a set of precise dates for his 'Great Fleet' and the explorers that he and others posited as having paved the way for the fleet.

According to Te Ara Encyclopedia of New Zealand, "Smith’s account went as follows. In 750 AD the Polynesian explorer Kupe discovered an uninhabited New Zealand. Then in 1000–1100 AD, the Polynesian explorers Toi and Whātonga visited New Zealand, and found it inhabited by a primitive, nomadic people known as the Moriori. Finally, in 1350 AD a ‘great fleet’ of seven canoes – Aotea, Kurahaupō, Mataatua, Tainui, Tokomaru, Te Arawa and Tākitimu – all departed from the Tahitian region at the same time, bringing the people now known as Māori to New Zealand. These were advanced, warlike, agricultural tribes who destroyed the Moriori"[2]

The great fleet scenario won general acceptance, its adherents even including the famous Māori ethnologist Te Rangi Hīroa (Sir Peter Buck), and was taught in New Zealand schools. However it was effectively demolished during the 1960s by the ethnologist David Simmons, who showed that it derived from an incomplete and indiscriminate study of Māori tradition as recorded in the 19th Century. Simmons also suggests that some of these 'migrations' may actually have been journeys within New Zealand.[3]

Historian Rāwiri Taonui, writing in 2006 for the website Te Ara - the Encyclopedia of New Zealand, accuses Smith of falsification: "The Great Fleet theory was the result of a collaboration between the 19th-century ethnologist S. Percy Smith and the Māori scholar Hoani Te Whatahoro Jury. Smith obtained details about places in Rarotonga and Tahiti during a visit in 1897, while Jury provided information about Māori canoes in New Zealand. Smith then ‘cut and pasted’ his material, combining several oral traditions into new ones. Their joint work was published in two books, in which Jury and Smith falsely attributed much of their information to two 19th-century tohunga, Moihi Te Mātorohanga and Nēpia Pōhūhū" (Taonui 2006).