Maori Touring Team, 1888, which toured the UK in and played 74 matches in 25 weeks; beat Ireland, lost to England and Wales

New Zealand Māori is a rugby union team that traditionally plays teams touring New Zealand. A prerequisite for playing in this team is that the player is to have Māori whakapapa or genealogy. In the past this rule was not strictly applied. In the past non-Māori players who looked Māori were often selected in the team.[citation needed] These included a few Island players and a couple of African descent. Today all players have their ancestry verified before selection in the team and there is a 1/16 maori blood requirement[citation needed] Although the rugby union team does not compete in the World Cup, it competed in the Churchill Cup, which it won in 2004 and 2006. 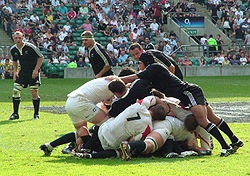 The Māoris playing the Saxons in 2007

In 1888–89, the 'New Zealand Natives' were the first overseas team to tour the Home Nations. At first the team was meant to comprise only Māori, but four "whites" were finally included to strengthen the combination. Before leaving New Zealand the team played nine matches for seven wins and two losses; and two matches (one won, one drawn) at Melbourne on the way to Europe. Once in the UK, they played three or four times a week for a total of 74 games for 49 wins, five drawn games, and 20 losses. Ireland were beaten (13–4) in Dublin, but Wales won (5–0) in Swansea, and England won (7–0) at Blackheath. They won 14 games on their return to Australia and seven of the eight played in New Zealand.

One of the New Zealand Natives' greatest legacies was the haka, a traditional Māori posture dance with vigorous movements and stamping of the feet, to the accompaniment of rhythmically shouted words; this was first performed during a match on 3 October against Surrey. The haka was later adopted by the New Zealand national team, the All Blacks, as were their black shirts (previous New Zealand sides had worn navy blue).

Since being given official status in 1910, the New Zealand Māori have produced some of world rugby union's most outstanding athletes, including fullback George Nepia who played 46 games for the All Blacks from 1924–30, halfback Sid Going who played 86 matches for his country and former All Blacks captain Tane Norton, who represented New Zealand in 61 games, including 27 tests, and later became President of the New Zealand Rugby Union.

The 1926–27 touring side, captained by Walter Barclay MM, is considered the best ever Māori team. In a seven-month tour which took place in Australia, Ceylon, France, Wales and Canada, the side played 38 matches, winning 29, losing seven and drawing two. Full-back George Nepia was left at home after missing the boat from Wellington.

In 2001, the Māori first performed the "Timatanga" haka, which describes the evolution of life and the creation of New Zealand from the four winds.

The team lost only four of its 26 games played between 1994 and 2004, including beating England, Argentina, Scotland and Fiji. The Māori continued their winning form in 2004 beating England A (now known as England Saxons) in extra time in the final of the Churchill Cup in Canada.

In 2005 the Māori beat the British and Irish Lions for the first time in an official match. Their preparations for this match forced them to withdraw from the 2005 Churchill Cup. They returned to that competition in 2006, defeating Ireland A and the USA in pool play in Santa Clara, California and Scotland A in the final in Edmonton, Alberta.

New Zealand Maori also replaced the Junior All Blacks in the 2008 Cup, where they were undefeated champions, narrowly beating Australia A in the final game of the tournament. The team did not compete in the 2008 Churchill Cup.

In 2010 to celebrate the Centenary of New Zealand's Maori Rugby team, a special commemorative stamp has been issued by New Zealand Post to pay tribute to the players, coaches, administrators and supporters who have taken New Zealand Maori rugby through the decades, overcoming challenges to emerge stronger and more relevant than ever.[1]