The Samoa national rugby union team is the representative side of Samoa in international rugby union. In Samoa, they are often called Manu Samoa, in honour of a famous Samoan warrior, and from 1924 to 1997 competed as Western Samoa. They perform a traditional Samoan challenge called the siva tau before each game. They were formerly members of the Pacific Islands Rugby Alliance (PIRA) along with Fiji and Tonga.[2] They are ranked 10th in the world. They have been funded by millionaire Sir Michael Fay, one of New Zealand's wealthiest men, since 1996.[3][4]

Rugby was introduced to Samoa in the early 1920s and a governing body was soon formed. The first international was played as Western Samoa against Fiji in August 1924. Along with Tonga, these nations would meet regularly and eventually contest competitions such as the Pacific Tri-Nations – with Western Samoa winning the first of these. Samoa have been to every Rugby World Cup since the 1991 tournament. That tournament, along with the 1995 competition saw them make the quarter-finals.

Under their new coach, the All Blacks legend Michael Jones (himself of Samoan descent and a Samoan international), Samoa worked hard to create a side able to compete effectively in the 2007 Rugby World Cup, where they were grouped with England, South Africa, Tonga and the USA. However, Samoa had a dismal World Cup campaign, defeating only the USA and finishing fourth in their group, which forced them to go through qualifying for the 2011 World Cup. The team however comfortably qualified with 188–19 aggregate win over Papua New Guinea. Jones resigned immediately after the World Cup; in January 2008, Niko Palamo, formerly the country's under-19 and sevens coach, was named as his replacement. He would later be replaced by former sevens coach Titimaea "Dicky" Tafua in 2009.[5]

Manu Samoa play in blue and white uniforms. They do not train on Sundays because many of the team are devout Christians.

The Marist Brothers brought the game of rugby to Western Samoa in 1920 and The Western Samoa Rugby Football Union was formed in 1924. On 18 August 1924, Western Samoa played its first international against Fiji in the capital Apia, the visitors winning 6–0. The match was played at 7am to allow the Samoans time to get to work afterwards and was played on a pitch with a large tree on the halfway line. The return match was won 9–3 by Samoa to draw the series.

In 1954 Western Samoan visited both Pacific Island neighbors Fiji and Tonga but had to wait a further 20 years before a tour of New Zealand took place. The Samoans won one of eight matches on that tour.

The following year a 14-match tour of Europe took place before a World Cup elimination series in Tokyo, which gave Western Samoa a place in the 1991 Rugby World Cup in Britain. They made a huge impact. After sweeping aside Wales 16–13 in Cardiff and defeating Argentina 35–12, and narrowly losing 3–9 to eventual champions Australia in their pool match, Western Samoa, a country with a population of 160,000, found itself in the quarterfinals against Scotland at Murrayfield. The Scots won comfortably 28–6, but the Samoans were clearly the personality team of the tournament.

Over the next two years the side had a number of notable wins. The most outstanding achievement were in Sevens where it won the 1993 Hong Kong and 1992 Middlesex Sevens. The 1995 Rugby World Cup in South Africa proved that the team belonged in top company. They again reached the quarterfinals after wins over Argentina and Italy, but were beaten 42–14 by the eventual winners South Africa. After the Cup, Manu Samoa made a 13-match tour of England and Scotland, drawing 15–15 with the Scots and going down 27–9 to England.

With the advent of professional rugby in 1995 it was vital for Manu Samoa to develop a new administrative structure. This was made possible with Fay Richwhite and the Western Samoan Rugby Union joining forces to form Manu Samoa Rugby Limited, which now manages business for the team. Samoa emerged from the 1999 World Cup with its honor intact after another shock 38–31 victory over host nation Wales in the pool stages. They again lost out to Scotland in the quarter final play-off.

Manu Samoa qualified for the 2003 World Cup with a 17–16 loss against Fiji, Earl Va'a missing an injury-time penalty. They recovered to beat Tonga both home and away and avenged that Fijian defeat with a 22–12 win in Nadi. They ultimately had to settle for second place in the round robin, behind Fiji on points difference, and a place in the tougher of the two Rugby World Cup 2003 pools alongside automatic qualifiers England and South Africa. In one of the games of the tournament, they led eventual champions England for most of the game before losing 35–22.

Samoa began their 2011 World Cup campaign preparation with a flying start, after registering an upset against No.2 ranked Australia with a four-try-to-two win of 32–23.[7]

Western Samoa's triumph in the 1991 Rugby World Cup was inspired by their assistant coach Bryan Williams who was a New Zealand born (but of Samoan descent) All Black great of the 1970s. The 1991 Samoan World Cup team included many New Zealand born or raised players, the catalyst was Auckland prop Peter Fatialofa, who in 1989, became the first major New Zealand-based player to decide to play for Samoa. By the time of the 1991 World Cup several other New Zealand born Samoans like Pat Lam, Stephen Bachop, Frank Bunce and Apollo Perelini had joined him. It was around this time that players of Samoan descent, the children of the mass-migration of the 1960s and 70s, were beginning to make large waves in New Zealand rugby. Some like Michael Jones were New Zealand born while others like Inga Tuigamala had immigrated at a young age. The number of Samoan-born players to represent the All Blacks increased in the 1990s. However, many of these players have been educated in New Zealand from an early age, developing their rugby skills within the very challenging New Zealand secondary schools competition. Mils Muliaina, Jerry Collins, Isaia Toeava and Casey Laulala are just four of the many Samoan-born players who have chosen to represent New Zealand, after having been educated there. eniasi tokelau

In recent times[when?] New Zealanders of Samoan descent have been key members of the All Blacks squad, including former New Zealand captain Tana Umaga. In some Test matches on their 2005 Grand Slam tour of the Home Nations New Zealand fielded a side packed with players of Samoan descent. New Zealand born players with Samoan parentage have also played for Samoa, such as Earl Va'a, Pat Lam and Lome Fa'atau.

The rugby relationship that exists between New Zealand and Samoa is undoubtedly a complex one. Close ties exist between the two countries, these bonds first being formed with the start of mass Polynesian migration to New Zealand in the latter half of the twentieth century. Naturally, many players eligible for Samoa have chosen to play for the All Blacks, recognising the obvious potential for financial and sporting rewards. Also, unfortunately, because of current international eligibility laws, many Samoans who commit themselves to playing for the All Blacks find that they are unable to play for the smaller nation when their dreams of pulling on the black shirt are unrealised. 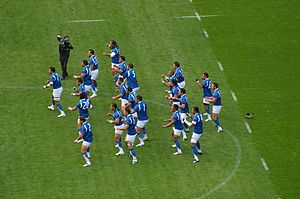 In one of the scenes of the feature film, Invictus, Western Samoa can be seen playing South Africa in the 1995 Rugby World Cup.

Fuimaono Tafua Note: Flags indicate national union for the club/province as defined by the International Rugby Board.

7 non-travelling reserves were also named. Note: Flags indicate national union for the club/province as defined by the International Rugby Board.