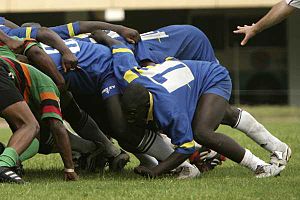 Zambia national rugby union team is a third tier rugby union side representing Zambia. They first played in 1975 and now compete on an annual basis in the Africa Cup. They have yet to qualify for the Rugby World Cup.

Rugby union in Zambia is administered by the Zambian Rugby Union. One of the greatest rugby union players of all-time and the world's most capped player, Australian player George Gregan, was born in Lusaka, Zambia in 1973. Springbok Corne Krige was also born in Lusaka, to a white Zambian family.

Zambia were not invited to the original world cup in 1987 in New Zealand. They did not enter the first two tournaments that were open to qualification in 1991 and 1995. They first attempted to qualify for the 1999 Rugby World Cup. Between then and RWC 2011 qualification attempts have been very unsuccessful, with elimination coming in the 1st Round every time. The most successful attempt was for the RWC 2007 were they got through their group as winners only to be beaten by Senegal in a playoff for a place in Round 2.

Round 1a: Southern Pool