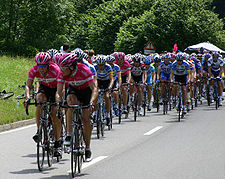 The peloton of the Tour de France

All bicycle races involve diamond frame bicycles of two triangles, generally composed of various steel alloys (with Cr–Mo), aluminum, or carbon fiber. An alternative is the recumbent, a bicycle on which the rider sits back with the legs horizontal. This puts the body in a position where there is less wind drag. Proponents claim it provides more comfortable riding, with no weight on the wrists. The recumbent is a more aerodynamic design of bicycle, and world speed records were set with them.

Bicycle races are popular all over the world, especially in Europe. The countries most devoted to bicycle racing are Italy, Spain, Belgium, Germany, Denmark, France, the Netherlands, and Switzerland, although the United States has international standing, as do Australia, Luxembourg, and the UK.

Road bicycle races typically take place from spring through to fall. Many riders from the northern hemisphere spend the winter in countries such as Australia, to compete or train. Professional races range from the multi-day "Grand Tour" stage races such as the Tour de France, Giro d'Italia and the Vuelta a España to single day "Classics" such as the Ronde van Vlaanderen and Milan – San Remo. The longest one-day road race sanctioned by USA Cycling is Lotoja which covers the 206 miles (332 km) from Logan, Utah to Jackson, Wyoming. Criteriums are races based on circuits typically less than a mile in length and sometimes run for a set time (60min, 90min, etc.) rather than a specific distance. Criteriums are the most popular form of road racing in North America. In Belgium, kermesses are popular, single-day events of usually 120+km. As well as road races in which all riders start simultaneously, individual time trial and team time trial events are also held on road-based courses.

Cycle-racing has a long history 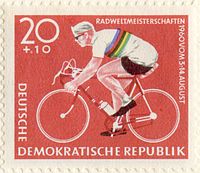 The first bicycle race is popularly held to have been a 1,200 meter race on the 31 May 1868 at the Parc de Saint-Cloud, Paris. It was won by expatriate Englishman James Moore who rode a wooden bicycle with iron tires.[1] The machine is now on display at the museum in Ely, Cambridgeshire, England.

The Union Cycliste Internationale was founded on 14 April 1900 by Belgium, the United States, France, Italy, and Switzerland to replace the International Cycling Association, which had been formed in 1892, over a row with Great Britain as well as because of other issues. 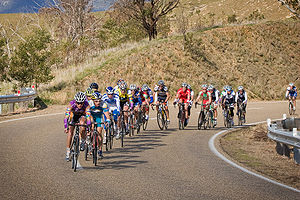 Road races may involve both team and individual competition, and are contested in various ways. They range from the one-day road race, criterium, and time trial to multi-stage events like the Tour de France and its sister events which make up cycling's Grand Tours.

Track cycling encompasses races that take place on banked tracks or velodromes. Events are quite diverse and can range from individual and team pursuits, two-man sprints, to various group and mass start races. Competitors use track bicycles which do not have brakes or freewheels.

Cyclo-cross originated as a sport for road racers during the off season, to vary their training during the cold months. Races typically take place in the autumn and winter (the international or World Cup season is September–January) and consist of many laps of a 2–3 km or 1–2 mile course featuring pavement, wooded trails, grass, steep hills, and obstacles requiring the rider to dismount, carry the bike and remount in one motion. Races for senior categories are generally between 30 minutes and an hour long, the distance varying depending on the conditions. The sport is strongest in traditional road cycling countries such as Belgium (Flanders in particular) and France.

Mountain bike racing is relatively new. It became popular during the 1990s.[citation needed] Mountain bike races are off-road and usually involve a moderate degree of technical riding. There are several varieties; the main categories are cross-country and downhill but also 4X or four cross racing. Mountain bike racing and riding requires wide knobby tires with a deep tread.

Trophy from the Deutschland Tour (Tour of Germany)

Bike trials is a sport where riders navigate natural and man-made obstacles without putting down their foot, or "dabbing". It is similar to motorcycle trials. Points are awarded for bike handling skills.

Motor-paced racing and Keirin use motorcycles for pacing so bicyclists achieve higher speeds.

Speeds achieved on indoor tracks are usually greater than those on roads. Other factors affecting speed are the route profile (flats and hills), wind conditions, temperatures and elevation. At a 2009 event in Russia, Kevin Sireau achieved an average of 20.73 meters/sec with a flying start over 200 meters. The speed over 1000 meters at the 2004 Athens Olympic Games was 16.39 meters/sec recorded by Chris Hoy. Average speeds clearly drop with increasing distance, so that over the 120 km Cootamundra Annual Classic it is 11.78 meters/sec. In the 259 km 2010 Paris-Roubaix, the winner set a speed of 10.92 meters/sec, while over the 818 km Furnace Creek 508, the speed drops dramatically to 8.34 meters/sec. For an extreme road distance such as the 4800 km Race Across America, the average speed of the record holder is 5.65 meters/sec, while the 2350 km Freedom Trail over mountainous terrain in South Africa is at a record speed of 1.9 meters/sec.