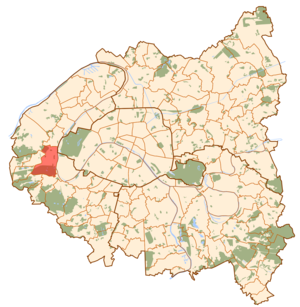 Saint-Cloud is a commune in the western suburbs of , . It is located 9.6 kilometres (6 mi) from the center of Paris.

The town is named after , grandson of Clovis, who is supposed to have sought refuge in the hamlet of . Canonized after his death, the village where his tomb was located took the name of Sanctus Clodoaldus.

A park contains the ruins of the , built in 1572 and destroyed by fire in 1870, during the . The château was the residence of several French rulers, and served as the main country residence of the cadet Orléans line prior to the . The palace was also the site of the "coup d'état" led by Napoleon Bonaparte that overthrew the in 1799.

From 1966, the Headquarters of the International Criminal Police Organization () was located at 22 Rue Armengaud until 1989 when it moved to Lyon.

The main landmarks are the park of the demolished and the . The , a race track for , was built by in 1901 and is host to a number of important races including the annual .

Saint-Cloud is served by two stations on the and suburban rail lines: Le Val d'Or and Saint-Cloud.

The town is also served by a number of stops on the T2 Tramway, which runs along the side of the Seine.

Central Saint-Cloud, known as "Le Village", is also served by the metro station 'Boulogne-Pont de Saint-Cloud' (line 10), located across the Seine river on the Boulogne-Billancourt side of the "Pont de Saint Cloud".