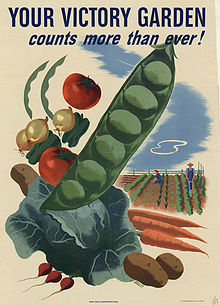 Victory gardens, also called war gardens or food gardens for defense, were vegetable, fruit and herb gardens planted at private residences and public parks in United States, United Kingdom, Canada and Germany[1] during World War I and World War II to reduce the pressure on the public food supply brought on by the war effort. In addition to indirectly aiding the war effort these gardens were also considered a civil "morale booster" — in that gardeners could feel empowered by their contribution of labor and rewarded by the produce grown. This made victory gardens become a part of daily life on the home front.

In March 1917, Charles Lathrop Pack organized the National War Garden Commission and launched the war garden campaign. During World War I, food production had fallen dramatically, especially in Europe, where agricultural labor had been recruited into military service and remaining farms devastated by the conflict. Pack conceived the idea that the supply of food could be greatly increased without the use of land and manpower already engaged in agriculture, and without the significant use of transportation facilities needed for the war effort. The campaign promoted the cultivation of available private and public lands, resulting in over five million gardens[2] and foodstuff production exceeding $1.2 billion by the end of the war.[3]

Amid regular rationing of canned food in Britain, a poster campaign ("Plant more in '44!") encouraged the planting of victory gardens by nearly 20 million Americans. These gardens produced up to 40 percent of all the vegetable produce being consumed nationally.[4]

It was emphasized to home front urbanites and suburbanites that the produce from their gardens would help to lower the price of vegetables needed by the US War Department to feed the troops, thus saving money that could be spent elsewhere on the military: "Our food is fighting," one US poster read.[5]

Although at first the Department of Agriculture objected to Eleanor Roosevelt's institution of a victory garden on the White House grounds, fearing that such a movement would hurt the food industry,[6] basic information about gardening appeared in public services booklets distributed by the Department of Agriculture, as well as by agribusiness corporations such as International Harvester and Beech-Nut. The US Department of Agriculture estimates that more than 20 million victory gardens were planted. Fruit and vegetables harvested in these home and community plots was estimated to be 9-10 million tons, an amount equal to all commercial production of fresh vegetables.

Victory gardens were planted in backyards and on apartment-building rooftops, with the occasional vacant lot "commandeered for the war effort!" and put to use as a cornfield or a squash patch. During World War II, sections of lawn were publicly plowed for plots in Hyde Park, London to publicize the movement. In New York City, the lawns around vacant "Riverside" were devoted to victory gardens, as were portions of San Francisco's Golden Gate Park.

In 1946, with the war over, many residents did not plant victory gardens in expectation of greater produce availability. However, shortages remained in the United Kingdom.

The Fenway Victory Gardens in the Back Bay Fens of Boston, Massachusetts and the Dowling Community Garden in Minneapolis, Minnesota, remain active as the last surviving public examples from World War II. Most plots in the Fenway Victory Gardens now feature flowers instead of vegetables while the Dowling Community Garden retains its focus on vegetables.

The United States Department of Agriculture issued a 20 minute film to promote and train people how to plant victory gardens titled Victory Garden.

The successful WGBH public television series The Victory Garden, given wide distribution in the U.S. over the Public Broadcasting Service, took the familiar expression to promote composting and intensive cropping for homeowners who wanted to raise some vegetables (and some flowers). It has continued for over three decades.