The Corn Laws were trade barriers designed to protect cereal[1] producers in the United Kingdom of Great Britain and Ireland against competition from less expensive foreign imports between 1815 and 1846. The barriers were introduced by the Importation Act 1815 (55 Geo. 3 c. 26) and repealed by the Importation Act 1846 (9 & 10 Vict. c. 22). These laws are often viewed as examples of British mercantilism,[2] and their abolition marked a significant step towards free trade. The Corn Laws enhanced the profits and political power associated with land ownership.

In 1813, a House of Commons Committee recommended excluding foreign-grown corn until domestically grown corn reached £4 (2010: £202.25) per quarter (1 quarter = 480 lb / 218.8 kg). The political economist Thomas Malthus believed this to be a fair price, and that it would be dangerous for Britain to rely on imported corn as lower prices would reduce labourers' wages, and manufacturers would lose out due to the fall in purchasing power of landlords and farmers.[3] However David Ricardo believed in free trade so Britain could use its capital and population to her comparative advantage.[3] With the advent of peace in 1814, corn prices dropped, and the Tory government of Lord Liverpool passed the 1815 Corn Law. This led to serious rioting in London.[4]

In 1820 the Merchants' Petition, written by Thomas Tooke, was presented to the Commons demanding free trade and an end to protective tariffs. Lord Liverpool claimed to be in favour of free trade but argued that complicated restrictions made it difficult to repeal protectionist laws. He added, though, that he believed Britain's economic dominance grew in spite of, not because of, the protectionist system.[5] In 1821 the President of the Board of Trade, William Huskisson, drew up a Commons Committee report which called for a return to the "practically free" trade of the pre-1815 years.[6] The Importation Act 1822 decreed that corn could be imported when domestically harvested corn reached 80 shillings but imported corn was prohibited when the price fell to 70 shillings per quarter. After the passing of this Act until 1828 the corn price never rose to 80 shillings. In 1827 the landlords rejected Huskisson's proposals for a sliding scale and in the next year Huskisson and the new Prime Minister, the Duke of Wellington, devised a new sliding scale for the Importation of Corn Act 1828 whereby when domestic corn was 52 shillings per quarter or less, the duty would be 34 shillings, 8 pence and when the price rose to 73 shillings the duty declined to 1 shilling.[7] 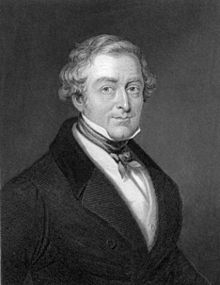 Robert Peel became Conservative Prime Minister in 1841 and his government succeeded in repealing the tariffs.

In 1838 Villiers spoke to a meeting of 5,000 "working class men" in Manchester. At the time, he proclaimed that the presence of so many of them demonstrated that he had their support. In 1840 the Committee on Import Duties led by Villiers published a blue book looking at the effects of the Corn Laws. Tens of thousands of copies were printed in pamphlet form by the Anti-Corn Law League, the report was quoted in the leading newspapers of the day, reprinted in America and published in an abridged form by The Spectator.

In 1841 Sir Robert Peel became Conservative Prime Minister and Richard Cobden, a leading free trader, was elected for the first time. Peel had studied the works of Adam Smith, David Hume and Ricardo and proclaimed in 1839: "I have read all that has been written by the gravest authorities on political economy on the subject of rent, wages, taxes, tithes".[8] However he voted against repeal in every year from 1837 to 1845. In 1842 in response to the blue book published by Villiers' 1840 Committee on Import Duties, Peel gave the concession of modifying the sliding scale by reducing the top duty to 20 shillings when the price fell to 51 shillings or less.[7] Peel's acolyte Monckton Milne MP said of Villiers at the time of this concession in 1842 that he was "the solitary Robinson Crusoe sitting on the rock of Corn Law repeal".

The landlords claimed that manufacturers like Cobden wanted cheap food so they could drive down wages and thus maximise their profits, a view shared by the socialist Chartist movement. Karl Marx[9] said: "The campaign for the abolition of the Corn Laws had begun and the workers' help was needed. The advocates of repeal therefore promised, not only a Big Loaf (which was to be doubled in size) but also the passing of the Ten Hours Bill" (i.e. to reduce working hours).

The Anti-Corn Law League, founded in 1838, was peacefully agitating for repeal. They funded writers like William Cooke Taylor to travel the manufacturing regions of northern England to research their cause.[10] Taylor published a number of books as an Anti-Corn Law propagandist, most notably, The Natural History of Society (1841), Notes of a tour in the manufacturing districts of Lancashire (1842), and Factories and the Factory System (1844). Cobden and the rest of the Anti-Corn Law League believed in the view that cheap food meant higher wages and Cobden praised a speech by a working man who said:

When provisions are high, the people have so much to pay for them that they have little or nothing left to buy clothes with; and when they have little to buy clothes with, there are few clothes sold; and when there are few clothes sold, there are too many to sell, they are very cheap; and when they are very cheap, there cannot be much paid for making them: and that, consequently, the manufacturing working man's wages are reduced, the mills are shut up, business is ruined, and general distress is spread through the country. But when, as now, the working man has the said 25s. left in his pocket, he buys more clothing with it (ay, and other articles of comfort too), and that increases the demand for them, and the greater the demand...makes them rise in price, and the rising price enables the working man to get higher wages and the masters better profits. This, therefore, is the way I prove that high provisions make lower wages, and cheap provisions make higher wages.[11]

The Economist was founded in September 1843 by James Wilson with help from the Anti-Corn Law League; his son-in-law Walter Bagehot later became the editor of this newspaper.

In February 1844, the Duke of Richmond founded the Central Agricultural Protection Society (CAPS, commonly known as the "Anti-League") to campaign in favour of the Corn Laws.

During 1844, the agitation subsided as there were fruitful harvests. The situation changed in late 1845 with poor harvests and the Great Famine in Ireland; Britain faced scarcity and Ireland starvation.[12] Peel argued in Cabinet that tariffs on grain should be rescinded by Order in Council until Parliament assembled to repeal the Corn Laws. His colleagues resisted this. Shortly afterwards the Whig leader Lord John Russell declared in favour of repeal. On 4 December 1845 an announcement appeared in The Times that the government had decided to recall Parliament in January 1846 to repeal the Corn Laws. Lord Stanley resigned from the Cabinet in protest. The next day Peel resigned as Prime Minister because he did not believe he could carry out his policy and so the Queen sent for Russell to form a government. Russell offered Cobden the post of Vice-President of the Board of Trade but he refused, preferring to remain an advocate of free trade outside the government.[13] By 20 December Russell was unable to form a ministry and so Peel remained Prime Minister.

After Parliament was recalled the CAPS started a campaign of resistance. In the counties the CAPS was practically supplanting the local Conservative associations and in many areas the independent free holding farmers were resisting the most fiercely.[14]

On 27 January 1846, Peel gave a three-hour speech saying that the Corn Laws would be abolished on 1 February 1849 after three years of gradual reductions of the tariff, leaving only a 1 shilling duty per quarter.[15] Benjamin Disraeli and Lord George Bentinck emerged as the most forceful opponents of repeal in Parliamentary debates, arguing that repeal would socially and politically weaken the traditional landowners and therefore destroy the "territorial constitution" of Britain by empowering commercial interests.[16]

On the third reading of Peel's Bill of Repeal (Importation Act 1846) on 15 May, MPs voted 327 votes to 229 (a majority of 98) to repeal the Corn Laws. On 25 June the Duke of Wellington persuaded the House of Lords to pass it. On that same night Peel's Irish Coercion Bill was defeated in the Commons by 292 to 219 by "a combination of Whigs, Radicals, and Tory protectionists".[17] On 29 June Peel resigned as Prime Minister and in his resignation speech he attributed the success of repeal to Cobden:

As a result the Conservative Party split and the Whigs under Russell formed a government. Those Conservatives who were loyal to Peel were known as the Peelites and included the Earl of Aberdeen and William Ewart Gladstone. In 1859 the Peelites merged with the Whigs and the Radicals to form the Liberal Party. Disraeli became overall Conservative leader in 1868, although, when Prime Minister, he did not attempt to reintroduce protectionism.

Scholars have advanced several explanations to resolve the puzzle of why Peel undertook the seemingly irrational decision to sacrifice his government to repeal the Corn Laws, a policy which he had long opposed. Lusztig (1995) argues that his actions were sensible when viewed in the context of his concern for preserving aristocratic government and a limited franchise in the face of threats from popular unrest. Peel was primarily concerned with preserving the institutions of government, and he viewed reform as an occasional necessary evil to head off the possibility of much more radical or tumultuous actions. He acted to check the expansion of democracy by ameliorating conditions which could provoke democratic agitation. He also took care to ensure that concessions would represent no threat to the British constitution.[19]

The price of corn in the two decades after 1850 averaged 52 shillings.[20] Due to the development of cheaper shipping (both sail and steam), faster and thus cheaper transport by rail and steamboat, and the modernisation of agricultural machinery, the prairie farms of North America were able to export vast quantities of cheap corn, as were peasant farms in the Russian Empire with simpler methods but cheaper labour. Every corn-growing country decided to increase tariffs in reaction to this, except Britain and Belgium.[21] In 1877 the price of British-grown corn averaged 56 shillings, 9 pence a quarter and for the rest of the nineteenth century it never reached within 10 shillings of that figure. In 1878 the price fell to 46 shillings, 5 pence. By 1885 corn-growing land declined by a million acres (4,000 km²) (28½%) and in 1886 the corn price fell to 31 shillings a quarter. Britain's dependence on imported grain in the 1830s was 2%; in the 1860s it was 24%; in the 1880s it was 45%, for corn it was 65%.[22] The 1881 census showed a decline of 92,250 in agricultural labourers since 1871, with a 53,496 increase of urban labourers. Many of these had previously been farm workers who later migrated to the cities to find employment,[23] despite agricultural labourers' wages being the highest in Europe.[23]

Although highly proficient farmers on good lands did well, farmers with mediocre skills or marginal lands were at a disadvantage. Many moved to the cities, and unprecedented numbers emigrated. Many emigrants were small, undercapitalized grain farmers who were squeezed out by low prices and inability to increase production or adapt to the more complex challenge of raising livestock.[24] Similar patterns developed in Ireland, where cereal production was labour intensive. The reduction in grain prices reduced the demand for agricultural labour in Ireland, and reduced the output of barley, oats, and wheat. These changes occurred at the same time that emigration was reducing the labour supply and pushing wage rates upward to levels too high for arable farmers to sustain.[25]