This article is about an Act of Parliament in the United Kingdom. For other uses, see NMWA (disambiguation).

The National Minimum Wage Act 1998 creates a minimum wage across the United Kingdom, currently £6.08 per hour for workers aged 21 years and older, £4.98 per hour for workers aged 18–20.[1] It was a flagship policy of the Labour Party in the UK during its 1997 election campaign and is still pronounced today in Labour Party circulars as an outstanding gain for ‘at least 1.5 million people’. The national minimum wage (NMW) took effect on 1 April 1999.

No national minimum wage existed prior to 1998, although there were a variety of systems of wage controls focused on specific industries under the Trade Boards Act 1909. Part of the reason for Labour's minimum wage policy was the decline of trade union membership over recent decades (weakening employees' bargaining power), as well as a recognition that the employees most vulnerable to low pay (especially in service industries) were rarely unionised in the first place. The implementation of a wage was opposed by the opposition Conservative Party and Liberal Democrats.

A £4.51 a day deduction can be made for living accommodation. No extra benefits such as redundancy, pension payments, loans, or awards can be counted as pay. The NMW rates are reviewed each year by the Low Pay Commission and from 1 October 2011: 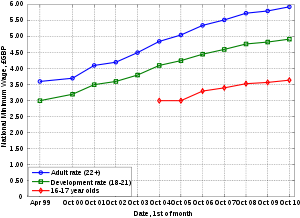 The National Minimum Wage Act 1998 is universally applicable to ordinary workers (section 1(2)), that is, anyone who has a contract to do work, except for a consumer or a client (section 54(3)). Expressly included are those working through job agencies (section 34), so that the agencies' charges must not eat into a worker's basic entitlement. Home-workers are also included expressly, and the Secretary of State can make order for other inclusions. The Secretary of State can also make exclusions, as has been done for au pairs and family members in family business. Excluded by the Act are fishermen paid in a share of profits, unpaid volunteers and prisoners (sections 43-45).

The hours that are used in a national minimum wage calculation are dependent upon work type as defined within the National Minimum Wage Regulations 1999. The different work types are time work, salaried hours work, output work and unmeasured work. Hours to be paid for are those worked in the "pay reference period", but where pay is not contractually referable to hours, such as pay by output, then the time actually worked must be ascertained. The principle is a very basic one: that hours worked should never as a whole be paid below the minimum. Excluded from "worked" are periods when the worker is on industrial action, time travelling to and from work and absent periods. When a worker is required to be awake and available for work, then they must also be paid, however this does not prevent so called "zero hour contracts" being used. That means you are guaranteed no hours, theoretically you are under no obligation, but it is strongly in your interest to be ready to work if your employer requests.

The NMW is enforceable by a contractual claim or through section 13 of the Employment Rights Act 1996 or if the exploited worker demands to see his employer's records and is refused. Section 18 provides for compensation to the order of 80 times the minimum wage. Employers must not subject their workers to dismissal or any other detriment (section 25 and section 23). Nevertheless employees may not wish to take the risk while employed. (Some employees might not enforce their rights even if dismissed, such as illegal immigrants, who face being sent home if they claim.) Administrative enforcement by Inspectors (section 14) provides more help. Inspectors may order compliance and payment (section 19). This may be appealed by the employer, but ongoing failure to comply entails cumulative penalties. However, the effectiveness of inspection is limited by the resources given to inspect. 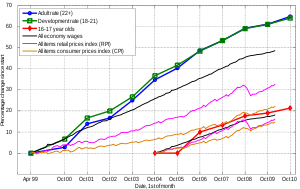 Comparisons of the changes in the National Minimum Wage to average earnings and inflation. The minimum wage has grown well ahead of both.

The Office for National Statistics produces information about the lower end of the earnings distribution and estimates for the number of jobs paid below the national minimum wage.[3] The figures are based on data from the Annual Survey of Hours and Earnings.

The current Mayor of London Boris Johnson, a Conservative, has supported the London Living wage since coming to office, ensuring that all city hall employees and subcontracted workers earn at least £7.60 an hour and promoting the wage to employers across the city. In May 2009 his Greater London Authority Economics unit raised the London Living Wage for City Hall employees to its current rate of £7.60, £1.80 more than the then minimum wage of £5.80.[6]

The policy is criticised for its separate tier of payment for 18 to 21 year olds, who are expected to pay tax, or pay £3,000 per year in top-up fees for university, and pay National Insurance, yet can still be paid 96p per hour less than other adults.[7]