Prairies (UK: /ˈprɛər.i/, US: /ˈprɛr.i/) are considered part of the temperate grasslands, savannas, and shrublands biome by ecologists, based on similar temperate climates, moderate rainfall, and grasses, herbs, and shrubs, rather than trees, as the dominant vegetation type. Temperate grassland regions include the Pampas of Argentina, Brazil and Uruguay as well as the steppes of Eurasia.

Lands typically referred to as "prairie" tend to be in North America. The term encompasses the area referred to as the Interior Lowlands of the United States, Canada and Mexico, which includes all of the Great Plains as well as the wetter, somewhat hillier land to the east. In the U.S., the area is constituted by most or all of the states of North Dakota, South Dakota, Nebraska, Kansas, and Oklahoma, and sizable parts of the states of Montana, Wyoming, Colorado, New Mexico, Texas, Missouri, Iowa, Illinois, Indiana, Wisconsin, and western and southern Minnesota. The Central Valley of California is also a prairie. The Canadian Prairies occupy vast areas of Manitoba, Saskatchewan, and Alberta. 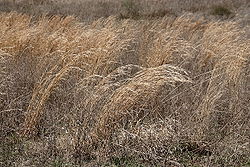 The formation of the North American Prairies started with the upwelling of the Rocky Mountains. The mountains created a rain shadow that killed most of the trees.[citation needed]

The parent material of most prairie soil was deposited during the last glacial advance that began about 110,000 years ago. The glaciers expanding southward scraped the landscape, picking up geologic material and leveling the terrain. As the glaciers retreated about 10,000 years ago, it deposited this material in the form of till. Wind based loess deposits also form an important parent material for prairie soils. [1]

Tallgrass Prairie evolved over tens of thousands of years with the disturbances of grazing and fire. Native ungulates such as bison, elk, and white-tailed deer, roamed the expansive, diverse, plentiful grassland before European colonization of the Americas.[2] For 10,000-20,000 years native people used fire annually as a tool to assist in hunting, transportation and safety.[3] Evidence of ignition sources of fire in the tallgrass prairie are overwhelmingly human as opposed to lightning.[4] Humans, and grazing animals, were active participants in the process of prairie formation and the establishment of the diversity of graminoid and forbs species. Fire has the effect on prairies of removing trees, clearing dead plant matter, and changing the availability of certain nutrients in the soil from the ash produced. Fire kills the vascular tissue of trees, but not prairie, as up to 75% (depending on the species) of the total plant biomass is below the soil surface and will re-grow from its deep (up to 6 feet) roots. Without disturbance, trees will encroach on a grassland, cast shade, which suppresses the understory. Prairie and widely spaced oak trees evolved to coexist in the oak savanna ecosystem.[5]

In spite of long recurrent droughts and occasional torrential rains, the grasslands of the Great Plains are not subject to great soil erosion. The root systems of prairie grasses firmly hold the soil in place and prevent run-off of soil. When a plant dies, the fungi, bacteria and the other slowly eat the roots and leaves, returning nutrients to the soil.

These deep roots also help prairie plants to reach water in even the driest conditions. The grass suffers much less damage from dry conditions than the farm crops that have replaced many former prairies.

In wet prairie, the soil is usually very moist most of the growing season and has poor water drainage. This can possibly contain a bog or fen, since it often has plentiful stagnant water. This type of prairie has the best type of farming soil.

Mesic prairie (English pronunciation: /ˈmiːzɪk/) has good drainage, but good soil during the growing season. This type of prairie is the most often converted for agricultural usage, consequently it is one of the more endangered types of prairie.

Dry prairie has somewhat wet to very dry soil during the growing season because of good drainage in the soil. Often, this prairie can be found on uplands or slopes. 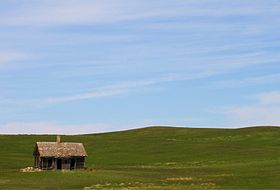 The very dense soil plagued the first settlers who were using wooden plows, which were more suitable for loose forest soil. On the prairie the plows bounced around and the soil stuck to them. This problem was solved in 1837 by an Illinois blacksmith named John Deere who developed a steel moldboard plow that was stronger and cut the roots, making the fertile soils ready for farming.

The tallgrass prairie has been converted into one of the most intensive crop producing areas in North America. Less than one tenth of one percent (<0.09%) of the original landcover of the tallgrass prairie biome remains.[7] States formerly with landcover in native tallgrass prairie such as Iowa, Illinois, Minnesota, Wisconsin, Nebraska, and Missouri have become valued for their highly productive soils and are included in the Corn Belt. As an example of this land use intensity, Illinois and Iowa for the United States, rank 49th and 50th out of 50 states in total uncultivated land remaining.

Research, by David Tilman, ecologist at the University of Minnesota, suggests that "biofuels made from high-diversity mixtures of prairie plants can reduce global warming by removing carbon dioxide from the atmosphere. Even when grown on infertile soils, they can provide a substantial portion of global energy needs, and leave fertile land for food production."[8] Unlike corn and soybeans which are major food crops, prairie grasses are not used for human consumption. Prairie grasses can be grown in infertile soil, eliminating the cost of adding nutrients to the soil. Tilman and his colleagues estimate that prairie grass biofuels would yield 51 percent more energy per acre than ethanol from corn grown on fertile land.[8] Some plants commonly used are lupine, big bluestem (turkey foot), blazing star, switchgrass, and prairie clover.

Only 1% of tallgrass prairie remains in the U.S. today.[9]

Significant preserved areas of prairie include:

A prairie garden is a garden primarily consisting of plants from a prairie.