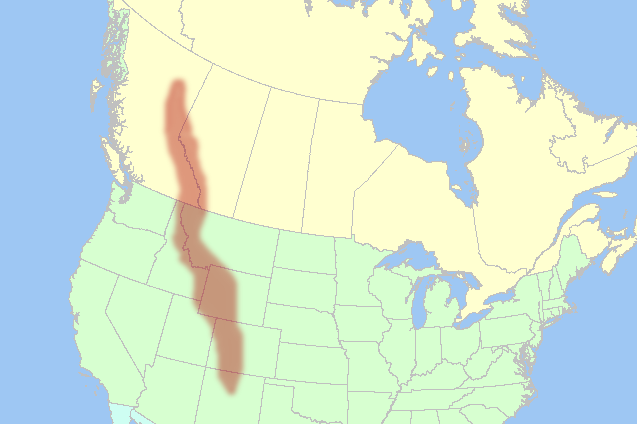 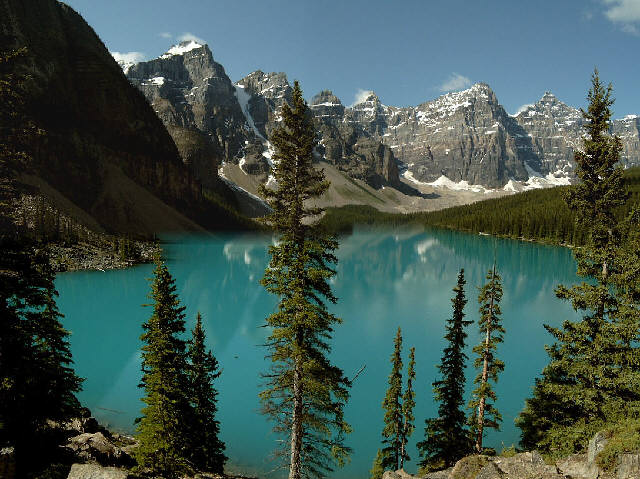 The Rocky Mountains, often called the Rockies, are a in western . The Rocky Mountains stretch more than 4,800 kilometers (3,000 s) from northernmost , in , to , in the . The range's highest peak is in at 14,440 feet (4,401 meters) above . Though part of North America's , the Rockies are distinct from the which are located immediately adjacent to the Pacific coast.

The Eastern edge of the rockies rises impressively above the of central North America, including the which runs from northern to northern , the and of , the and the of , and the Clark Range of . In Canada geographers define three main groups of ranges - the , and (the latter two flank the , the only river to pierce the Rockies, and are collectively referred to as the Northern Rockies). in , at 3,954 meters (12,972 ft), is the highest peak in the .

The Rocky Mountains are commonly defined as stretching from the in British Columbia south to the in New Mexico. Other mountain ranges continue beyond those two rivers, including the Selwyn Range in , the in , and the in , but those are not part of the Rockies, though they are part of the . The United States definition of the Rockies, however, includes the Cabinet and of Idaho and Montana, whereas their counterparts north of the , the , are considered a separate system in Canada, lying to the west of the huge , which runs the length of British Columbia from its beginnings in the middle valley in western Montana to the south bank of the . The Rockies vary in width from 70 to 300 miles (110 to 480 kilometers). Also west of the Rocky Mountain Trench, farther north and facing the across the Trench, are the and of the system of British Columbia.

The younger ranges of the Rocky Mountains uplifted during the late period (100 million-65 million years ago), although some portions of the southern mountains date from uplifts during the (3,980 million-600 million years ago). The mountains' geology is a complex of igneous and ; younger occurs along the margins of the southern Rocky Mountains, and volcanic rock from the (65 million-1.8 million years ago) occurs in the and in other areas. Millennia of severe erosion in the transformed intermountain basins into a relatively flat terrain. The and other north-central ranges contain folded and faulted rocks of and age draped above cores of and igneous and metamorphic rocks ranging in age from 1.2 billion (e.g., Tetons) to more than 3.3 billion years ().

Water in its many forms sculpted the present Rocky Mountain landscape. Runoff and snowmelt from the peaks feed Rocky Mountain rivers and lakes with the water supply for one-quarter of the United States. The rivers that flow from the Rocky Mountains eventually drain into three of the world's : the , the , and the . These rivers include:;Gulf of Mexico drainage
*
*
*
*
* Wind River
* ;Arctic Ocean drainage
*
* Peace River
**
***
*
*
**
**
***
** ;Northwest Pacific Ocean drainage
*
**
**
**
**
**
**
*** Elk River
*** ]
*** Vermilion River
**
** Clearwater River
**
** Salmon River
**
**
**
**
*
** ;Gulf of California drainage
* Colorado River
* Green River;Hudson Bay drainage
*
*
*
*
* The is located in the Rocky Mountains and designates the line at which waters flow either to the or Oceans. (8,020 feet / 2,444 m) in is so named due to the fact that water which falls on the mountain reaches not only the Atlantic and Pacific, but as well. Farther north in Alberta, the Athabasca and other rivers feed the basin of the , which has its outlet on the of the .

Since the last great Ice Age, the Rocky Mountains were home first to and then to the indigenous peoples of the , , Bannock, , , , Flathead, Shoshoni, Sioux, Ute, (Ktunaxa in Canada), , , and others.

Recent human history of the Rocky Mountains is one of more rapid change. The Spanish explorer — with a group of soldiers, missionaries, and African slaves — marched into the Rocky Mountain region from the south in 1540. The introduction of the horse, metal tools, rifles, new diseases, and different cultures profoundly changed the Native American cultures. Native American populations were extirpated from most of their historical ranges by disease, warfare, habitat loss (eradication of the bison), and continued assaults on their culture.

In 1739, French rs Pierre and Paul Mallet, while journeying through the , discovered a range of mountains at the headwaters of the , which local American Indian tribes called the "Rockies", becoming the first Europeans to report on this uncharted mountain range. [ [http://www.pbs.org/weta/thewest/events/1650_1800.htm PBS - THE WEST - Events from 1650 to 1800 ] ]

Sir Alexander MacKenzie (1764 - March 11, 1820) became the first European to cross the Rocky Mountains in 1793. He found the upper reaches of the Fraser River and reached what is now the Pacific coast of Canada on July 20 of that year, completing the first recorded transcontinental crossing of North America north of Mexico. He arrived at Bella Coola, British Columbia, where he first reached saltwater at South Bentinck Arm, an inlet of the Pacific Ocean.

The (1804-1806) was the first scientific reconnaissance of the Rocky Mountains. Specimens were collected for contemporary botanists, zoologists, and geologists. The expedition was said to have paved the way to (and through) the Rocky Mountains for European-Americans from the East, although Lewis and Clark met at least 11 European-American mountain men during their travels.

Mountain men, primarily French, Spanish, and British, roamed the Rocky Mountains from 1720 to 1800 seeking mineral deposits and furs. The fur-trading established as a trading post in what is now the Rocky Mountain foothills of Alberta in 1799, and their business rivals the established Acton House nearby. These posts served as bases for most European activity in the Canadian Rockies in the early 1800s, most notably the expeditions of , the fourth European to follow the Columbia River to the Pacific Ocean. After 1802, American s and explorers ushered in the first widespread caucasian presence in the Rockies south of the 49th parallel. The more famous of these include Americans included , , , , , Andrew Henry, and . On July 24, 1832, led the first across the Rocky Mountains by using 's South Pass. Thousands passed through the Rocky Mountains on the beginning in 1842. The s began to settle near the in 1847. From 1859 to 1864, was discovered in , , , and sparking several es bringing thousands of prospectors and miners to explore every mountain and canyon and to create the Rocky Mountain's first major industry. The Idaho gold rush alone produced more gold than the California and Alaska gold rushes combined and was important in the financing of the during the . The was completed in 1869, and was established as the world's first national park in 1872. While settlers filled the valleys and mining towns, conservation and preservation ethics began to take hold. President Harrison established several forest reserves in the Rocky Mountains in 1891-1892. In 1905, President Theodore Roosevelt extended the to include the area now managed as . Economic development began to center on , , , and , as well as on the service industries that support them. Tents and camps became ranches and farms, forts and train stations became towns, and some towns became cities.

Economic resources of the Rocky Mountains are varied and abundant. s found in the Rocky Mountains include significant deposits of , , , , , , and . The Wyoming Basin and several smaller areas contain significant reserves of , , , and . For example, the Climax mine, located near , was the largest producer of in the world. Molybdenum is used in heat-resistant steel in such things as cars and planes. The Climax mine employed over 3,000 workers. The Coeur d’Alene mine of northern Idaho produces silver, lead, and zinc. Canada's largest mines are near and ; additional coal mines exist near and in the Northern Rockies surrounding .Abandoned mines with their wakes of mine tailings and toxic wastes dot the Rocky Mountain landscape. In one major example, eighty years of zinc mining profoundly polluted the river and bank near Eagle River in north-central Colorado. High concentrations of the metal carried by spring runoff harmed , , and populations. An economic analysis of mining effects at this site revealed declining property values, degraded water quality, and the loss of recreational opportunities. The analysis also revealed that cleanup of the river could yield $2.3 million in additional revenue from recreation. In 1983, the former owner of the zinc mine was sued by the Colorado Attorney General for the $4.8 million cleanup costs; 5 years later, ecological recovery was considerable.

Agriculture and forestry are major industries. Agriculture includes dryland and irrigated farming and grazing. Livestock are frequently moved between high-elevation summer s and low-elevation winter pastures, a practice known as .

Human population is not very dense in the Rocky Mountains, with an average of four people per square kilometer (10 per square mile) and few cities with over 50,000 people. However, the human population grew rapidly in the Rocky Mountain states between 1950 and 1990. The 40-year statewide increases in population range from 35% in Montana to about 150% in Utah and Colorado. The populations of several mountain towns and communities have doubled in the last 40 years. , increased 260%, from 1,244 to 4,472 residents, in 40 years.

People from all over the world visit the sites to hike, camp, or engage in mountain sports. In the summer, mainFact|date=September 2008 tourist attractions are:

In Canada, the mountain range contains these national parks:
*
*
*
*
*

In the winter, is the main attraction. A list of the major ski resorts can be found at List of U.S. Rocky Mountain ski resorts.

The adjacent in British Columbia contain major resorts such, Fernie, Panorama and Kicking Horse, as well as .

The Rocky Mountains have a highland climate. The average annual temperature in the valley bottoms of the Colorado Rockies near the latitude of Boulder is 43 °F (6 °C). July is the hottest month there with an average temperature of 82 °F (28 °C). In January, the average monthly temperature is 7 °F (−14 °C), making it the region's coldest month. The average precipitation per year there is approximately 14 inches (360 mm).