The city of Coeur d'Alene has grown significantly in recent years, in part because of a substantial increase in tourism, encouraged by several resorts in the area. Barbara Walters called the city "a little slice of Heaven" and included it in her list of most fascinating places to visit. On November 28, 2007, Good Morning America broadcast the city's Christmas lighting ceremony because its display is among the largest in the United States. Coeur d'Alene is also located near two major ski resorts, with Silver Mountain Resort to the east in Kellogg, and Schweitzer Mountain Ski Resort to the north in Sandpoint.

The city is named after the Coeur d'Alene People, a tribe of Native Americans who lived along the rivers and lakes of the region when discovered by French Canadian fur traders in the late 18th and early 19th century. The name Coeur d'Alene translated into English means Heart of an Awl.

Coeur d'Alene sits on the western edge of the Coeur d'Alene National Forest. The city is surrounded by forest, which contains several lakes and campgrounds.

Hispanic or of any race were 2.70% of the population.

In the city the population was spread out with: 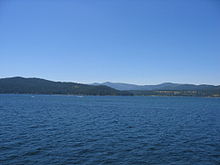 French Canadian fur traders allegedly named the local Indian tribe the Coeur d'Alene out of respect for their tough trading practices.[citation needed] Translated from French Cœur d'Alêne literally means "heart of the awl" which might mean "sharp-hearted" or "shrewd." Others interpret "Heart of the Awl" to translate to "Eye of the Needle", perhaps referring to the narrow passage through which the lake empties into the Spokane River on its way to the Columbia.

The area was extensively explored by David Thompson of the North West Company starting in 1807. The Oregon boundary dispute (or Oregon question) arose as a result of competing British and American claims to the Pacific Northwest of North America in the first half of the 19th century.

The Oregon Treaty ended disputed joint occupation of the area when Britain ceded all rights to land south of the 49th parallel in 1846. When General William T. Sherman ordered a fort constructed on the lake in the 1870s, he gave it the name Fort Coeur d'Alene; hence the name of the city that grew around it. The name of the fort was later changed to Fort Sherman to honor the general.[10] North Idaho College, a junior college, now occupies the site.

In the 1890s, the Coeur d'Alene district experienced two significant miners' uprisings.[11] In 1892, the union's discovery of a labor spy in their midst, in the person of sometime cowboy and Pinkerton agent Charlie Siringo, resulted in a shooting war between miners and the company. Years later Harry Orchard, who owned a share of the Hercules Mine in the nearby mountains before it began producing, and who later confessed to dynamiting a $250,000 mill belonging to the Bunker Hill Mining Company near Wardner during another miners' uprising in 1899, would also confess to a secret, brutal and little understood role in the Colorado Labor Wars before returning to Idaho to assassinate former Idaho Governor Frank Steunenberg.[12]

The city is the healthcare, educational, media, manufacturing, retail and recreation center for northern Idaho. Several mining firms are headquartered in the city, among them Coeur (NYSE: CDE) and Hecla Mining Company (NYSE: HL). The Coeur d'Alene resort is a major employer. The U.S. headquarters of The Pita Pit is located in Coeur d'Alene.[13] 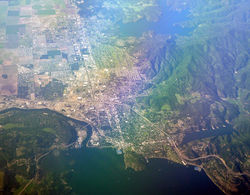 Kootenai Health is the primary medical center serving the Coeur d'Alene and north Idaho area. With over 1700 employees, is also the largest employer in Kootenai County.

The Coeur d'Alene School District 271 serves 10,300 students with its two high schools, three middle schools, an alternative high/middle school, a dropout retrieval school and 10 elementary schools. The district has a staff of 550 teachers, 47 administrators and 552 support personnel to provide education for the Coeur d'Alene, Hayden and Dalton communities.[citation needed]

A partnership with the City of Coeur d'Alene Police Department provides five School Resource Officers. Through an alliance with Kootenai Medical Center, the District is served by seven school nurses.

Coeur d'Alene also has a Charter school. Its teaching curriculum focus heavily on setting higher college-preparatory standards then many other schools, with a strong emphasis on teaching the Latin language. The school also enforces a strict dress code policy on all enrolled students to maintain a professional academic atmosphere. Coeur d'Alene Charter Academy is a regular middle–high school publicly funded with open admission to any students residing in the state of Idaho, not just those restricted to a particular district of the county. However, public transportation is not provided to the school. The Coeur d'Alene Charter Academy is currently undergoing expanding into neighboring lots for the purpose of adding additional classrooms.[citation needed]

Coeur d'Alene is accessed from Interstate 90 at Exits 11 through 15. The greater Coeur d'Alene area is almost entirely dependent upon private automobiles for transportation. Combined with the city's rapid growth since 1990, relative congestion now occurs on a significant portion of the area highways, notably U.S. 95 between Northwest Blvd. north to Hayden, and on several under-developed arterial streets such as Atlas, Ramsey, and Government Way. Before the construction of I-90, the city was served by U.S. Route 10, which runs through downtown. This route is Northwest Boulevard and Sherman Avenue. The former US 10, between I-90 exits 11 and 15, is now designated as Interstate 90 Business.

Free public bus service is available to area residents. Called Citylink Transit all buses are wheelchair accessible, and can transport up to four bicycles. The buses operating in the urbanized area of Kootenai County leave the Riverstone Transfer Station every eighty five minutes, seven days a week, including holidays. The bus system comprises five separate routes.

The closest major airport serving Coeur d'Alene and North Idaho is the Spokane International Airport which is served by nine airlines and is located 40 miles (64 km) to the west in Spokane, Washington. Coeur d'Alene also has Coeur d'Alene Airport – Pappy Boyington Field (KCOE), which is a general aviation airport located in Hayden, north of the city near U.S. 95. 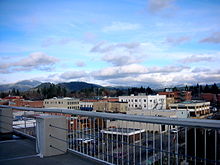 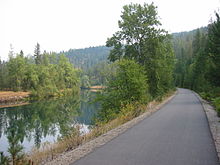 Coeur d'Alene has one sister city: