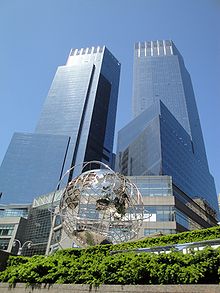 Time Warner Center, the headquarters of the company. It is shared by it's namesake, but unrelated company, Time Warner.

Time Warner Cable was formed in 1989 through the merger of Time Inc.'s cable television company, American Television and Communications Corp., and Warner Cable, a division of Warner Communications. It also includes the remnants of the defunct QUBE interactive TV service. In 1995, the company launched the Southern Tier On-Line Community, a cable modem service now known as Road Runner High Speed Online. That same year, talks began that would later result in Warner's acquisition of Paragon Cable.

In April 2008, the Charlotte Bobcats reached a naming rights deal with Time Warner Cable, the Charlotte area's only cable television provider. Under this deal, Bobcats Arena will be renamed Time Warner Cable Arena. In return, Time Warner agreed to tear up the cable television deal that had limited the Bobcats' exposure over the team's first four years. Starting with the 2008–09 season, most Bobcats games will be seen on FSN South and SportSouth in North and South Carolina.[6]

On March 9, 2007, Time Warner Cable, which provides service to the local area, northeastern Wisconsin, signed a 10-year naming rights deal. The field is home of the Wisconsin Timber Rattlers, a local minor league baseball team of the Midwest League, based in Grand Chute, Wisconsin.

In addition to Adelphia's coverage being divided up, Time Warner Cable and Comcast also agreed to exchange some of their own subscribers in order to consolidate key regions. An example of this is the Los Angeles market, which was mostly covered by Comcast and Adelphia (and some areas of the region already served by TWC), is now under Time Warner Cable. Philadelphia, previously was split between Time Warner and Comcast, with the majority of cable subscribers belonging to Comcast. Time Warner subscribers in Philadelphia were swapped with Comcast in early 2007. Similarly, the Houston area, which was under Time Warner, was swapped to Comcast, while the Dallas metro area was changed to Time Warner (RR).[9] In the Twin Cities, Minneapolis was Time Warner and Saint Paul was Comcast. That whole market is now Comcast. There have also been rumors of a Charter purchase as well, much like how Adelphia was acquired in conjunction with Comcast.

On August 13, 2011, Time Warner Cable announced its purchase of Insight Communications for $3 billion acquiring Insight's 700,000 subscribers nationwide. The sale is subject to approval by the Federal Communications Commission and Insight franchisees.[11]

The value of this deal is that it allows Advance/Newhouse to more directly control their cable investments without having to completely unravel the TWEAN partnership, which does bring some benefits via Time Warner's development and purchasing clout.

In late 2005, TWC and several other cable companies formed a venture with Sprint Nextel. This joint venture enables TWC customers to receive a full suite of products, linking in-home and out-of-home entertainment, information, and communications services. All of this was included in the new "Triple Play On The Go", similar to the Triple Play[discuss] but an addition of new services through Sprint Nextel.

On March 16, 2010, Time Warner Cable's transmission of their Kids on Demand and Kids Pre-School on Demand channels on systems in eastern North Carolina was interrupted by programming from the adult pay television channel Playboy TV for approximately two hours between 6:15 a.m. and 8:15 a.m./EDT, in which a group of nude women talked and posed in a sexually suggestive manner.[45] This accidental display affected Time Warner's digital cable subscribers in four towns in the system's eastern North Carolina cluster, while other areas displayed a black screen. A Time Warner spokesperson said in a statement to Raleigh CBS affiliate WRAL,”It was a technical malfunction that caused the wrong previews to be shown on our kids’ on-demand channels. Unfortunately it hit at the worst possible time on the worst possible channels.” A Time Warner executive said normal monitoring procedures did not take effect because the glitch affected only a few areas.[46]

2008 The company was honored at the 2008 Technology & Engineering Emmy Awards for development of interactive video-on-demand infrastructure and signaling, leading to large scale VOD implementations.

2009 The company was honored by Institutional Investor as America's Best Investor Relations for sell side in the Media sector for Cable & Satellite in 2009.

The company was ranked in second place by Institutional Investor as America's Best Investor Relations for sell side in the Media sector for Cable & Satellite.

Best Investor Relations - First Place - Nominated by the Buy Side

Best Investor Relations - Second Place - Nominated by the Sell Side

Best CEO - Glenn Britt - Nominated by the Sell Side*

Best CFO - Robert Marcus - Nominated by the Buy Side*

Business Insider's list of most hated companies in America - Third Place, after Pepco and Delta Airlines