Infobox Settlement
official_name = City of Fort Wayne
settlement_type =
nickname = The Summit City, The City That Saved Itself, The Fort 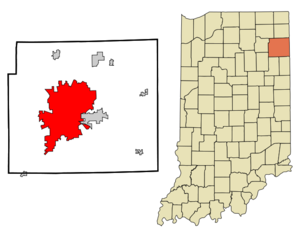 The city sits within a convert|250|mi|km|sing=on radius of 17 percent of the total United States population, within a day's drive of half of the nation's population, [ [http://www.ft-wayne.in.us/home/facts.html Fort Wayne Facts] . Retrieved -.] and nearly equidistant from the economical centers of Chicago, Cincinnati, Columbus, Detroit, and Indianapolis, [ [http://www.cityoffortwayne.org/index.php?option=com_content&task=view&id=468&Itemid=620 Fort Wayne Facts - City of Fort Wayne] . Retrieved on -.] greatly influencing Fort Wayne's local economy, primarily based on manufacturing, insurance, and healthcare. [ [http://www.city-data.com/us-cities/The-Midwest/Fort-Wayne-Economy.html Fort Wayne: Economy - City-Data] . Retrieved on -.] The metro area is also a contributor to the nation's agricultural sector. The city has been presented with the in 1982-1983 and 1998. [ [http://www.ncl.org/aac/past_winners/past_winners_state.html National Civic League Past Winners] . Retrieved -.]

general and statesman General "Mad" Anthony Wayne is the namesake of Fort Wayne. [cite web | url=http://www.cityoffortwayne.org/index.php?Itemid=247&id=99&option=com_content&task=view | title=Fort Wayne History | publisher=City of Fort Wayne | accessdate=2008-09-05] The United States Army built Fort Wayne last in a series of forts near the community of , the largest of the Miami villages, which was located where the St. Joseph River and St. Marys River converge to form the . [Brice, Wallace A. (1868) "History of Fort Wayne, from the Earliest Known Accounts of this Point to the Present Period". "D.W. Jones & son".]

The Miami nation first established a settlement at the Maumee, St. Joseph, and St. Marys Rivers in the mid-17th century called . The village was the traditional capital of the Miami nation and related tribes. Historians believe that around 1676, French priests and missionaries visited the Miami on their way back from a mission at . In 1680, sent a letter to the stating he had also stopped there. In the 1680s, French traders established a post at the location because it was the crucial between the Great Lakes and the . The Maumee River is approximately ten miles (16 kilometers) away from the Little River branch of the , which flows, in turn, into the . [Goodrich, De Witt C. and Charles Richard Tuttle (1875) An Illustrated History of the State of Indiana. (NP:R. S. Peale & Co., ND).]

In 1696, appointed The Miami regained control of Kekionga, a rule that lasted for more than thirty years.

In 1790, President ordered the United States Army to secure Indiana. Three battles were fought in Kekionga against and the . Miami warriors annihilated the United States Army in the first two battles. Anthony Wayne led a third expedition, destroying the village while its warriors were away. When the tribe returned to their destroyed village, decided to negotiate peace. After General Wayne refused it, the tribe was advanced to where they were defeated on , . On , , the United States army captured the Wabash-Erie portage from the Miami Confederacy and built a new fort at the three rivers, Fort Wayne, in honor of General Wayne. [Hoxie, Frederick E. (1996) "Encyclopedia of North American Indians: Native American History, Culture, and Life from Paleo-Indians to the Present". "Houghton Mifflin Company". p.343 ISBN 0-395-66921-9.]

Fort Wayne prospered under the construction of the , earning Fort Wayne's nickname, The Summit City, due to the city's placing at the zenith of the locks on the canal. Fort Wayne lost national prominence in the demise of the Wabash and Erie Canal as the system quickly took its place. On , , the Town of Fort Wayne incorporated as the City of Fort Wayne. [ [http://www.answers.com/topic/fort-wayne-history?cat=travel Fort Wayne: History: County Seat Becomes Industrial Center] . Retrieved on -.] Population growth occurred most in the 19th century with the arrival of German, Polish, and Irish immigrants, bringing large numbers of and .

In recent history, the focus of citizens has been the concern of bolstering business and beautification in the core of Fort Wayne. Within the last decade, the city has improved in this venture, with the renovations and expansions of the Main Library Branch and . In 2006, it was announced that plans for a new $125 million development, [Lanka, Benjamin "", , . Retrieved on -.] containing a new baseball stadium, parking garage, condominiums, shops, and Courtyard by Marriott Hotel were to be built in downtown Fort Wayne between 2008 and 2010. This project has come to be known as the project. [Leininger, Kevin, [http://www.news-sentinel.com/apps/pbcs.dll/article?AID=/20080101/NEWS/801010314 Harrison Square] , "", , . Retrieved on -.] [ [http://www.downtownfortwayne.com/story.php?cat=1&sub=&uid=135 Harrison Square] . Retrieved on -.] [ [http://jordan.fortwayne.com/jgweb/specials/multimedia/Harrison-Square/Harrison-Square.html Harrison Square] . Retrieved on -.]

Fort Wayne is located at coor dms|41|04|50|N|85|08|21|W|city (41.07253, -85.13937). [ [http://tiger.census.gov/cgi-bin/mapsurfer?infact=2&outfact=2&act=move&on=CITIES&on=GRID&on=cen_blkg&on=censusb&on=con_dist&on=counties&on=indian&on=majroads&on=miscell&on=msa&on=places&on=railroad&on=shorelin&on=streets&on=tracts&on=interstate&on=statehwy&on=states&on=street_names&on=ushwy&on=water&on=zip_code&tlevel=-&tvar=-&tmeth=i&mlat=41.07375&mlon=-85.13902&msym=redpin&mlabel=Fort_Wayne__IN&murl=&lat=41.07253&lon=-85.13937&wid=0.031&ht=0.031&conf=mapnew.con US Gazetteer files: 2000 and 1990] . (-). Retrieved on -.] For a regional summit, Fort Wayne lies on fairly flat land, with the exception of few hills and depressions throughout the region. and are prevalent in portions of southwest Fort Wayne and Allen County, as well as some quarries. West of the city lies the Tipton Till Plain while land east of the plain is the former . The St. Marys River cuts through the southeast section of Allen County, flowing northward, while the St. Joseph River cuts through the northeast section of the county, flowing southward. Both rivers converge roughly in the center of the county to form the Maumee River, which flows northeastward, eventually emptying into .

Fort Wayne, like most of the , has a . Summers are hot and humid, and winters are generally cold with frequent snowfall. Precipitation is fairly evenly distributed throughout the year. Severe weather is not uncommon, with rarely occurring, particularly in the spring and summer months, though are observed more frequently. [ [http://www.crh.noaa.gov/iwx/CLI/FWA/history/climatedescription.php Fort Wayne, Indiana Climate - Tornadoes - NWS Northern Indiana] . Retrieved on .] The most severe tornado, an F2 on the , struck portions of northern Fort Wayne on , , causing extensive damage to Northcrest Shopping Center and other businesses along the Coliseum Boulevard corridor, moving on to a subdivision, but resulting in only three minor injuries. [ [http://www.crh.noaa.gov/iwx/program_areas/events/2001/05_26_01_fwator/index.php NOAA - A Summary of the May 26, 2001 Tornado Event Over Northern Indiana and Extreme Northwest Ohio] . Retrieved on -.]

The reports the highest recorded temperature in the city at convert|106|°F|°C|abbr=on on , , and , , and the lowest recorded temperature at convert|-24|°F|°C|abbr=on on , . [ [http://www.crh.noaa.gov/iwx/CLI/FWA/history/climatedescription.php Fort Wayne, Indiana Climate - Heat / Cold - NWS Northern Indiana] . Retrieved on -.] The wettest month on record was July 1986, with convert|11.00|in|mm of precipitation recorded. The greatest 24-hour rainfall was convert|4.93|in|mm on , . The average annual precipitation ranges from convert|36.55|in|mm at the airport to convert|37.90|in|mm at the Fort Wayne Water Pollution Control Plant. During the winter season, snowfall accumulation averages convert|32.4|in|mm per year. snow is not rare to the region, but usually appears in the form of light snow flurries. The snowiest month on record was convert|29.5|in|mm in January 1982 (the 1981-1982 winter season was also the snowiest season on record, with convert|81.2|in|mm reported). The greatest 24-hour snowfall was convert|12.6|in|mm on , . [ [http://www.crh.noaa.gov/iwx/CLI/FWA/history/climatedescription.php Fort Wayne, Indiana Climate - Winter Weather - NWS Northern Indiana] . Retrieved on -.]

The major newspaper in the city is the independent "", a daily that has more than twice the circulation of the city's second daily, the -winning "". The two dailies have separate editorial departments, but under a , printing, advertising, and circulation are handled by Fort Wayne Newspapers, Inc. The city is also served by several free weekly and monthly alternative and neighborhood newspapers, including "", "", "Frost Illustrated", "Ink", "The Macedonian Tribune" (the oldest and largest publication produced outside of the [ [http://www.macedonian.org/tribune/ About the "Macedonian Tribune"] . Retrieved on -.] ), "", "Whatzup Magazine", and "The Waynedale News".

The Fort Wayne radio market is the 105th-largest in the nation. Beginning broadcasting in 1925, Fort Wayne's second radio station, , is now an independent news/talk radio station, featuring local and network news talkshows. Two stations, and , are based in the city. Fort Wayne is served by a handful of as the 106th-largest in the nation. Broadcast network affiliates include (), (FOX), (NBC), (ABC), and (). Religious broadcasters include and . and also are cable-only for many Fort Wayne market viewers as they are broadcast by digital sub-channels of WPTA-TV and WISE-TV, respectively, and not broadcast on an channel.

In recent decades, Fort Wayne has developed new paths and paved walking trails along the riverbanks, known as the Rivergreenway Trail System, not only to beautify the riverfronts, but to also promote healthier living habits for residents around the community. The Rivergreenway Trail System currently encompasses around convert|20|mi|km throughout Allen County. [ [http://www.fortwayneparks.org/index.php?option=com_content&task=view&id=24&Itemid=52 Fort Wayne Parks & Recreation - Rivergreenway] , Fort Wayne Parks and Recreation. Retrieved on -.]

It was announced November 2007, that the (INDOT) had awarded the City of Fort Wayne nearly $1 million to aid in construction that will soon begin on a new extension of the Rivergreenway, called the Pufferbelly Trail, that will eventually link the Fort Wayne Children's Zoo in Franke Park and the northern suburbs of Fort Wayne with the rest of the trail system. The final plan includes joining near in the north, and in the south near . [cite web | title=Area nature trails get $3.3 million | publisher= "Fort Wayne Journal Gazette" | url=http://www.journalgazette.net/apps/pbcs.dll/article?AID=/20071113/LOCAL/71113007 | accessdate=2007-11-15]

In the spring of 2008, ABC affiliate WPTA-TV received $10,000 in seed money from the "" which was then received by Aboite New Trails, Fort Wayne Trails, Greenway Consortium, and Northwest Allen Trails, four organizations in Fort Wayne. The donations topped $1 million , at a community celebration named "Oprah's Big Give: Fort Wayne Trails" in Headwaters Park with Coach and players in attendance. [cite web | title=Big Give: Trails top $1 million | publisher= "Fort Wayne Journal Gazette" | url=http://www.journalgazette.net/apps/pbcs.dll/article?AID=/20071113/LOCAL/71113007 | accessdate=2008-04-12] On , , Fort Wayne was featured on a segment of "" in recognition for raising the most money of the ninety participating cities in the country. The final total rounded-out to $1.2 million. [ [http://www.oprah.com/about/oprahsbiggive/viewers/tows_112.jhtml Big Give in Fort Wayne, Indiana] , "The Oprah Winfrey Show". Retrieved -.]