In economics, factors of production means inputs and finished goods means output. Input determines the quantity of output i.e. output depends upon input. Input is the starting point and output is the end point of production process and such input-output relationship is called a production function. All factors of production like land, labour, capital and entrepreneur are required in combination at a time to produce a commodity. In economics, production means creation or an addition of utility.factors of production (or productive inputs or resources) are any commodities or services used to produce goods and services. 'Factors of production' may also refer specifically to the primary factors, which are stocks including land, labor (the ability to work), and capital goods applied to production. The primary factors facilitate production but neither become part of the product (as with raw materials) nor become significantly transformed by the production process (as with fuel used to power machinery). 'Land' includes not only the site of production but natural resources above or below the soil. Recent usage has distinguished human capital (the stock of knowledge in the labor force) from labor.[1] Entrepreneurship is also sometimes considered a factor of production.[2] Sometimes the overall state of technology is described as a factor of production.[3] The number and definition of factors varies, depending on theoretical purpose, empirical emphasis, or school of economics.[4]

In the interpretation of the currently dominant view of classical economic theory developed by neoclassical economists, the term "factors" did not exist until after the classical period and is not to be found in any of the literature of that time.[5] Differences are most stark when it comes to deciding which factor is the most important. For example, in the Austrian view—often shared by neoclassical and other "free market" economists—the primary factor of production is the time of the entrepreneur, which, when combined with other factors, determines the amount of output of a particular good or service. However, other authors argue that "entrepreneurship" is nothing but a specific kind of labor or human capital and should not be treated separately. The Marxian school goes further, seeing labor (in general, including entrepreneurship) as the primary factor of production, since it is required to produce capital goods and to utilize the gifts of nature. But this debate is more about basic economic theory (the role of the factors in the economy) than it is about the definition of the factors of production.

In French Physiocracy, the main European school of economics before Adam Smith, the productive process is explained as the interaction between participating classes of the population. These classes are therefore the factors of production within physiocracy: capital, entrepreneurship, land, and labor. 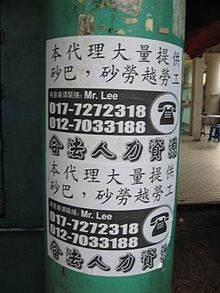 An advertisement for labour from Sabah and Sarawak, seen in Jalan Petaling, Kuala Lumpur.

The classical economics of Adam Smith, David Ricardo, and their followers focuses on physical resources in defining its factors of production, and discusses the distribution of cost and value among these factors. Adam Smith and David Ricardo referred to the "component parts of price"[6] as the costs of using:

The classical economists also employed the word "capital" in reference to money. Money, however, was not considered to be a factor of production in the sense of capital stock since it is not used to directly produce any good. The return to loaned money or to loaned stock was styled as interest while the return to the actual proprietor of capital stock (tools, etc.) was styled as profit. See also returns.

Marx considered the "elementary factors of the labor-process" or "productive forces" to be:

The "subject of labor" refers to natural resources and raw materials, including land. The "instruments of labor" are tools, in the broadest sense. They include factory buildings, infrastructure, and other human-made objects that facilitate labor's production of goods and services.

This view seems similar to the classical perspective described above. But unlike the classical school and many economists today, Marx made a clear distinction between labor actually done and an individual's "labor power" or ability to work. Labor done is often referred to nowadays as "effort" or "labor services." Labor-power might be seen as a stock which can produce a flow of labor.

Labor, not labor power, is the key factor of production for Marx and the basis for Marx's labor theory of value. The hiring of labor power only results in the production of goods or services ("use-values") when organized and regulated (often by the "management"). How much labor is actually done depends on the importance of conflict or tensions within the labor process.

Further distinctions from classical and neoclassical microeconomics include the following:

As mentioned, recent authors have added to the classical list. For example, J.B. Clark saw the co-ordinating function in production and distribution as being served by entrepreneurs; Frank Knight introduced managers who co-ordinate using their own money (financial capital) and the financial capital of others. In contrast, many economists today consider "human capital" (skills and education) as the fourth factor of production, with entrepreneurship as a form of human capital. Yet others refer to intellectual capital. More recently, many have begun to see "social capital" as a factor, as contributing to production of goods and services.

The word has been used in other ways. The sociologist C. Wright Mills refers to "new entrepreneurs" who work within and between corporate and government bureaucracies in new and different ways.[9] Others (such as those practicing public choice theory) refer to "political entrepreneurs," i.e., politicians and other actors.

Much controversy rages about the benefits produced by entrepreneurship. But the real issue is about how well institutions they operate in (markets, planning, bureaucracies, government) serve the public. This concerns such issues as the relative importance of market failure and government failure.

Contemporary analysis distinguishes tangible, physical, or nonhuman capital goods from other forms of capital such as human capital. Human capital is embodied in a human being and is acquired through education and training, whether formal or on the job.

Human capital is important in modern economic theory. Education is a key element in explaining economic growth over time (see growth accounting). It is also often seen as the solution to the "Leontief paradox" in international trade.

This view posits a new Information Age, which changes the roles and nature of land, labour, and capital. During the Information Age (circa 1971–1991), the Knowledge Age (circa 1991 to 2002), and the Intangible Economy (2002–present) many see the primary factors of production as having become less concrete. These factors of production are now seen as knowledge, collaboration, process-engagement, and time quality.

According to economic theory, a "factor of production" is used to create value and allow economic performance. As the four "modern-day" factors are all essentially abstract, the current economic age has been called the Intangible Economy. Intangible factors of production are subject to network effects and the contrary economic laws such as the law of increasing returns.[10]

Social capital is often hard to define, but to one textbook it is:

the stock of trust, mutual understanding, shared values, and socially held knowledge that facilitates the social coordination of economic activity.[11]

Knowledge, ideas, and values, and human relationships are transmitted as part of the culture. This type of capital cannot be owned by individuals and is instead part of the common stock owned by humanity. But they are often crucial to maintaining a peaceful society in which normal economic transactions and production can occur.

Another kind of social capital can be owned individually.[12] This kind of individual asset involves reputation, what accountants call "goodwill", and/or what others call "street cred," along with fame, honor, and prestige. It fits with Pierre Bourdieu’s definition of "social capital" as:

an attribute of an individual in a social context. One can acquire social capital through purposeful actions and can transform social capital into conventional economic gains. The ability to do so, however, depends on the nature of the social obligations, connections, and networks, available to you.[13]

This means that the value of individual social assets that Bourdieu points to depend on the current "social capital" as defined above.

Ayres and Warr (2009) are among the economists who criticize orthodox economics for overlooking the role of natural resources and the effects of declining resource capital.[8] See also: Natural resource economics

Energy can be seen as individual factor of production, with an elasticity larger than labor.[14] A cointegration analysis support results derived from linear exponentional (LINEX) production functions.[15]