The Sugar Bowl hosts the Southeastern Conference (SEC) champion unless (under the current BCS alignment) the team is selected to play in the national championship game; in that case the Sugar Bowl can select a team at-large from any conference as the host team. The SEC champion has participated in every standalone BCS National Championship Game since 2006; the Sugar Bowl has used its replacement selection on an SEC at-large team. As such, an SEC team has played in the Sugar Bowl every year since the 2000–01 game.

Sugar Bowl in Tulane Stadium in the 1940s

In 1890, Pasadena, California held its first Tournament of Roses Parade to showcase the city's mild weather compared to the harsh winters in northern cities. As one of the organizers said: "In New York, people are buried in snow. Here, our flowers are blooming and our oranges are about to bear. Let's hold a festival to tell the world about our paradise." In 1902, the annual festival was enhanced by adding a football game.[4] 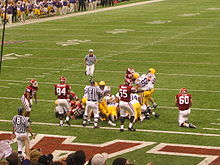 In 1926, leaders in Miami, Florida decided to do the same with a "Fiesta of the American Tropics" that was centered around a New Year's Day football game. Although a second "Fiesta" was never held, Miami leaders later revived the idea with the "Palm Festival" (with the slogan "Have a Green Christmas in Miami"). The football game and associated festivities of the Palm Festival were soon named the "Orange Bowl."[5]

In New Orleans, Louisiana, the idea of a New Year's Day football game was first presented in 1927 by Colonel James M. Thomson, publisher of the New Orleans Item, and Sports Editor Fred Digby. Every year thereafter, Digby repeated called for action, and even came up with the name "Sugar Bowl" for his proposed football game.[6]

By 1935, enough support had been garnered for the first Sugar Bowl. The game was played in Tulane Stadium, which had been built in 1926 on Tulane University's campus (before 1871, Tulane's campus was Paul Foucher's Plantation, where Foucher's father-in-law, Etienne de Bore, had first granulated sugar from cane syrup). Warren V. Miller, the first president of the New Orleans Mid-Winter Sports Association, guided the Sugar Bowl through its difficult formative years of 1934 and 1935.

Much controversy preceded the 1956 Sugar Bowl, where Bobby Grier's Pitt Panthers would meet the Georgia Tech Yellow Jackets. There was controversy over whether Grier should be allowed to play, and whether Georgia Tech should even play at all due to Georgia governor Marvin Griffin's opposition to integration.[7][8][9]

In November 1967, Army's success on the field made them a strong candidate to be selected for the 1968 Sugar Bowl. However, Pentagon officials, in the midst of the Vietnam War, refused to allow the team to play what would have been the academy's first bowl game ever--citing the "heavy demands on the players' time" as well as an emphasis on football "not consistent with the academy's basic mission: to produce career Army officers."[10] 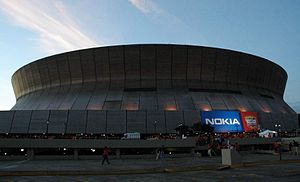 Superdome for the 2005 Sugar Bowl

Tulane Stadium hosted the game from 1935 through 1975. It has been played in the Louisiana Superdome since 1976. The Sugar Bowl's corporate title sponsor was USF&G Financial Services from 1987 to 1995 and Nokia cellular telephones of Finland from 1995 to 2006. In March 2006 Allstate Insurance was announced as the new title sponsor. ABC Sports televised the game from 1969 through 2006. Since 2007 Fox Sports has televised the game as a part of their contract with the BCS. ESPN will start airing the game with the 2010–11 season, after outbidding Fox for the broadcasting rights.[11]

The 2006 Sugar Bowl game was played at the Georgia Dome in Atlanta, Georgia because of the extensive damage the Superdome suffered as a result of Hurricane Katrina. The Sugar Bowl has since returned to the refurbished Superdome.

The Sugar Bowl maintains an archive of past programs, images, newsreels, and other materials. The archive, originally housed in the Superdome, survived Hurricane Katrina, but a more secure home was needed. During the summer of 2007, the Sugar Bowl donated its materials to The Historic New Orleans Collection, designating it the permanent home of its archive.

NOTE: Terrell Pryor, the winner of the 2011 award, was ruled ineligible and his entire record was vacated from the 2010 season.

As of the 2006–07 season, the BCS aired primarily on Fox while only the Rose Bowl was shown on ABC. Fox aired 4 BCS Bowl Games (Orange Bowl, Fiesta Bowl, Sugar Bowl and the BCS National Championship Game) through the 2009-2010 season. Starting with the 2010-2011 season, ESPN will air the games, out bidding Fox for the rights to the games.[11]

From 1999-2006, the game aired on ABC as part of its BCS package, where it had also been televised from 1969 through 1998. The Sugar Bowl was the only Bowl Alliance game to stick with ABC following the 1995, 1996 and 1997 seasons; the Fiesta and Orange Bowls were televised by CBS. Prior to that, NBC aired the game for several years.

The game is also broadcast nationally on ESPN Radio.