The Atlantic Coast Conference (ACC) is a collegiate athletic league in the United States. Founded in 1953 in Greensboro, North Carolina, the ACC sanctions competition in twenty-five sports in Division I of the National Collegiate Athletic Association for its twelve member universities. Football teams participate in the Division I Football Bowl Subdivision (FBS), the higher of two levels of Division I college football.

The ACC is considered one of the six "power conferences," and the ACC football champion receives an automatic bid to one of the Bowl Championship Series games each season.

Seven universities were charter members of the ACC: Clemson, Duke, Maryland, North Carolina, North Carolina State, South Carolina, and Wake Forest. Previously members of the Southern Conference, they left partially due to that league's ban on post-season play. After drafting a set of bylaws for the creation of a new league, the seven withdrew from the Southern Conference at the spring meeting on the morning of May 8, 1953. The bylaws were ratified on June 14, 1953, and the ACC was created. On December 4, 1953, officials convened in Greensboro, North Carolina, and admitted Virginia into the conference.[2]

The ACC added three members from the Big East Conference during the 2005 cycle of conference realignment: Miami and Virginia Tech joined on July 1, 2004, and Boston College joined on July 1, 2005, as the league's twelfth member and the first and only one from New England. The expansion was not without controversy, since Connecticut, Rutgers, Pittsburgh, and West Virginia (and, initially, Virginia Tech) filed lawsuits against the ACC, Miami, and Boston College for conspiring to weaken the Big East Conference.

The ACC Hall of Champions opened on March 2, 2011, next to the Greensboro Coliseum arena, making the ACC the second college sports conference to have a hall of fame.[3][4]

On September 17, 2011, Big East Conference members Syracuse University and the University of Pittsburgh both tendered a formal written application to the ACC to join its ranks.[5] The two schools were accepted into the conference the following day.[6] Because the Big East intends to hold Pitt and Syracuse to the 27-month notice period required by league bylaws, the most likely entry date into the ACC (barring negotiations) is July 1, 2014.[7]

Outside of the ACC, Boston College plays ice hockey as a member of Hockey East; and Maryland, North Carolina, and NC State are members of the East Atlantic Gymnastics League for women's gymnastics.

† The count of College World Series appearances includes those made by the school prior to joining the ACC: 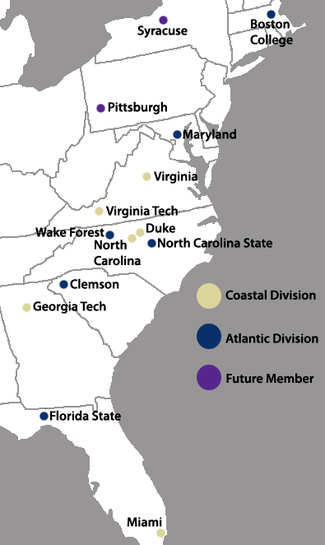 Historically, the ACC has been considered one of the most successful conferences in men's basketball. The early roots of ACC basketball began primarily thanks to two men: Everett Case and Frank McGuire.

The North Carolina State coach Everett Case had been a successful high school coach in Indiana who accepted the Wolfpack's head coaching job at a time that the school's athletic department had decided to focus on competing in football on a level with Duke, then a national power in college football. Case's North Carolina State teams dominated the early years of the ACC with a modern, fast-paced style of play. He became the fastest college basketball coach to reach many "games won" milestones.

Case eventually became known as The Father of ACC Basketball. Despite his success on the court, he may have been even a better promoter off-the-court. Case realized the need to sell his program and university. That is why he organized the funding and construction of Reynolds Coliseum in Raleigh, North Carolina, as the new home court for his team. At the time, the Reynolds Coliseum was the largest on-campus arena in America, and it was therefore used as the host site for many Southern Conference Tournaments, ACC Tournaments, and the Dixie Classic, an annual event involving the four ACC teams from North Carolina as well as four other prominent programs from across the nation. The Dixie Classic brought in large revenues for all schools involved and soon became one of the premier sporting events in the South.

At North Carolina, Frank McGuire was hired as the men's basketball coach to counter Case's personality, as well as the dominant success of his program. McGuire began recruiting in his home area of New York. McGuire knew that basketball was the major high school athletic event of the region, unlike football in the south. Case and McGuire literally invented a rivalry. Both men realized the benefits created through a rivalry between them. It brought more national attention to both of their programs and increased fan support on both sides. For this reason, they often exchanged verbal jabs at each other in public, while maintaining a secret working relationship in private.

In 1957, when McGuire's North Carolina team won the national championship, an entrepreneur from Greensboro named Castleman D. Chesley noticed the popularity that it generated. He developed a five-station television network which began broadcasting regular season ACC games the following season. From that point on, ACC basketball gained large popularity.

The table below lists each school's two permanent scheduling partners.

Over the course of its existence, ACC schools have captured 12 NCAA men's basketball championships. North Carolina has won five, Duke has won four, NC State has won two, and Maryland has won one. In addition, 8 of the 12 members have advanced to the Final Four at least once. (note: UNC also hangs a banner for a 1924 National Championship which was awarded by Helms Foundation in the 1940s. This championship is not recognized by the NCAA.)

In women's basketball, the ACC has won two national championships, North Carolina in 1994 and Maryland in 2006. In 2006, Duke, Maryland, and North Carolina all advanced to the Final Four, the first time a conference placed three teams in the women's Final Four. Both 2006 NCAA women's finalists were from the ACC, with Maryland defeating Duke for the title.

The ACC has won 16 of the 30 NCAA Championships in field hockey. The conference is assured of a 17th national title in 2011, as Maryland and North Carolina will play in the final on November 20.

In 2005, the ACC began divisional play in football. Division leaders compete in a playoff game to determine the ACC championship. The inaugural Championship Game was played on December 3, 2005, in Jacksonville, Florida, at the stadium then known as Alltel Stadium, in which Florida State defeated Virginia Tech to capture its 12th championship since it joined the league in 1992. The 2010 ACC Championship Game was played at Bank of America Stadium in Charlotte, North Carolina with Virginia Tech defeating Florida State 44–33.

The ACC was the only NCAA Division I conferences whose divisions are not divided geographically (North/South, East/West)[9] until the Big Ten announced its division names after the 2010 regular season.[10]

This division structure leads to each team playing the following games:

In the table below, each column represents one division. Each team's designated permanent rival is listed in the same row in the opposing column.[11]

Within the Bowl Championship Series, the Orange Bowl serves as the home of the ACC champion against another BCS at-large selection unless the conference's champion is selected for the national championship game.

The other bowls pick ACC teams in the order set by agreements between the conference and the bowls. The ACC Championship Game runner-up is guaranteed to fall no lower than the Sun Bowl, the 4th pick, in the conference bowl hierarchy.[12] Previously the ACC Championship Game runner-up had been guaranteed the Music City Bowl with usually then the 5th pick.[13] The other rule change that will be in effect for the next four years is that the ACC has eliminated the clause in the contract that states if a bowl team has already selected the runner-up, it doesn't have to choose it again.[12]

Moreover, a bowl game can bypass a team in the selection process only if the two teams in question are within one game of each other in the overall ACC standings. This rule was instituted in response to concerns over the 2005 bowl season, in which Atlantic Division co-champion Boston College fell to the ACC's then-last remaining bowl slot, the MPC Computers Bowl in Boise, Idaho.

* Unless the ACC champion is ranked #1 or #2 in the BCS poll, in which case the ACC champion will play in the national championship game, and the Orange Bowl will select one of the other BCS teams.

** The Kraft Fight Hunger Bowl has a conditional arrangement with the ACC: if its primary partners are not bowl eligible, and if the ACC has nine bowl-eligible teams, then the bowl takes the ninth selection of ACC teams.[14]

In men's soccer, the ACC has won 14 national championships, including 13 in the 26 seasons between 1984 and 2009. Six have been won by Virginia - including 2009 against the previously undefeated Akron Zips. The remaining eight have been won by Maryland (3 times), Clemson (twice), Duke, North Carolina, and Wake Forest. During the 2007 season, Virginia Tech and Wake Forest advanced to the College Cup, the final four of men's soccer. The 2008 season saw two ACC teams, Maryland and North Carolina, meet in the championship game with Maryland winning by a score of 1-0.

In women's soccer, North Carolina has won 20 of the 27 NCAA titles since the NCAA crowned its first champion, as well as the only Association for Intercollegiate Athletics for Women (AIAW) soccer championship in 1981. The Tar Heels have also won 18 of the 21 ACC tournaments, losing to North Carolina State in 1988 and Virginia in 2004, both times by penalty kicks. In 2010 for the first time they failed to make the championship game, falling to eventual champion Wake Forest in the semi-finals.