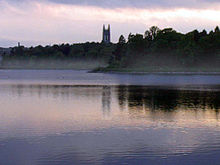 Chestnut Hill is a wealthy New England village located six miles (10 km) west of downtown Boston, Massachusetts, United States. Like all Massachusetts villages, Chestnut Hill is not an incorporated municipal entity, but unlike most of them, it encompasses parts of three separate municipalities, each of which is in a different county: the town of Brookline in Norfolk County; the city of Boston in Suffolk County (parts of its neighborhoods of Brighton and West Roxbury), and the city of Newton in Middlesex County (all of its village of Chestnut Hill). Chestnut Hill's borders are roughly defined by the Chestnut Hill, MA 02467 ZIP Code. Chestnut Hill is not strictly a topographical designation; the name refers to a series of small hills that overlook the 135-acre (546,000 m²) Chestnut Hill Reservoir rather than one particular hill. Chestnut Hill is perhaps best known as the home of Boston College, part of the Boston Marathon route, as well as the Collegiate Gothic canvas of the world famous architect, Frederick Law Olmstead.[1]

While most of Chestnut Hill remained farmland well into the early twentieth century, the area around the reservoir was developed, in 1870, by renowned landscape architect Frederick Law Olmsted, designer of Central Park in New York and of the Emerald Necklace in Boston and Brookline.

Because of the significance of its landscape and architecture, the National Register of Historic Places, in 1986, designated parts of Chestnut Hill as historic districts. Examples of Colonial, Italianate, Shingle, Tudor Revival, and Victorian architectural styles are evident in the village's country estates and mansions. The Boston College campus is itself an early example of Collegiate Gothic architecture.

Chestnut Hill is served by three branches of the Green Line of the MBTA, Boston's light rail system. Stations include: