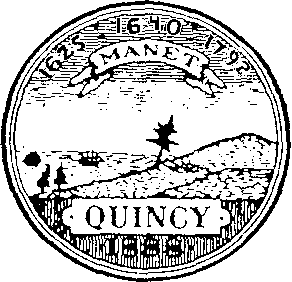 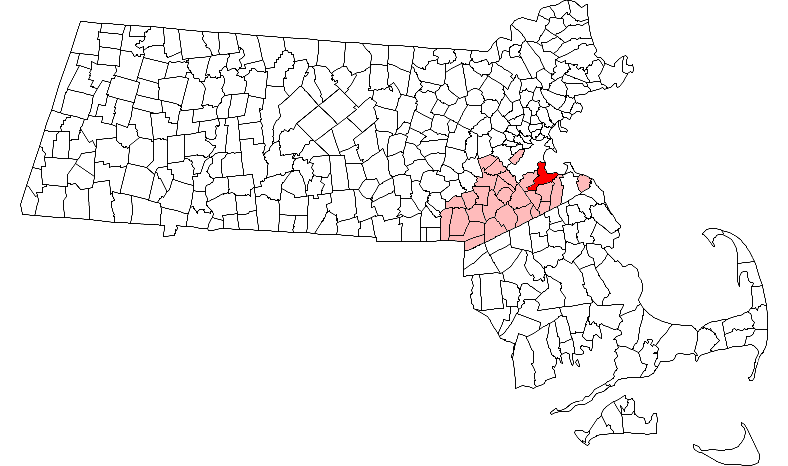 Quincy is a city in Norfolk County, , . Its nicknames are "The City of Presidents", "City of Legends", and "Birthplace of the American Dream". [ [http://www.ci.quincy.ma.us/AboutQuincyPage5.html Quincy About Page] ] As a major part of , Quincy is a member of 's Inner Core Committee for the Metropolitan Area Planning Council. [ [http://www.mapc.org/metro_area/innercore.html Inner Core Committee members] ] Its name, which comes from that of Colonel John Quincy, is correctly pronounced IPA|/ˈkwɪnzi/, [ [http://www.ci.quincy.ma.us/AboutQuincyPage5.html City of Quincy, Massachusetts] ] though non-locals often mispronounce it as IPA|/ˈkwɪnsi/. Quincy is the birthplace of former Presidents and , as well as statesman . The population was 88,025 at the 2000 census.

The Wollaston neighborhood is the oldest part of Quincy, first settled by English immigrants in 1625 as Mount Wollaston and renamed Merrymount. Quincy itself later became part of Braintree, was officially incorporated as a separate town in 1792, and was made a city in 1888.

Among its several firsts was the , the first commercial in the . It was constructed in 1826 to carry from a Quincy quarry to the in Milton so that the stone could then be taken by boat to erect the in . Quincy granite became famous throughout the nation, and stonecutting became the city's principal economic activity.Quincy was also a notable center. Sailing ships were built in Quincy for many years, including the only seven-masted ever built, "Thomas W. Lawson". The Fore River area became a shipbuilding center in the 1880s&mdash;originally owned by of telephone fame&mdash;and many famous warships were built at the , including the ; the s , now preserved as a at in Massachusetts, and ; and the , the world's last all-gun heavy warship, which is still preserved at Fore River as the main exhibit of the . John J. Kilroy, the originator of the famous graffiti, was a inspector at Fore River.

Quincy was also an pioneer. Dennison Field in the section of town was one of the world's first airports and was partially developed by . In 1910, it was the site of the , the second air show in America. It was later leased to the Navy for an airfield, and served as a reserve into the 1950s.

Of some note, and were founded and started in Quincy, and the celtic punk band got its start in Wollaston. The in , founded in 1846, was named after Quincy because the mine started with significant investment from Massachusetts.

Quincy shares borders with Boston to the north (separated by the ), Milton to the west, Randolph to the south, and Hull (maritime border), Weymouth, and Braintree to the east.

Although Quincy is primarily urban, convert|2485|acre|sqmi km2|1 [ [http://www.mass.gov/mgis MassGIS Protected and Recreational Open Space data, last updated 2008-07-10] ] or fully 23 percent of its land area lies within the uninhabited , a state park managed by the Massachusetts Department of Conservation and Recreation. This undeveloped natural area encompasses the southwestern portion of Quincy and includes the city's highest point, convert|517|foot|m Chickatawbut Hill.

There are several beaches in Quincy, [ [http://www.ci.quincy.ma.us/AboutBeachesCommPage115.html About Quincy beaches] ] including along Quincy Shore Drive. Located on Quincy Bay, Wollaston Beach is the largest beach in . [ [http://www.tbha.org/programs_beaches_wollastonbeach.htm Boston Harbor Association] ]

Quincy is divided into numerous with histories all their own. [ [http://www.ci.quincy.ma.us/AboutNeighborhoodsPage112.html Quincy Neighborhoods] ]

Quincy is home to various educational institutions, including both a public and a private college.

*, a two-year community college and the only institution owned and operated by a in .

Because Quincy is part of , it has easy access to transportation facilities. State highways and the Interstate system connect the Greater Boston area to the airport, port, and intermodal facilities of . Due to its proximity to Boston proper, Quincy is connected not only by these modes of transportation but Boston's subway system, the T.

Subway service is available on the Red Line of the (MBTA) from 4 separate T stations: North Quincy, Wollaston, Quincy Center, and Quincy Adams.

Boston's is accessible via MBTA Red Line connections at South Station, directly on the MBTA commuter boat (see below) or by motor vehicle using or surface roads to the .

Active sporting programs include the Red Raiders of , the Presidents of , and the Crusaders of . Quincy hosted the youth baseball World Series in 2003 and 2005, and will do so again in 2008. Both high school and Babe Ruth League games are played at Adams Field.

Quincy has had brief flirtations with professional sports. The Quincy Chiefs of the minor league (the predecessor to the current ) played a single season in 1977-78, and was coached and managed by current executive . The Chiefs finished 12-19 in third place, and lost in the playoffs to eventual league champion .

Quincy has also briefly had a professional baseball team. The Quincy Shipbuilders competed in the in 1933, recording a 12-6 record before moving to Nashua midseason.