Nashua is a city in Hillsborough County, New Hampshire, USA. As of the 2010 census, Nashua had a total population of 86,494,[1] making it the second largest city in the state (and in the three northern New England states) after Manchester.

Built around the now-departed textile industry, in recent decades it has been swept up in southern New Hampshire's economic expansion as part of the Boston region. Nashua was twice named "Best Place to Live in America" in annual surveys by Money magazine.[2] It is the only city to get the No. 1 ranking on two occasions—in 1987 and 1997. In 2007, the Morgan Quitno Press ranked Nashua as the 27th safest city in the country. 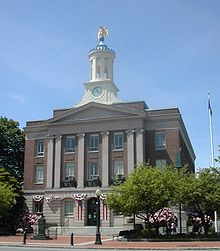 Located at the confluence of the Nashua with the Merrimack River, Dunstable was first settled about 1655 as a fur trading town. But like many 19th century riverfront New England communities, it would be developed during the Industrial Revolution with textile mills operated from water power. By 1836, the Nashua Manufacturing Company had built three cotton mills which produced 9.3 million yards of cloth annually on 710 looms. On December 31, 1836, Dunstable was renamed Nashua after the Nashua River by a declaration of the New Hampshire legislature. The Nashua River was named by the Nashuway Indians, and in the Penacook language it means "beautiful stream with a pebbly bottom."[3] The town split in two for eleven years following a tax dispute in 1842 between the area north of the Nashua River, where most of the wealthy lived, and the area south of the river. During that time the northern area called itself Nashville, while the southern part kept the name Nashua. They would eventually reconcile and join together to charter the city of Nashua in 1853. Six railroad lines crossed the mill town, with 56 trains entering and departing daily before the American Civil War.

Like the rival Amoskeag Manufacturing Company upriver in Manchester, the Nashua Manufacturing Company prospered until about World War I, after which it began a slow decline. Water power was replaced with newer forms of energy to run factories. Cotton could be manufactured into fabric where it grew, saving transportation costs. The textile business started moving to the South during the Great Depression, with the last mill closing in 1949. Many citizens were left unemployed. But then Sanders Associates, a newly created defense firm that is now part of BAE Systems, moved into one of the closed mills and launched the city's rebirth. Sam Tamposi is credited with much of the city's revival. The arrival of Digital Equipment Corp. (now part of Hewlett-Packard) in the 1970s made the city part of the Boston-area high-tech corridor.

According to the United States Census Bureau, the city has a total area of 31.8 square miles (82.4 km2), of which 30.9 sq mi (80.0 km2) is land and 0.9 sq mi (2.3 km2) is water, comprising 2.98% of the city. The eastern boundary of Nashua is formed by the Merrimack River, and the city is drained by the Nashua River and Salmon Brook, tributaries of the Merrimack. The Nashua River roughly bisects the city. The highest point in Nashua is Long Hill in the southern part of the city, at 418 feet (127 m) above sea level.

The city is bordered on the east by the Merrimack River, across which lies the town of Hudson, New Hampshire.

There were 35,044 households out of which 28.7% had children under the age of 18 living with them, 45.9% were married couples living together, 11.6% had a female householder with no husband present, and 37.6% were non-families. 29.4% of all households were made up of individuals and 9.6% had someone living alone who was 65 years of age or older. The average household size was 2.42 and the average family size was 3.01.

The city's government is headed by a mayor and fifteen aldermen: six at-large aldermen elected three at a time every four years, and nine ward aldermen, one for each ward in the city, elected every two years.

Nashua's downtown is a regional commercial, entertainment, and dining destination. Recent plans have incorporated the Nashua River into the design of a pedestrian-friendly walkway. The Nashua Riverwalk is a large, public/private venture funded through the use of Tax Increment Financing (TIF).

The large commercial districts located on Amherst Street (Route 101A) and Daniel Webster Highway are shopping havens, with the one at Daniel Webster Highway, including the Pheasant Lane Mall, attracting many people from Massachusetts taking advantage of the nonexistence of sales tax in New Hampshire.

The city is home to a number of technical firms, including Nashua Corporation, which took its name from the city and river. Nashua Corp. was a leading producer of floppy disks through the early 1990s, making the Nashua name well-known in the world of personal computers.

The city is in the process of building what many locals call the "Broad Street Parkway", a major highway development that will connect Nashua's Welcome Center off Exit 6 to the city's downtown area ("Tree Streets" neighborhood), with the goal of easing traffic congestion and opening up Nashua's old mill-yard as part of the city's economic development. Work on the project is expected to start in May 2011 and be completed by 2014. The new Parkway will provide a third crossing of the Nashua River, and a way for traffic to avoid Library Hill, a busy downtown intersection. The idea of a road connecting Broad Street with Hollis Street within the city has been discussed since the 1960s.[7]

The city is currently working with Renaissance Downtowns, a Plainville, New York development company, to develop a mixed commercial and residential development on 26 acres (11 ha) of city and privately owned land off Bridge Street. A riverfront location and proximity to downtown have made the site attractive to developers. The property is a half mile from Main Street and lies along the Nashua and Merrimack rivers near Veterans Memorial Bridge, the eastern gateway to the city.[8]

The Everett Turnpike is the major highway running through the city. U.S. Route 3 follows the turnpike from the Massachusetts border north to exit 7E, where it branches to the northeast along the two-lane Henri A. Burque Highway to Concord Street and then heads north into the town of Merrimack. Nashua Municipal Airport (Boire Field), a general aviation facility, is in the city's northwest corner. The nearest commercial airports are Manchester-Boston Regional Airport in Manchester, and Logan International Airport in Boston. Public transportation is provided by the Nashua Transit System, which runs a bus line. Efforts are being made to extend the Massachusetts Bay Transportation Authority's commuter rail Lowell Line from Lowell to Nashua. The state legislature created the New Hampshire Rail Transit Authority (NHRTA) in 2007 with the goal of overseeing the development of commuter rail in the state. In 2011, Republican lawmakers introduced a bill (HB 218) to eliminate the NHRTA. Currently, proposed commuter rail stops include Nashua, Manchester and Concord.[9]

Maps of the Nashua area often show a stretch of freeway forming a circumferential highway through Nashua and the neighboring town of Hudson. Only a small section of the south end of this highway (Exit 2 off U.S. Route 3) has been built, and it is unclear whether the highway will ever be completed. If finished, the Nashua-Hudson Circumferential Highway would be part of the Everett Turnpike, and would rejoin the mainline highway at a hypothetical Exit 9 in northern Nashua.

Boston Express, a subsidiary of Concord Trailways operates a Nashua-Boston bus line that runs out of the Nashua Transit Center off of Exit 8 on the Everett Turnpike (used to service Exit 6 until late October 2010). This bus line transports passengers to South Station and Logan International Airport in Boston. [1]

The city has a daily newspaper, the Nashua Telegraph, which is printed in neighboring Hudson, New Hampshire, and a daily news website, Nashua Patch, a part of the Patch.com network.

Nashua also has two weekly newspapers, The Broadcaster and The Hippo.

Nashua radio stations include WGHM 900 AM (FOX Sports Radio), talk WSMN 1590 AM, back on the air after going dark in January 2005, and 106.3 WFNQ, a classic hits station owned by Nassau Broadcasting Partners. WEVS 88.3 and 90.3 serve as the stations for New Hampshire Public Radio. One television station is licensed to Nashua: WYCN-LP, a low power, community-based television station branded as tv13 Nashua, with studios located at Rivier College.

In the 2000 U.S Census, 22,700 residents over age three were enrolled in a Nashua educational institution, approximately a fourth of the city.[10] 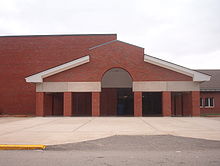 Nashua has had a series of professional baseball teams. The Nashua Silver Knights, part of a summer collegiate league, is the city's current team. The Nashua Pride, a Can-Am minor league baseball team, played at Holman Stadium from 1998 through 2008, then changed to the American Defenders of New Hampshire in the 2009 season. The Defenders were evicted from the venue in August 2009, however, because of non-payment of rent, and moved to Pittsfield, Massachusetts to become the Pittsfield Colonials. Before the Pride, Holman was the home stadium for the independent Nashua Hawks; the AA Nashua Pirates; the AA Nashua Angels; and the A Nashua Dodgers, the first racially integrated professional baseball team in the 20th century.[11]

In collegiate sports, Nashua is home to the Daniel Webster College Eagles and Rivier College Raiders, who compete in the Great Northeast Athletic Conference or GNAC.

A few episodes of TV show The Office were set in a fictional Nashua branch of Dunder Mifflin. An episode of MTV's MADE was filmed in 2004 at Nashua High School North. Nashua is also frequently referenced and visited by various characters on the serial drama television show The West Wing.