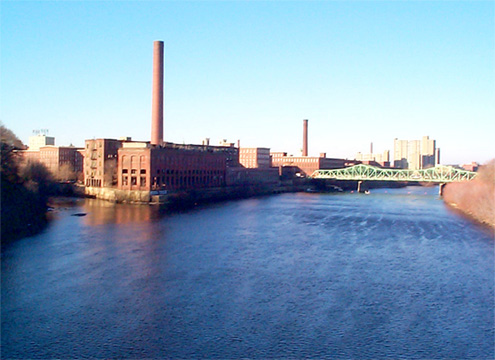 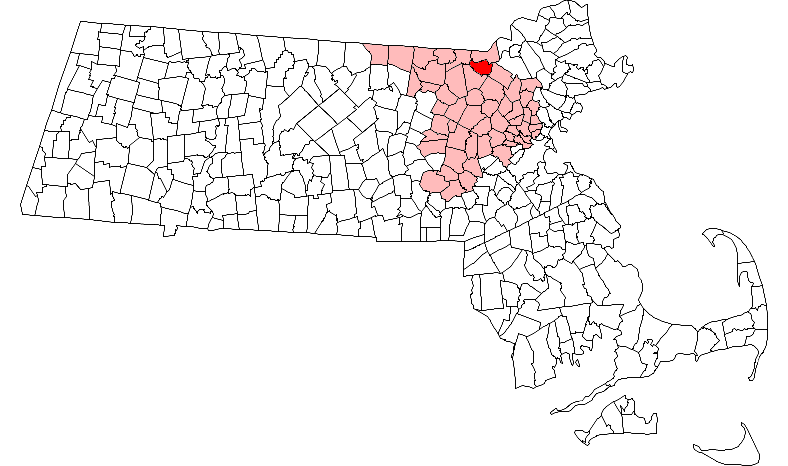 Lowell is a city in Middlesex County, , USA. As of the 2000 census, the city had a total population of 105,167. It is the fourth largest city in the state. It and Cambridge are the s of Middlesex County.GR|6

Founded as a planned center for s along the northwest of Boston on land sectioned from neighboring , it was a thriving industrial center during the 19th century, attracting many immigrants and migrant workers to its mills. With the decline of its manufacturing in the 20th century, the city fell into deep hard times but has begun to rebound in recent decades. The former mill district along the river is partially restored and is a part of the .

The zip code 01851 is the southwestern section of the city, bordered to the east by the Lowell Connector and to the north by the railroad. This area is commonly referred to as the Lowell Highlands. The Lower Highlands refers to the portion of this area closest to downtown. Middlesex Village, Tyler Park and Drum Hill are in this zip code.

The zip code 01852 is the southeastern section of the city. It is south of the and bordered to the west by the Lowell Connector, towards the south. This zip code includes Lowell's city offices, downtown, Belvidere, Back Central and South Lowell. Belvidere is the mostly residential area south of the Merrimack River, east of the Concord River and north of the Lowell and Lawrence railroad. Belvidere Hill is an Historic District along Fairmount St. Lower Belvidere refers to the section west of Nesmith Street. Back Central is an urban area south of downtown towards the mouth of River Meadow Brook. South Lowell is the area south of the railroad and east of the Concord River. Other neighborhoods in this zip code are Ayers City, Bleachery, Chapel Hill, the Grove, Oaklands, Riverside Park, Swede Village and Wigginsville, but their use is mostly antiquated.

The zip code 01854 is the northwestern portion of the city and includes Pawtucketville, the and the Acre.

The bordering towns (clockwise from north) are Dracut, Tewksbury, Billerica, Chelmsford, and Tyngsboro. The border with Billerica is a point in the middle of the Concord River where Lowell and Billerica meet Tewksbury and Chelmsford.

The ten communities designated part of the Lowell Metropolitan area by the 2000 US Census are Billerica, Chelmsford, Dracut, Dunstable, Groton, Lowell, Pepperell, Tewksbury, Tyngsboro, and Westford, and Pelham, NH. See .

There were 37,887 households out of which 34.0% had children under the age of 18 living with them, 40.1% were married couples living together, 17.4% had a female householder with no husband present, and 36.7% were non-families. 29.0% of all households were made up of individuals and 9.3% had someone living alone who was 65 years of age or older. The average household size was 2.67 and the average family size was 3.35.

For public transit, Lowell is served by the , which provides fixed route services and services to the city and surrounding area. These connect at the Gallagher Transit Terminal to the of the MBTA commuter rail system, which connects Lowell to Boston. The terminal is also served by several intercity bus lines.

The provides a free shuttle between its various sites in the city centre, using track formerly used to provide freight access to the city's mills.

*Canal Walk (Lowell) - Walking trails along the 5.6 miles of canals of Lowell
*Lowell-Dracut-Tyngsboro State Forest - Hiking, biking, and cross-country skiing trails in an urban state forest
* - performance venue
*
*New England Golden Gloves - Boxing
* - concert venue
*
*Vandenberg Esplanade - Walking, biking, swimming, and picnicking park along the banks of the
* [http://www.marstonlofts.com The Marston Building] - Built in 1889, this historic building is located at 155 Middlesex Street. It is a good example of the mixed styles of Lowell architecture from that time. Renovated in 2008, it is now has been converted to artist live/work lofts.

* Baseball Stadium, shared by Lowell Spinners and the University of Massachusetts Lowell
* - performance and boxing venue
* - multi-use sports and concert venue (6500 seats hockey, 7800 concerts)- Lowell Devils, the University of Massachusetts Lowell River Hawks, and various arena shows
*- Stadium for Lowell High School and other sporting events around the . Uses
* - Outdoor amphitheater on the banks of the

The city is the subject of 's song, "Lowell, MA," from their album

The city was also featured in the song "Lowell Man" by Tom Doyle. Doyle, of 105.7 in Boston, does many songs like this spoofing classic rock by rewording them to make fun of various things about New England (Lowell Man is a spoof of "Soul Man" by the Blues Brothers).

Lowell has also been the subject of a number of novels. Some of the better known ones are:
* , who was born in Lowell, set several biographical novels there, including and .
* 's novel "Lyddie" tells the fictional story of a Lowell Mill Girl in the nineteenth century who fights for better working conditions in the hot, crowded and dangerous mills. She also discovers true friendship, love, and how to handle the hardballs of life. Lyddie is a brave and intelligent young girl searching for a way to make money in order to save her farm. She and her brother eventually get separated and work for their dream. While they work, their mother and their small family fight to survive.
* In Avi's "Beyond The Western Sea Book 2: Lord Kirkle's Money" Lowell is the destination of immigrants hoping to reach America and begin new lives.
* Nancy Zaroulis' "Call The Darkness Light," a novel about a young woman left alone in the world following the death of her father, tells the story of the mid-19th century and the realities of the .
* 's poem "My Home Town", from his inspirational poetry book, "A Journey: Of Life, Love and Laughter", deals with his life—being born in Lowell, leaving for a new home, and coming back to his real home in Lowell.

* - 2004 documentary film by on the lives of three Cambodian-American teenage adolescents in Lowell and how they were affected positively by traditional Cambodian dance, especially with Lowell's Angkor Dance Troupe.
*, a new film by director/writer/star was filmed principally in Lowell. The film also stars , , and .
* - An HBO film made in 1995 documenting the lives of three crack cocaine addicts.