Frederick Law Olmsted (April 26, 1822 – August 28, 1903) was an American journalist, social critic, public administrator, and landscape designer. He is popularly considered to be the father of American landscape architecture, although many scholars have bestowed that title upon Andrew Jackson Downing. Olmsted was famous for co-designing many well-known urban parks with his senior partner Calvert Vaux, including Central Park and Prospect Park in New York City.[2]

Other projects that Olmsted has been involved in include the country's first and oldest coordinated system of public parks and parkways in Buffalo, New York; the country's oldest state park, the Niagara Reservation in Niagara Falls, New York; one of the first planned communities in the United States, Riverside, Illinois; Mount Royal Park in Montreal, Quebec; the Emerald Necklace in Boston, Massachusetts; also the Emerald Necklace of parks in Rochester, New York; Deering Oaks Park in Portland, Maine; the Belle Isle Park, in the Detroit River for Detroit, Michigan; the Presque Isle Park in Marquette, Michigan; the Grand Necklace of Parks in Milwaukee, Wisconsin; the Cherokee Park and entire parks and parkway system in Louisville, Kentucky; Springfield, Massachusetts' 735-acre Forest Park, featuring America's first public "wading pool" [3]; the George Washington Vanderbilt II Biltmore Estate in Asheville, North Carolina; the master plans for the University of California, Berkeley and Stanford University near Palo Alto, California; and the Montebello Park in St. Catharines, Ontario. In Chicago his projects include: Marquette Park; Jackson Park; Washington Park; the Midway Plaisance for the 1893 World's Columbian Exposition; the south portion of Chicago's "'emerald necklace'" boulevard ring; Cadwalader Park in Trenton, New Jersey; and the University of Chicago campus. In Washington, D.C. he worked on the landscape surrounding the United States Capitol building. One of his lesser known works is Point Chautauqua. Olmsted was hired by the Baptist Church to develop a residential community that blended in seamlessly with the natural world around it.

Olmsted was born in Hartford, Connecticut, on April 26, 1822. His father, John Olmsted, was a prosperous merchant who took a lively interest in nature, people, and places; Frederick Law and his younger brother, John Hull, also showed this interest. His mother, Charlotte Law (Hull) Olmsted, died when he was scarcely four years old. His father remarried in 1827 to Mary Ann Bull, who shared her husband's strong love of nature and had perhaps a more cultivated taste.

When the young Olmsted was almost ready to enter Yale College, as a graduate of Phillips Academy in 1838, sumac poisoning weakened his eyes so he gave up college plans. After working as a seaman, merchant, and journalist, Olmsted settled on a farm in January 1848 on the south shore of Staten Island which his father helped him acquire. This farm, originally named the Akerly Homestead, was renamed Tosomock Farm by Olmsted. It was later renamed "The Woods of Arden" by owner Erastus Wiman. (The house in which Olmsted lived still stands at 4515 Hylan Blvd, near Woods of Arden Road.)

On June 13, 1859, Olmsted married Mary Cleveland (Perkins) Olmsted, the widow of his brother John (who had died in 1857). He adopted her three sons (his nephews), among them John Charles Olmsted. Frederick and Mary had two children together who survived infancy: a daughter and a son Frederick Law Olmsted, Jr.

Olmsted had a significant career in journalism. In 1850, he traveled to England to visit public gardens, where he was greatly impressed by Joseph Paxton's Birkenhead Park. He subsequently wrote and published Walks and Talks of an American Farmer in England in 1852. This supported his getting additional work.

Interested in the slave economy, he was commissioned by the New York Daily Times (now The New York Times) to embark on an extensive research journey through the American South and Texas from 1852 to 1857. From the Texas trip, Olmsted wrote his narrative account published as A Journey Through Texas (1857). It was recognized as the work of an astute observer of the land and lifestyles of Texas. Olmsted believed that slavery was not only morally odious, but expensive and economically inefficient.[citation needed]

His dispatches to the Times were collected into multiple volumes which remain vivid first-person social documents of the pre-war South. The last of these, Journeys and Explorations in the Cotton Kingdom (1861), was published during the first six months of the American Civil War. It helped inform and galvanize antislavery sentiment in the Northeast. These three volumes were later condensed and edited as a single volume.[4][5]

In 1865, Olmsted cofounded the magazine The Nation.

Andrew Jackson Downing, the charismatic landscape architect from Newburgh, New York, was one of the first who proposed the development of New York's Central Park in his role as publisher of The Horticulturist magazine. A friend and mentor to Olmsted, Downing introduced him to the English-born architect Calvert Vaux. Downing had brought Vaux from England as his architect collaborator. After Downing died in July 1852, in a widely publicized steamboat explosion on the Hudson River, Olmsted and Vaux entered the Central Park design competition together, against Egbert Ludovicus Viele among others. Vaux had invited the less experienced Olmsted to participate in the design competition with him, having been impressed with Olmsted's theories and political contacts. Prior to this, in contrast with the more experienced Vaux, Olmsted had never actually designed and executed a landscape design.

They were announced as winners in 1858. On his return from the South, Olmsted began executing their plan almost immediately. Olmsted and Vaux continued their informal partnership to design Prospect Park in Brooklyn from 1865 to 1873.[6] That was followed by other projects. Vaux remained in the shadow of Olmsted's grand public personality and social connections.

The design of Central Park embodies Olmsted's social consciousness and commitment to egalitarian ideals. Influenced by Downing and his own observations regarding social class in England, China and the American South, Olmsted believed that the common green space must always be equally accessible to all citizens. This principle is now fundamental to the idea of a "public park", but was not assumed as necessary then. Olmsted's tenure as park commissioner in New York was a long struggle to preserve that idea.

Olmsted took leave as director of Central Park to work as Executive Secretary of the U.S. Sanitary Commission, a precursor to the Red Cross in Washington, D.C.. He tended to the wounded during the American Civil War. In 1862, during Union General George B. McClellan's Peninsula Campaign, Olmsted headed the medical effort for the sick and wounded at White House in New Kent County, where there was a ship landing on the Pamunkey River.

On the home front, Olmsted was one of the six founding members of the Union League Club of New York.

In 1863, he went west to become the manager of the Rancho Las Mariposas-Mariposa mining estate in the Sierra Nevada mountains in California. Honoring his early work in preserving Yosemite Valley, the promontory Olmsted Point near Tenaya Lake in Yosemite National Park was named after him.

Olmsted not only created numerous city parks around the country, he also conceived of entire systems of parks and interconnecting parkways to connect certain cities to green spaces. Two of the best examples of the scale on which Olmsted worked are the park system designed for Buffalo, New York, one of the largest projects; and the system he designed for Milwaukee, Wisconsin. 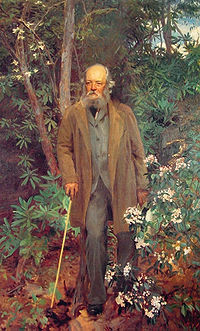 Olmsted was a frequent collaborator with Henry Hobson Richardson, for whom he devised the landscaping schemes for half a dozen projects, including Richardson's commission for the Buffalo State Asylum.[7] H. H. Richardson Complex

In 1883 Olmsted established what is considered to be the first full-time landscape architecture firm in Brookline, Massachusetts. He called the home and office compound Fairsted. It is now the restored Frederick Law Olmsted National Historic Site. From there Olmsted designed Boston's Emerald Necklace, the campuses of Stanford University and the University of Chicago, as well as the 1893 World's Fair in Chicago, among many other projects.

In 1895, senility forced Olmsted to retire. In 1898 he moved to Belmont, Massachusetts and took up residence as a patient at McLean Hospital, whose grounds he had designed several years before. He remained there until his death in 1903. He was buried in the Old North Cemetery, Hartford, Connecticut.

After Olmsted's retirement and death, his sons John Charles Olmsted and Frederick Law Olmsted, Jr. continued the work of their firm, doing business as the Olmsted Brothers. The firm lasted until 1980.

A quotation from Olmsted's friend and colleague architect Daniel Burnham could serve as an epitaph. Referring to Olmsted in March 1893, Burnham said, "An artist, he paints with lakes and wooded slopes; with lawns and banks and forest covered hills; with mountain sides and ocean views."[8]

Between 1857 and 1895, Olmsted designed numerous school and college campuses.

From 1895-1950, the Olmsted Brothers (his successors) added to some of their father's initial projects, as well as designing new ones. (See their article for projects.) Together, these works totaled 355. Some of the most famous of Frederick Law Olmsted are listed here.

Olmsted sites by State and Province

In Erik Larson's The Devil in the White City, Olmsted is featured as one of the most important figures participating in the design of the 1893 Chicago World's Columbian Exposition. In the book, his personality and actions are given significant coverage. In addition, his importance in designing the fair is highlighted (e.g., his part in picking the geographic site and his bureaucratic involvement in planning the fair).