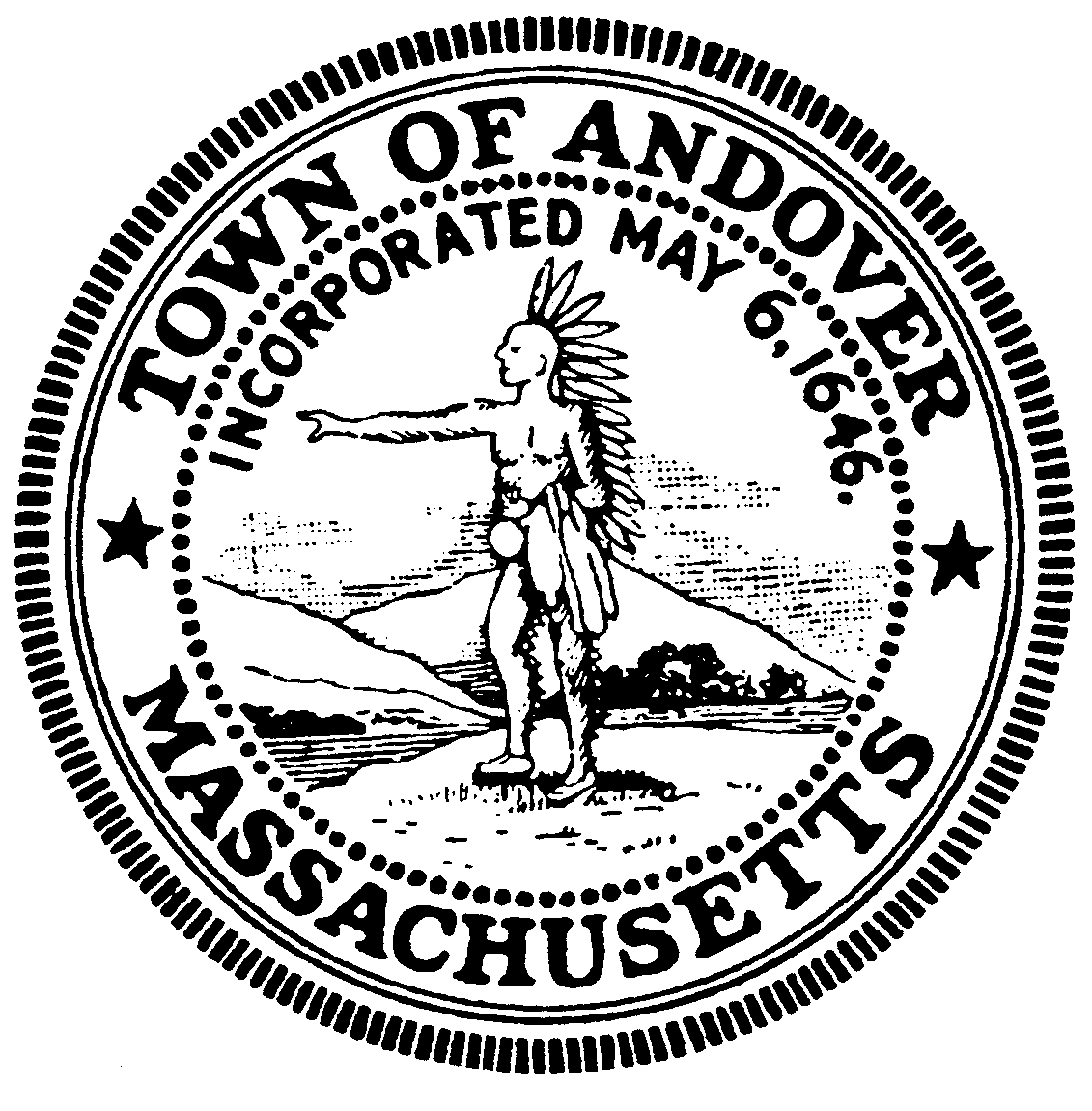 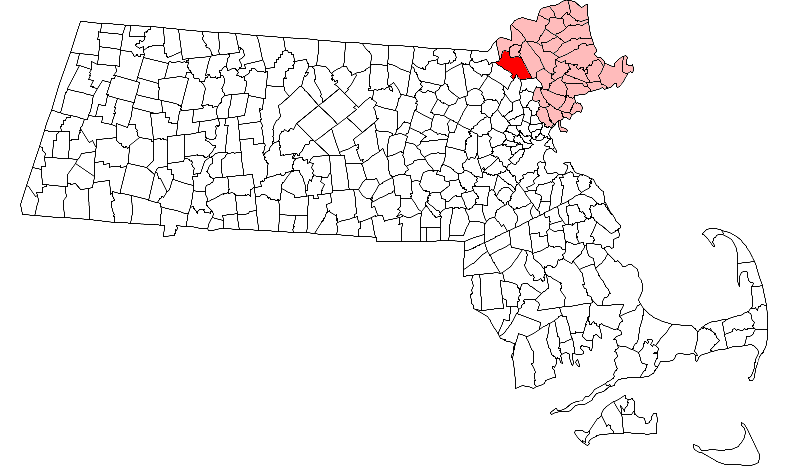 Part of the town comprises the of Andover.

In 1634, the Great and General Court of Massachusetts set aside a portion of land in what is now Essex County for an inland plantation, including parts of what is now Andover, North Andover and South Lawrence. In order to encourage settlement, early colonists were offered three years' immunity from taxes, levies and services (except military service). The first permanent settlement in the Andover area was established in 1641 by and a group of settlers from Newbury and Ipswich.

Shortly after they arrived, they purchased a piece of land from the local tribal chief Cutshamache for the price of "six pounds of currency and a coat" and on the condition that Roger, a local Pennacook man, would still be allowed to plant his corn and take alewives from a local water source. Roger's Brook, a small stream which cuts through the eastern part of town, is named in his honor. In May 1646 the settlement was incorporated as a town and was named Andover. This name was likely chosen in honor of the town of Andover in England, which was near the original home of some of the first residents. The first recorded town meeting was held in 1656 in the home of settler John Osgood.

The old burying ground in what is now North Andover marks the center of the early town. Contrary to popular belief, the towns split due to the location of the Old North Church, also located in what is now North Andover. So technically, what is now Andover was not incorporated as a township until many years after 1646. The villagers from the southwestern part of the town were tired of walking all the way to the extreme north of what was then Andover, and decided to build their own church central to what is now Andover. Logically you would think the northern part of the town would keep the name Andover, due to their higher stake of villagers, but fights and quibbles throughout the church and town meetings ultimately led to the elder part of town being known as what is now North Andover. Early on the general populous was concentrated together around the Old Center (North Andover) for protection from feared Indian attacks, but the Indians were fairly peaceful until the outbreak of in 1675. King Philip was an Indian who organized a revolt against the white settlers throughout most of New England. Six Indian raids occurred between 1676 and 1698 until ever-increasing numbers of white settlers established control of the land. Fact|date=March 2007

During the Salem witch trials in 1692, Andover resident Joseph Ballard asked for help for his wife from several girls in the neighboring who were already identifying witches there. After visiting Elizabeth Ballard, the girls claimed that several people in Andover had bewitched her: Ann Foster, her daughter Mary Lacey Sr. and her granddaughter Mary Lacey Jr. During the course of the legal proceedings, more than 40 Andover citizens, mostly women and their children, were formally accused of having made a covenant with the . Three Andover residents, , , and Samuel Wardwell, were convicted and executed. Five others either pled guilty at arraignment or were convicted at trial: , Mary Lacey Sr., and Abigail Faulkner Sr. (daughter of Andover's minister, ) in 1692 and Wardwell's wife Sarah and Rev. Dane's granddaughter, Elizabeth Johnson Jr. in 1693. Those who were not executed were granted reprieves by Gov. , but the convictions remained on their records. In 1713, in response to petitions initiated in 1703 by Abigail Faulkner Sr. and Sarah Wardwell, Massachusetts Governor reversed the attainder on the names of those who were convicted in the episode.

The two parishes and the division of the town

By 1705, Andover's population had begun to move southward and the idea of a new meeting house in the south end of town was proposed. This was strongly opposed by the people living near the original meeting house in the north, but the dispute was finally settled in 1709 when the Great and General Court divided Andover into two parishes, North and South. After the division of the two parishes, South Andover established the South Parish "Burying-Yard," as it was called, with early Andover settler Robert Russell the first to be interred at age 80 in December, 1710. [ [http://books.google.com/books?id=xf7UNTRnW4gC&pg=PA119&lpg=PA119&dq=%22robert+russell%22+scotland+andover&source=web&ots=gt_aPRzH_m&sig=3k_GwKcWtNG54MniSzWg9u6ugFo&hl=en#PPA512,M1 Historical Sketches of Andover, Sarah Loring Bailey, 1880] ] But despite this split, the town remained politically one unit.

For many years Andover was geographically one of the largest towns in the Commonwealth of Massachusetts; in 1826 a third parish was established and West Parish Church was constructed on Reservation Road. In 1854, a measure was passed to divide the town into two separate political units according to the old parish boundaries. The name Andover was assumed by the more populous and wealthy West and South parishes, while the name North Andover was given to the North Parish.

Andover in the Revolutionary War

Records show that on the morning of April 19, 1775, approximately 350 Andover men marched toward Lexington. Although they did not arrive in time for the battle that day, they did go on to participate in the battle of Bunker Hill two months later and fought in subsequent skirmishes with the Redcoats during the war.

Among the Andover men who were representatives to the Massachusetts Constitutional Convention were Col. , Zebadiah Abbot, John Farnum and Samuel Phillips, Jr. Phillips - who would later go on to found - was later appointed by to help draft the Massachusetts state constitution.

On January 6, 1853, Benjamin "Bennie" Pierce, (1841&ndash;1853) the 11- or 12-year-old son of President-elect , was killed in a train accident in town. The noon express, traveling from Boston to Lawrence, was moving at 40 miles per hour when an axle broke. The only coach, in which Franklin Pierce was also riding, went down an embankment and broke in two. (The baggage car and locomotive had remained on the track.) Pierce's son was the only one killed, but it was initially reported that Pierce was also a fatality. He was only badly bruised. Jane Pierce, the child's mother, was also on the train. The Pierces had previously lost two other children. The death is said to have cast a pall on the couple, especially Jane, who entertained hardly at all in the White House and spent much of her time writing letters to her dead children. She died, still grief-stricken, in 1863. [cite web
title = Jane Means Appleton Pierce
publisher = History Central.com
date =
url = http://www.historycentral.com/Bio/ladies/pierce.html
accessdate = 2006-09-24 ]

The anti-slavery movement had many supporters in Andover long before the began. William Jenkins - an ardent abolitionist and friend of - and several others provided stops on the Underground Railway for runaway slaves. It should be noted that , author of , was a long time resident. Her home, known as "Stowe House," is now owned by Andover. Her body is buried in Phillips Academy's cemetery. When the Confederate Army shelled in 1861, a company of 79 volunteers formed. By the time the war ended in 1865, 600 Andover men had served in the Union Army.

In 1919, the announced plans to build a million dollar mill in the already-existing mill community of Frye Village and rename the region "Shawsheen." The village was completely rebuilt as a "model industrial community" and became the site of the company's headquarters. The mill began operating in 1922 and within two years the village contained more than 200 houses, several community buildings, a few tennis courts, a swimming area, a , an athletic field and a golf course. The employees rented their homes from the company; the brick structures were reserved for upper management and the wooden buildings for those of lesser position. This industrial , however, was short-lived - by the early 1940s almost all of the houses and administration buildings were in private hands. The mills became a victim of changing technology as synthetic fibers became more popular than wool. The American Woolen Company closed its mills in 1953, and the buildings today house a variety of businesses, homes, and apartments. The village left its mark nationally, however, when its team, the won the national soccer championship in 1925.

According to the , the town has a total area of 32.1 s (83.2 ), of which, 31.0 square miles (80.3 km²) of it is land and 1.1 square miles (2.9 km²) of it (3.49%) is water. Significant water areas include the Shawsheen River and Haggetts Pond, located in west Andover, which serves as the town's reservoir. was originally set apart from other waters, but since the late 1990s has had waters added from the nearby to supplement the growing needs of the town.

Andover borders the following cities and towns: Lawrence, North Andover, North Reading, Wilmington, Tewksbury, Dracut and Methuen. Methuen and Dracut are opposite the Merrimack River from Andover, and are not accessible directly from Andover except by , which connects Andover with Methuen. Dracut is unreachable across the Merrimack.

Andover has a public school system.

Andover is an important location for businesses due to its proximity to several major roads in Massachusetts, including I-93, I-95, and I-495. Andover is also on the [http://www.mbta.com/schedules_and_maps/rail/lines/?route=HAVRHILL Haverhill-Boston Commuter Rail Line.] Also by going to Woburn or Haverhill on the Commuter Line you can connect to the Amtrak Train to and . For local bus transportation, Andover is served by the .

*, a prep school founded in 1778 with many famous alumni [http://www.andover.edu/about_andover/notable_alums.htm]
*Andover is home to a large IRS service center, accepting tax forms from several neighboring states.
*Andover is the site of a large factory owned by , the builder of the which warranted a visit from then-President (himself an alumnus of Phillips Academy).
*Andover is home to the second oldest land preservation society in the country, the (AVIS), which controls over 1,100 acres.