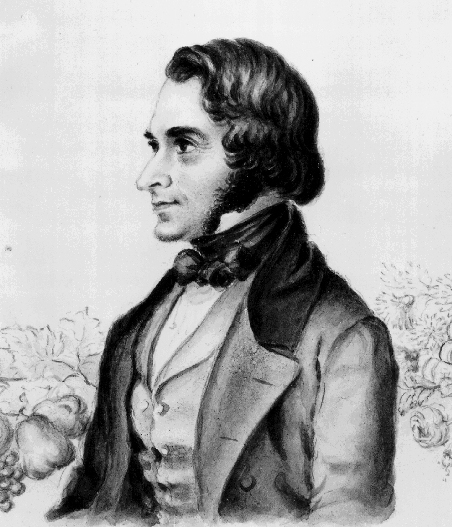 Andrew Jackson Downing (, &ndash; , ) was an American and , a prominent advocate of the Gothic Revival style in the United States, and editor of "The Horticulturist" (1846-52).

Downing was born in , , to Samuel Downing (a nurseryman and wheelwright) and Becky Crandall. After finishing his schooling at 16, he worked in his father's nursery in the Town of Newburgh, and gradually became interested in landscape gardening and architecture. He began writing on botany and landscape gardening and then undertook to educate himself thoroughly in these subjects. His official writing career started when he began writing articles for various newspapers and horticultural journals in the 1830s. In 1841 his first book, "A Treatise on the Theory and Practice of Landscape Gardening, Adapted to North America", was published to a great success; it was the first book of its kind published in the United States.

In 1842 Downing collaborated with on the book "Cottage Residences", a highly influential pattern book of houses that mixed romantic architecture with the English countryside's pastoral picturesque, derived in large part from the writings of . The book was widely read and consulted, doing much to spread the so-called "" and Bracketed architectural styles among Victorian builders, both commercial and private.

With his brother Charles, he wrote "Fruits and Fruit Trees of America" (1845), long a standard work. This was followed by "The Architecture of Country Houses" (1850), another influential pattern book.

By the mid 1840s Downing's reputation was impeccable and he was, in a way, a celebrity of his day. This afforded him a friendship with Luther Tucker—publisher and printer of Albany, New York—who hired Downing to edit a new journal. The Horticulturist, and Journal of Rural Art and Rural Taste was first published under Downing's editorship in the summer of 1846; he remained editor of this journal until his untimely death in 1852. The journal was his most frequent influence on society and operated under the premises of horticulture, pomology, botany, entomology, rural architecture, landscape gardening, and, unofficially, premises dedicated public welfare in various forms. It was in this journal that Downing first argued for a New York Park, which in time became Central Park. It was in this publication that Downing argued for state agricultural schools, which eventually gave rise. And it was here that Downing worked diligently to educate and influence his readers on refined tastes regarding architecture, landscape design, and even various moral issues.

In 1850, as Downing traveled in Europe, an exhibition of continental landscape watercolors by Englishman captured his attention. He encouraged Vaux to emigrate to the United States, and opened what was to be a thriving practice in Newburgh. (1828–1901) joined the firm during its second year. Downing and Vaux worked together for two years, and during those two years, he made Vaux a partner. Together they designed many significant projects, including the grounds in the and the in Vaux’s work on the Smithsonian inspired an article he wrote for "The Horticulturist", in which he stated his view that it was time the government should recognize and support the arts.

Shortly afterwards in 1852, Downing died during the wreck of the steamer&ndash;the ""&ndash;while traveling on the Hudson River with his wife, and her extended family. A boiler explosion quickly spread flames across the wooden vessel and Downing was consumed. A few ashen remains and his clothes were rescued days later. His remains were interred in Cedar Hill Cemetery, in his birthplace of Newburgh, New York. Withers and Vaux took over Downing's architectural practice. After his death, writer and friend referred to Downing as "our country's one solitary promise of a supply for [the] ... scarcity of beauty coin in our every-day pockets. He was the one person who could be sent for... to look at fields and woods and tell what could be made out of them". [Callow, James T. "Kindred Spirits: Knickerbocker Writers and American Artists, 1807–1855". Chapel Hill: The University of North Carolina Press, 1967: 216.]

Downing influenced not only Vaux but also ; the two men met at Downing's home in Newburgh. In 1858, their joint design--the Greensward Plan--was selected in a design competition for the new in New York City. In 1860, Olmsted and Vaux proposed that a bust of Downing be placed in the new park as an "appropriate acknowledgment of the public indebtedness to the labors of the late A. J. Downing, of which we feel the Park itself is one of the direct results." The monument was never built in the park, but a [http://www.dcmemorials.com/index_indiv0000453.htm memorial honoring Downing] stands near the Smithsonian main building in Washington, D.C. Botanist named the genus "" after Downing.

In 1889, the city of Newburgh commissioned a park design from Olmsted and Vaux. They accepted, on the condition that it be named Downing Park after their former mentor. It opened in 1897. It was their last collaboration.

* "A Treatise on the Theory and Practice of Landscape Gardening, Adapted to North America", 1841.
* "Cottage Residences: or, A Series of Designs for Rural Cottages and Adapted to North America", 1842; reprinted as Andrew Jackson Downing, "Victorian Cottage Residences", Dover Publications, 1981.
* "The Architecture of Country Houses: Including Designs for Cottages, and Farm-Houses and Villas, With Remarks on Interiors, Furniture, and the best Modes of Warming and Ventilating", D. Appleton & Company, 1850; reprinted as Andrew Jackson Downing, "The Architecture of Country Houses", Dover Publications, 1969.