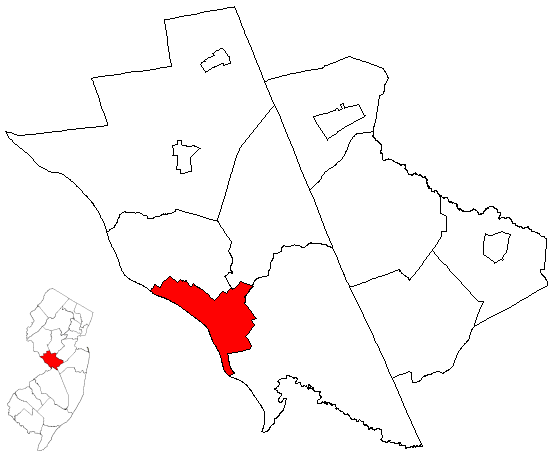 Trenton is the of the of and the of Mercer County. As of 2007, the estimated that the City of Trenton had a population of 82,804.

Trenton dates back to , , when mention was made of a constable being appointed for Trenton, while the area was still part of Hunterdon County. Boundaries were recorded for Trenton Township as of June 3, 1719. Trenton became New Jersey's capital as of , , and the City of Trenton was formed within Trenton Township on , . Trenton Township was incorporated as one of New Jersey's initial group of 104 townships by an Act of the on , . Portions of the township were taken on , , to form Ewing Township. A series of annexations took place over a fifty-year period, with the city absorbing South Trenton borough (, ), portions of Nottingham Township (, ), Chambersburg and Millham Township (both on , ) and Wilbur borough (, ).

The first settlement which would become Trenton was established by Quakers in 1679, in the region then called the Falls of the Delaware, led by from Handsworth, , UK. Quakers were being persecuted in at this time and North America provided the perfect opportunity to exercise their religious freedom.

By 1719, the town adopted the name "Trent-towne", after William Trent, one of its leading landholders who purchased much of the surrounding land from Stacy's family. This name later was shortened to "Trenton".During the , the city was the site of 's first military victory. On , , Washington and his army, after crossing the icy Delaware River to Trenton, defeated the Hessian troops garrisoned there (see ). After the war, Trenton was briefly the national capital of the in November and December of 1784. The city was considered as a permanent capital for the new country, but the southern states favored a location south of the .

Trenton became the state capital in 1790, but prior to that year the Legislature often met here. The town was incorporated in 1792.

Trenton borders Ewing Township, Lawrence Township, Hamilton Township, and the . Several bridges across the Delaware River - the , and - connect Trenton to Morrisville, .

Trenton is located in almost the exact geographic center of the state (the official geographic center is 5 s southeast of Trenton [http://www.usgs.gov/state/state.asp?State=NJ] ). Due to this, it is sometimes included as part of and as the southernmost city of the . Others consider it a part of the and as the northernmost city of the . Following the , Trenton was shifted from the to the . [http://www.njsetc.net/news/Metropolitan%20Area%20Revisions%20Based%20on%20Census%202000%2012-14%201-00.ppt] However, Mercer County constitutes its own , formally known as the Trenton-Ewing MSA. [http://www.census.gov/population/estimates/metro-city/0312msa.txt] Locals consider Trenton to be a part of ambiguous , and thus part of neither region. These same locals are generally split as to whether they are within New York or Philadelphia's sphere of influence.

According to the , Trenton enjoys a humid subtropical climate with some marine influence due to the nearby . The four seasons are of approximately equal length, with precipitation fairly evenly distributed through the year. The temperature is rarely below zero or above 100 °F.

In addition to the minor league teams, sports fans tend to lean towards Philadelphia when rooting for a major league team, especially since local football phenom played for the Eagles.

Between 1948 and 1979 hosted world class auto racing. Famous drivers such as , , , , and all won major races on the one mile asphalt oval and then re-configured 1 1/2 mile race track. The speedway, which closed in 1980, was part of the larger complex, which also closed in 1983. The former site of the speedway and fairgrounds is now the .

* Trenton is one of the only two state capitals which borders another state. The other such capital is , which borders . 's capital city, , borders .

*Porkroll (often incorrectly referred to as Taylor Ham outside the Trenton area [http://www.jerseyporkroll.com/what.htm] ) was invented in Trenton in 1856 by 19th century New Jersey Politician and Trenton native John Taylor.

* The term “” was coined in the 1940’s by Felix "Phil" Pratico Sr. of Chambersburg. The first sign that ever read "Tomato Pies" was posted at “Nate’s Inn” (now called "Nate's Pub") on Lalor Street.

*In 1992, then Vice President infamously misspelled the word 'potato' at a spelling bee in Trenton. [http://www.capitalcentury.com/1992.html]

* The ' cover of the song "" mentions both "Jersey" and "" in different verses, unintentionally leading some people to believe (erroneously) that Trenchtown is a nickname for Trenton.