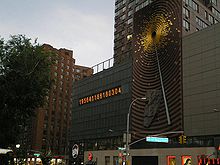 The Eastern Time Zone (ET) of the United States and Canada is a time zone that falls mostly along the east coast of North America. Its UTC time offset is −5 hrs (UTC−05) during standard time and −4 hrs (UTC−04) during daylight saving time. The clock time in this zone is based on the mean solar time of the 75th meridian west of the Greenwich Observatory. 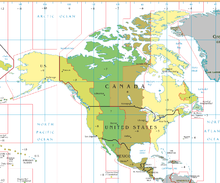 In Canada, the following provinces and territories are part of the Eastern Time Zone:

In the United States the District of Columbia along with seventeen states are entirely located within the Eastern Time zone, while another six are split between the Eastern and Central time zones.

The seventeen states which observe only Eastern time are as follows.

The exact specification for the location of time zones and the dividing line between zones is set forth in the Code of Federal Regulations at 49 CFR 71.[4]

These six states are split between Eastern and Central time.

Eastern Time is also used somewhat as a de facto official time for all of the United States, since it includes the capital (Washington, D.C.), the largest city (New York City), and approximately half the country's population. National media organizations will often report when events happened or are scheduled to happen in Eastern Time even if they occurred in another time zone, and TV schedules are also almost always posted in Eastern Time. Major professional sports leagues also post all game times in Eastern time, even if both teams are from the same time zone, outside of Eastern Time. For example a game time between two teams from Pacific Time Zone will still be posted in Eastern time (for example, one may see "Seattle at Los Angeles" with "10:00 pm" posted as the start time for the game, often without even clarifying the time is posted in Eastern time).

Most cable television and national broadcast networks advertise airing times in Eastern time. National broadcast networks (ABC, CBS, The CW, Fox Network, NBC) generally have two primary feeds, an eastern feed for Eastern and Central time zones, and a western feed for the Pacific time zone. The prime time is set on Eastern and Pacific at 8:00 pm, with the Central time zone stations receiving the eastern feed at 7:00 pm local time. Mountain time zone stations receive a separate feed at 7:00 pm local time. As Arizona does not observe Daylight Saving Time, during the summer months, it has its own feed at 7:00 pm local time. Cable channels with a separate western feed (such as HBO, whose western feed is called "HBOW") generally air the same programming as the eastern feed delayed by three hours. Other cable networks such as the Discovery family of networks repeat their prime time programming three hours later; this allows for the same show to be advertised as airing at "8:00 pm E/P" (that is, "8:00 pm Eastern and Pacific time"). Networks specializing in the airing of sports events, such as ESPN, advertise all of their programming in Eastern and Pacific, incorporating the 3-hour time difference (as in "8:00 pm Eastern/5:00 pm Pacific") and leaving viewers in the remaining time zones to calculate start time in their own areas.

Central American and the Caribbean

Panama and several countries in the Caribbean use UTC−05 all year round.

See also: List of places in the UTC-5 timezone