Chesapeake is a diverse city with few urban areas as well as many square miles of protected farmland, forests, and wetlands, including a substantial portion of the Great Dismal Swamp. Extending all the way from the rural border with North Carolina to the harbor area of Hampton Roads adjacent to the cities of Norfolk and Portsmouth, Chesapeake is located on the Atlantic Intracoastal Waterway and has miles of waterfront industrial, commercial and residential property.

It is currently the third largest city in Virginia in terms of population. According to the 2010 Census, its population is 222,209.[3] 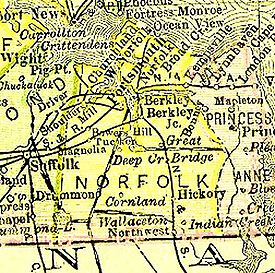 Formed in 1691 in the Virginia Colony, Norfolk County had originally included essentially all the area which became the towns and later cities of Norfolk, Portsmouth, and South Norfolk, but had seen its area frequently reduced as these cities added territory through annexations after 1871. Becoming an independent city was a method for the former county to stabilize borders with neighbors, as cities could not annex territory from each other. Chesapeake is not in Northhampton V.A.

The relatively small City of South Norfolk had become an incorporated town within Norfolk County in 1919, and became an independent city in 1922. It was also motivated to make a change which would put it on a more equal footing in other aspects with the much larger cities of Norfolk and Portsmouth. By the late 1950s, although immune from annexation by the bigger cities, the most recent suit by the City of Norfolk against Norfolk County would have taken all of the county land adjoining South Norfolk.

The changes which created Chesapeake were part of a wave of changes in the structure of local government in southeastern Virginia which took place between 1952 and 1975.

The Chesapeake region has roots extending back to Virginia's colonial past. Along Chesapeake's segment of the Intracoastal Waterway, where the Great Bridge locks mark the transition between the Southern Branch of the Elizabeth River and the Chesapeake and Albemarle Canal, lies the site of the Battle of Great Bridge. Fought on December 9, 1775, in the early days of the American Revolutionary War, the battle resulted in the removal of Lord Dunmore and all vestiges of English Government from the Colony and Dominion of Virginia.

Until the late 1980s and early 1990s, much of Chesapeake was either suburban or rural, serving as a bedroom community of the adjacent cities of Norfolk and Virginia Beach with residents commuting to these locations. Beginning in the late 1980s and accelerating in the 1990s, however, Chesapeake saw significant growth, attracting numerous and significant industries and businesses of its own. This explosive growth quickly led to strains on the municipal infrastructure, ranging from intrusion of saltwater into the city's water supply to congested roads and schools.

Chesapeake made national headlines in 2003 when, under a court-ordered change of venue, the community hosted the first trial of convicted murderer Beltway sniper Lee Boyd Malvo for one of the 2002 terrorist-style attacks. A jury spared him a potential death sentence, choosing a sentence of "life in prison without parole" instead for the young man, who was 17 years old at the time of the crime spree. A jury in neighboring Virginia Beach sentenced his older partner John Allen Muhammad to death for another of the attacks.

The northeastern part of the Great Dismal Swamp is located in Chesapeake.

Chesapeake is one of the larger cities in Virginia and the nation in terms of land, a fact that poses challenges to city leaders in supporting a large infrastructure. The presence of many historically and geographically distinct communities also poses challenges to city leaders, who are also faced with conflicts between development of residential, commercial and industrial areas and preservation of virgin forest and wetlands. Within the city limits in the southwestern section is a large portion of the Great Dismal Swamp. 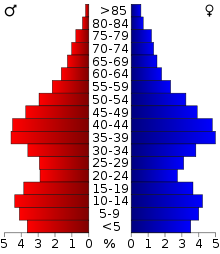 There were 69,900 households out of which 41.0% had children under the age of 18 living with them, 59.7% were married couples living together, 14.0% had a female householder with no husband present, and 22.5% were non-families. 18.0% of all households were made up of individuals and 5.9% had someone living alone who was 65 years of age or older. The average household size was 2.79 and the average family size was 3.17.

According to Chesapeake's 2010 Comprehensive Annual Financial Report,[5] the top employers in the city are:

Of the current boroughs, one, South Norfolk, was formerly a separate incorporated town and independent city for much of the 20th century. Within the other burroughs, a number of communities also developed. Some of these include:

Chesapeake's daily newspaper is the Virginian-Pilot. Other papers include the Port Folio Weekly, the New Journal and Guide, and the Hampton Roads Business Journal.[7] Hampton Roads Magazine serves as a bi-monthly regional magazine for Chesapeake and the Hampton Roads area.[8] Chesapeake is served by a variety of radio stations on the AM and FM dials, with towers located around the Hampton Roads area.[9] Chesapeake is also served by several television stations. The Hampton Roads designated market area (DMA) is the 42nd largest in the U.S. with 712,790 homes (0.64% of the total U.S.).[10] The major network television affiliates are WTKR-TV 3 (CBS), WAVY 10 (NBC), WVEC-TV 13 (ABC), WGNT 27 (CW), WTVZ 33 (MyNetworkTV), WVBT 43 (Fox), and WPXV 49 (ION Television). The Public Broadcasting Service station is WHRO-TV 15. Chesapeake residents also can receive independent stations, such as WSKY broadcasting on channel 4 from the Outer Banks of North Carolina and WGBS broadcasting on channel 7 from Hampton. Chesapeake is served by Cox Communications which provides LNC 5, a local 24-hour cable news television network. DirecTV and Dish Network are also popular as an alternative to cable television in Chesapeake.

Chesapeake and Albemarle Railroad is a shortline railroad in Chesapeake.

The growth of Chesapeake and its predecessors has been fueled by its location and transportation considerations. These continue to be major factors.

Funding for additional and replacement highways, bridges, and other transportation infrastructure is one of the major issues facing Chesapeake and much of the Hampton Roads region in the 21st century, as infrastructure originally built with toll revenues has aged without a source of funding to repair them or build replacements.

Tolls in Chesapeake are currently limited to the Chesapeake Expressway, but new ones may be imposed on some existing facilities to help generate revenue for transportation projects in the region.

Chesapeake is served by the nearby Norfolk International Airport in the City of Norfolk with commercial airline passenger service.

Within the city limits, Chesapeake Regional Airport is a general aviation facility located just south of Great Bridge. Also within the City, is the Hampton Roads Executive Airport located near Bowers Hill and the Hampton Roads Beltway. This airport caters to private airplane owners and enthusiasts. South of there, NALF Fentress is facility of the U.S. Navy and is an auxiliary landing field which is part of the large facility at NAS Oceana in neighboring Virginia Beach.

The Intracoastal Waterway passes through Chesapeake. Chesapeake also has extensive frontage and port facilities on the navigable portions of the Western and Southern branches of the Elizabeth River.

The Dismal Swamp Canal runs through Chesapeake as well. The site of this canal was surveyed by George Washington, among others, and is known as "Washington's Ditch." It is the oldest continuously used man made canal in the United States today and has been in service for over 230 years. The canal begins in the Deep Creek section of the city branching off from the Southern Branch of the Elizabeth River. The canal runs through Chesapeake paralleling U.S. Highway 17 into North Carolina and connects to Elizabeth City, North Carolina.

Five railroads currently pass through portions of Chesapeake, and handle some intermodal traffic at port facilities on Hampton Roads and navigable portions of several of its tributary rivers. The two major Class 1 railroads are CSX Transportation and Norfolk Southern, joined by three short line railroads.

Chesapeake is located on a potential line for high speed passenger rail service between Richmond and South Hampton Roads which is being studied by the Virginia Department of Rail and Public Transportation. A new suburban passenger station near Bowers Hill would potentially be included to supplement a terminal in downtown Norfolk.

Chesapeake is served by U.S. Highways 13, 17, 58, and 460. Interstate 64, part of the Hampton Roads Beltway, crosses through the city, Interstate 464 is a spur which connects it with downtown Norfolk and Portsmouth at the Berkley Bridge, and Interstate 664, which completes the Interstate loop from the Western Branch section of Chesapeake through the City of Newport News and into the City of Hampton.

State Route 168 is also a major highway in the area. It includes the Chesapeake Expressway toll road.

Chesapeake is the only locality in the Hampton Roads area with a separate bridge division. The city's Department of Public Works, Bridges and Structures division has 51 full-time workers. The city maintains 90 bridges and overpasses. Included are five movable span (draw) bridges which open an estimated 30,000 times a year for water vessels.[11]

Major highway bridges in Chesapeake include Steel Bridge, the Gilmerton Bridge, the Jordan Bridge, and the High Rise Bridge, all drawbridges crossing the Southern branch of the Elizabeth River.

The Jordan Bridge was built in 1928 and operated with major weight restrictions. Motorists were charged a 75-cent toll that is used to pay for repairs. In 2008, the Jordan Bridge was closed for good. Replacing the bridge is now in progress with the center span having been removed. Construction is scheduled to begin Summer 2010 on a replacement bridge to be open by Fall of 2011. The new bridge is being privatlely funded just as the Jordon had been originally. Proposed tolls are in the 2 dollar range.

Although ten years newer, replacing the Gilmerton Bridge (built in 1938) on Military Highway is a more urgent need. A four-laned structure on a primary highway with much heavier traffic volume than the Jordan Bridge, the Gilmerton Bridge has suffered rust, cracked concrete and other problems. Much like the Jordan Bridge, the end of its useful life is also near. Replacing the Gilmerton Bridge has been a goal for Chesapeake for many years. In October, 2007, the Norfolk Virginian-Pilot reported that the city had accumulated $142 million in state and federal funding, enough to start building the replacement bridge some time in 2009.[11]

Water and sewer services are provided by the City's Department of Utilities. Chesapeake receives its electricity from Dominion Virginia Power which has local sources including the Chesapeake Energy Center (a coal-fired and gas power plant), coal-fired plants in the City and Southampton County, and the Surry Nuclear Power Plant. Norfolk headquartered Virginia Natural Gas, a subsidiary of AGL Resources, distributes natural gas to the City from storage plants in James City County and in the City.

The Virginia tidewater area has grown faster than the local freshwater supply. Chesapeake receives the majority of its water from the Northwest River in the southeastern part of the city. To deal with intermittent high salt content, Chesapeake implemented an advanced reverse osmosis system at its Northwest River water treatment plant in the late 1990s. The river water has always been salty, and the fresh groundwater is no longer available in most areas. Currently, additional freshwater for the South Hampton Roads area is pumped from Lake Gaston, about 80 miles (130 km) west, which straddles the Virginia-North Carolina border along with the Blackwater and Nottaway rivers. The pipeline is 76 miles (122 km) long and 60 inches (1,500 mm) in diameter. Much of its follows the former right-of-way of an abandoned portion of the Virginian Railway.[12] It is capable of pumping 60 million US gallons (230,000 m3) of water per day. The cities of Norfolk and Virginia Beach are partners in the project.[13]