Naval Air Station Oceana or NAS Oceana (IATA: NTU, ICAO: KNTU, FAA LID: NTU) is a military airport located in Virginia Beach, Virginia, and is a United States Navy Master Jet Base. It is also known as Apollo Soucek Field, named after Lieutenant (later Admiral) Apollo Soucek, a Navy Test Pilot who set the global altitude record in 1930 by flying a Curtiss "Hawk" biplane to an altitude of 43,166 feet. NAS Oceana is the only Master Jet Base on the East Coast.

In 1940, the U.S. Navy acquired the land that would eventually become Naval Air Station Oceana. At that time, the surrounding area was mainly farmland susceptible to flooding, but it served as a useful outlying field for the rapidly expanding Naval Air Force centered at NAS Norfolk and allowed units to work up for deployments away from the crowded base there. Airspace and airfield facility restrictions precluded NAS Norfolk from serving as the home station for tactical air units, and in the 1950s NAS Oceana was expanded to Master Jet Base status to serve that purpose. NAS Oceana has grown to become one of the largest and most advanced air stations in the world, comprising 6,820 acres (including Dam Neck Annex). Obstruction clearances and flight easements total an additional 3,680 acres (14.9 km2). Its four runways—three measuring 8,000 feet (2,400 m) in length and one measuring 12,000 feet—are designed for high-performance aircraft. NAS Oceana's primary mission is to train and deploy the Navy's Atlantic Fleet strike fighter squadrons of F/A-18 Hornets and Super Hornets. Naval Aviators and Naval Flight Officers stationed at NAS Oceana fly approximately 219,000 training operations each year. 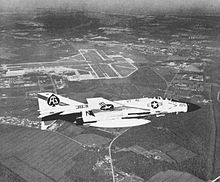 Under the Navy's Master Jet Base concept, all Type/Model/Series (T/M/S) aircraft were homebased at one field with associated intermediate maintenance and training facilities. In the 1960s, NAS Oceana became the home to all East Coast based F-4 Phantom II squadrons. Fighter Squadron 101 (VF-101) established a detachment at NAS Oceana in its role as the Fleet Readiness Squadron (FRS)...formerly known as the Replacement Air Group or "RAG"...that trained aircrews and maintainers to operate the Phantom (at the time, VF-101 operated out of NAS Key West, Florida). After the F-14 Tomcat arrived on the scene in 1976, VF-101 transitioned to Tomcat operations and Phantom training operations shifted to newly established Fighter Squadron 171 (VF-171) to handle Atlantic Fleet training for the F-4 Phantom until it was retired from service in 1984. The last F-14 was retired on 22 September 2006. At one time, in addition to fighter aircraft, all of the Atlantic Fleet's A-6 Intruder medium attack squadrons were also home-based at NAS Oceana, along with VA-42 as the associated Fleet Readiness Squadron charged with training all east coast A-6 pilots, bombardier/navigators and A-6 maintenance personnel. The A-6E was retired from the Fleet in 1997.

Additionally, NAS Oceana became home to the F/A-18 Hornet in 1999 following the Navy's closure of NAS Cecil Field, Florida as part of the Base Realignment and Closure (BRAC) process.

Home to seventeen strike fighter squadrons of F/A-18 Hornets and F/A-18 Super Hornets, the base is the sole East Coast Master Jet Base and home to all the east coast strike-fighter (VFA) units (excluding VFA-86 and Marine Corps VMFA squadrons). Training is conducted by VFA-106 Gladiators in their F/A-18C/D Hornets and F/A-18E/F Super Hornets.

Tomcat training was conducted by the now disestablished VF-101 Grim Reapers. NAS Oceana was host to the "Tomcat Sunset" reunion from 21–23 September 2006, where over 3000 former and current aircrew and maintainers came together to celebrate the retirement of the F-14 from active Fleet service. NAS Oceana also was the location where the F-14 took off for the last time for final flight of the type when F-14D, Bureau Number (BuNo) 164603, Modex 101, of Fighter Squadron31 (VF-31) was ferried from NAS Oceana to Calverton on Long Island, NY for permanent static display at the Northrop Grumman facilities where the Tomcat was originally built.

During the 2005 round of BRAC base closures, it was decided that NAS Oceana could remain open only if certain conditions were met. The most contentious of these requirements was that the city of Virginia Beach buy and condemn approximately 3,400 residences and an unknown number of businesses in crash zones surrounding the base. The BRAC commission proposed moving the fighters to Cecil Field, a recently deactivated naval air station located near Jacksonville, Florida if NAS Oceana was not able to meet that and several other conditions. The plan was initially met with optimism by Jacksonville Mayor John Peyton, even though Cecil Field had already been converted into a joint civil-military airport with helicopter operations by the U.S. Coast Guard and the Florida Army National Guard and an associated commerce park dominated by major aerospace firms such as Northrop Grumman and Boeing performing major maintenance and overhaul work on a variety of military jet aircraft. The senior Navy leadership ultimately expressed disinterest in moving the Master Jet Base back to the Jacksonville area, having only deactivated Cecil Field less than six years earlier and moving all its Atlantic Fleet F/A-18 squadrons from the former NAS Cecil Field to NAS Oceana. In October 2005, the city of Jacksonville removed itself from the process.

On 20 December 2005 the Virginia Beach City Council passed numerous ordinances enacted to satisfy BRAC, but did not act to condemn any of the homes in the designated areas. In a November 2006 referendum, citizens of Jacksonville voted to leave the Cecil Field Airport and Commerce Center in civilian hands under the Jacksonville Aviation Authority, effectively halting any future plans of relocation.

It has been an alternative landing site for NASA's Space Shuttle.

In addition to the squadrons listed, there are numerous other commands present as "tenant" commands at Oceana:

Plans by the Navy to construct an outlying landing field supporting both NAS Oceana and MCAS Cherry Point in eastern North Carolina, initiated in 2006, met with fierce opposition by local residents and environmentalists. Concerns about the ecological impacts of the field, along with noise concerns voiced by residents,[2] led to the abandonment of the initially planned sites for the OLF,[3][4] along with a delay in the project's environmental impact statement.[5][6]

In early 2011, the U.S. Navy announced it was suspending plans for the construction of the outlying landing field until at least 2014.[7]