The Cape Henry Lighthouse has long been important for the large amount of ocean-going shipping traffic for the harbors, its rivers, and shipping headed to ports on the Chesapeake Bay. The original lighthouse was the first lighthouse authorized by the U.S. government, dating from 1792. It was also the first federal construction project under the Constitution, for an original contract amount of $15,200 (an additional $2,500 was required to finish the lighthouse). A second lighthouse was built and completed in 1881 a short distance away after concern arose about the stability of the first.

The first work of the new U.S. Federal government, the first Cape Henry lighthouse was built of stone by John McComb, Jr. and was completed in October, 1792. McComb was one of the architects involved in the construction of New York City Hall and would design other lighthouses. The lighthouse's design was based on the 1767 Cape Henlopen Light.[3] The lighthouse was damaged by Confederate forces during the American Civil War, but was repaired by Union forces in 1863, who depended on the light for navigation.[4] In the 1870s, concerns about the condition and safety of the Old Lighthouse at Cape Henry led to the construction of the New Cape Henry Lighthouse (pictured to the right) in 1881, which stands 350 feet to the southeast of the original.[5] The old tower remained standing, used as a daymark and as a basis for triangulation. The lighthouse was fully automated in 1983 and remains in use today.[6][7] 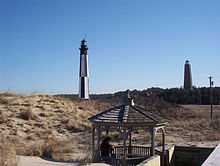 The newer Light Station and the Old Lighthouse at Cape Henry.

In 1798, Benjamin Latrobe visited Cape Henry Lighthouse and described it as "an octangular truncated pyramid of eight sides, rising 90 feet to the light..."[8] The Old Cape Henry Lighthouse is 26 feet in diameter at its base, and 16 feet at its top.[7] It was built with Aquia Creek sandstone from the same source as the White House.[9] 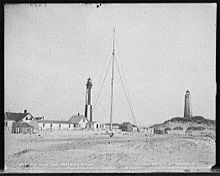 1905 photo of both lighthouses from a different angle. U.S. Library of Congress

The older lighthouse was acquired in 1930 by Preservation Virginia (formerly known as the Association for the Preservation of Virginia Antiquities). A brick lining and an iron stairway have been added to the interior. The lighthouse is open to the public and a fine view can be enjoyed from its observation platform. It was designated a National Historic Landmark on January 29, 1964. In 2002 the American Society of Civil Engineers designated the lighthouse a National Historic Civil Engineering Landmark.[7][4]

The lighthouses are located in the city of Virginia Beach within the boundaries of Fort Story, an Army base. The Cape Henry Memorial is adjacent to the lighthouses.[4]