Historic districts in the United States

Historic districts in the United States 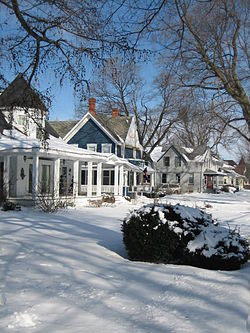 In the United States, a historic district is a group of buildings, properties, or sites that have been designated by one of several entities on different levels as historically or architecturally significant. Buildings, structures, objects and sites within a historic district are normally divided into two categories, contributing and non-contributing. Districts greatly vary in size: some have hundreds of structures, while others have just a few.

The U.S. federal government designates historic districts through the United States Department of Interior under the auspices of the National Park Service. Federally designated historic districts are listed on the National Register of Historic Places (NRHP), but listing on the NRHP imposes no restrictions on what property owners may do with a designated property. State-level historic districts may follow similar criteria (no restrictions) or may require adherence to certain historic rehabilitation standards. Local historic district designation offers, by far, the most legal protection for historic properties because most land use decisions are made at the local level. Local districts are generally administered by the county or municipal government. The tendency of local districts to place restrictions on property owners causes them to be the targets of the most resistance from the public. 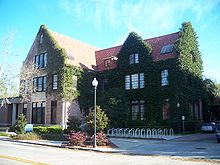 "a geographically definable area, urban or rural, possessing a significant concentration, linkage, or continuity of sites, buildings, structures, or objects united by past events or aesthetically by plan or physical development. A district may also comprise individual elements separated geographically but linked by association or history."[6]

Most U.S. state governments have a listing similar to the National Register of Historic Places. State listings can have similar benefits to federal designation, such as granting qualification and tax incentives. In addition, the property can become protected under specific state laws.[9] The laws can be similar or different from the federal guidelines that govern the National Register. A state listing of a historic district on a "State Register of Historic Places," usually by the State Historic Preservation Office, can be an "honorary status," much like the National Register. For example, in Nevada, listing in the State Register places no limits on property owners.[10] In contrast, state law in Tennessee requires that property owners within historic districts follow a strict set of guidelines, from the U.S. Department of Interior, when altering their properties.[11] Though, according to the National Historic Preservation Act of 1966, all states must have a State Historic Preservation Office, not all states must have a "state historic district" designation. As of 2004, for example, the state of North Carolina had no such designation.[12] 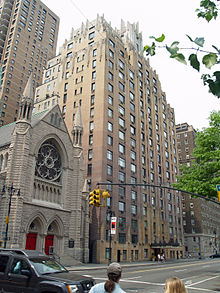 Local historic districts are most likely to generate resistance because of the restrictions they tend to place on property owners.[17][18][19] Local laws can cause residents to "manage … obligations to comply with (local historic district) ordinances."[20] Examples of local preservation laws can be found in Nashville, Tennessee, where the city has adopted the stricter of two sets of criteria.[11] In Nashville, per state and local law, building design criteria for structures that are designated as parts of local "preservation districts" are derived from the U.S. Secretary of Interior's Standards for the Rehabilitation of Historic Buildings. For property owners within these preservation districts to make alterations they must adhere to a set of guidelines which concern roof form and materials, front and side porches (no screens allowed), shape, style and placement of windows and doors, construction materials (no hardboard, masonite, aluminum, or vinyl cladding allowed), lighting fixtures, fences, paving, and paint color (for masonry structures).[11] 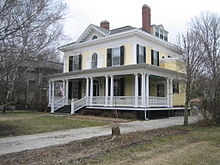 The David Davis III & IV House in Bloomington, Illinois, is another example of a property in a local historic district that is also listed on the federal National Register of Historic Places.[21][22]

The original concept of an American historic district was as a protective area surrounding more important, individual historic sites. As the field of historic preservation progressed, those involved came to realize that the structures acting as "buffer zones" were actually key elements of the historic integrity of larger, landmark sites. Preservationists came to the view that districts should be more encompassing, blending together a mesh of structures, streets, open space and landscaping to define the historical character of a historic district.[23]

As early as 1981 the National Trust for Historic Preservation identified 882 American cities and towns that had some form of "historic district zoning" in place; local laws meant specifically to protect historic districts. Before 1966, historic preservation in the United States was in its infancy. That year the U.S. Conference of Mayors penned an influential report which concluded, in part, that Americans suffered from a sense of "rootlessness."[1] They recommended historic preservation to help provide Americans with a sense of orientation. The creation of the National Register of Historic Places in 1966, on the heels of the report, helped to instill that sense of orientation the mayors were looking for.[1] The mayors also recommended that any historic preservation program not focus solely on individual properties but also on "areas and districts which contain special meaning for the community." Local, state and federal historic districts now account for thousands of historic property listings at all levels of government.[1]