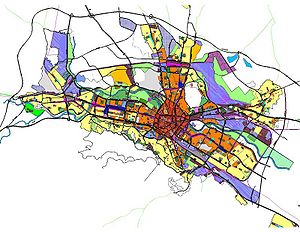 On the Zoning Scheme of the General Spatial Plan for the City of Skopje, different urban zoning is represented by different color.

Zoning is a device of land use planning used by local governments in most developed countries.[1][2][3] The word is derived from the practice of designating permitted uses of land based on mapped zones which separate one set of land uses from another. Zoning may be use-based (regulating the uses to which land may be put), or it may regulate building height, lot coverage, and similar characteristics, or some combination of these. Similar urban planning methods have dictated the use of various areas for particular purposes in many cities from ancient times.

Theoretically, the primary purpose of zoning is to segregate uses that are thought to be incompatible. In practice, zoning is used to prevent new development from interfering with existing residents or businesses and to preserve the "character" of a community. Zoning is commonly controlled by local governments such as counties or municipalities, though the nature of the zoning regime may be determined or limited by state or national planning authorities or through enabling legislation.[4] In Australia, land under the control of the Commonwealth (federal) government is not subject to state planning controls. The United States and other federal countries are similar. Zoning and urban planning in France and Germany are regulated by national or federal codes. In the case of Germany this code includes contents of zoning plans as well as the legal procedure.

Zoning may include regulation of the kinds of activities which will be acceptable on particular lots (such as open space, residential, agricultural, commercial or industrial), the densities at which those activities can be performed (from low-density housing such as single family homes to high-density such as high-rise apartment buildings), the height of buildings, the amount of space structures may occupy, the location of a building on the lot (setbacks), the proportions of the types of space on a lot, such as how much landscaped space, impervious surface, traffic lanes, and parking must be provided. In Germany, zoning usually includes building design, very specific greenspace and compensation regulations. The details of how individual planning systems incorporate zoning into their regulatory regimes varies though the intention is always similar. For example, in the state of Victoria, Australia, land use zones are combined with a system of planning scheme overlays to account for the multiplicity of factors that impact on desirable urban outcomes in any location.

Most zoning systems have a procedure for granting variances (exceptions to the zoning rules), usually because of some perceived hardship caused by the particular nature of the property in question.

Basically, urban zones fall into one of five major categories: residential, mixed residential-commercial, commercial, industrial and special (e. g. power plants, sports complexes, airports, shopping malls etc.). Each category can have a number of sub-categories, for example, within the commercial category there may be separate zones for small-retail, large retail, office use, lodging and others, while industrial may be subdivided into heavy manufacturing, light assembly and warehouse uses. In Germany, e. g., each category has a designated limit for noise emissions (not part of the building code, but federal emissions code). In the United States or Canada, for example, residential zones can have the following sub-categories:

Conditional zoning allows for increased flexibility and permits municipalities to respond to the unique features of a particular land use application. Uses which might be disallowed under current zoning, such as a school or a community center can be permitted via conditional use zoning. 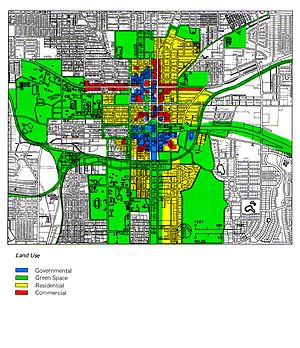 Zoning scheme of the center of Tallahassee, USA.

Under the police power rights state governments may exercise over private real property, special laws and regulations were long made, restricting the places where particular businesses should be carried on. In 1916, New York City adopted the first zoning regulations to apply city-wide as a reaction to The Equitable Building which towered over the neighboring residences, diminishing the availability of sunshine. These laws set the pattern for zoning in the rest of the country. New York City went on to develop ever more complex regulations, including floor-area ratio regulations, air rights and others for specific neighborhoods.

The constitutionality of zoning ordinances was upheld by the U.S. Supreme Court in the 1926 case Village of Euclid, Ohio v. Ambler Realty Co..

Among large populated cities in the United States, Houston is unique in having no zoning ordinances.[5] Rather, land use is regulated by other means.[6]

Zoning types in the United States

Zoning codes have evolved over the years as urban planning theory has changed, legal constraints have fluctuated, and political priorities have shifted. The various approaches to zoning can be divided into four broad categories: Euclidean, Performance, Incentive, and form-based.

Named for the type of zoning code adopted in the town of Euclid, Ohio, and approved in a landmark decision of the U.S. Supreme Court, Village of Euclid, Ohio v. Ambler Realty Co.[7] Euclidean zoning codes are the most prevalent in the United States.[citation needed] Euclidean zoning is characterized by the segregation of land uses into specified geographic districts and dimensional standards stipulating limitations on development activity within each type of district. Advantages include relative effectiveness, ease of implementation, long-established legal precedent, and familiarity. However, Euclidean zoning has received criticism for its lack of flexibility and institutionalization of now-outdated planning theory.

Also known as "effects-based planning", performance zoning uses performance-based or goal-oriented criteria to establish review parameters for proposed development projects. Performance zoning is intended to provide flexibility, rationality, transparency and accountability, avoiding the arbitrariness of the Euclidean approach and better accommodating market principles and private property rights with environmental protection. Difficulties included a requirement for a high level of discretionary activity on the part of the supervising authority. Performance zoning has not been widely adopted in the USA.

First implemented in Chicago and New York City, incentive zoning is intended to provide a reward-based system to encourage development that meets established urban development goals.[8] Typically, the method establishes a base level of limitations and a reward scale to entice developers to incorporate the desired development criteria. Incentive zoning allows a high degree of flexibility, but can be complex to administer.

Form-based codes offer considerably more flexibility in building uses than do Euclidean codes. Form-based zoning regulates not the type of land use, but the form that that land use may take. For instance, form-based zoning in a dense area may insist on low setbacks, high density, and pedestrian accessibility.

Much criticism of zoning laws comes from those who see the restrictions as a violation of property rights. It has been argued that zoning boards and city councils can too easily strip property owners of their right to unencumbered use of their land.

It has also been argued that zoning laws work against economic efficiency and therefore hinder development in a free economy. A poor zoning restriction could hinder the optimal efficient usage of a given area. Even without any zoning restrictions, a landfill, for example, would likely gravitate to cheaper land rather than being placed in a residential area. Also, strict zoning laws can get in the way of creative developments like mixed-use buildings and can even stop harmless activities like yard sales.[9]

In French zoning by income instead of with mixed occupation is called "zonage à l’américaine".[10]

Development control or planning control is the element of the United Kingdom's system of town and country planning through which local government regulates land use and new building. It relies on the "plan-led system" whereby development plans are formed and the public consulted. Subsequent development requires planning permission, which will be granted or refused with reference to the development plan as a material consideration.

There are 421 Local Planning Authorities (LPAs) in the United Kingdom. Generally they are the local borough or district council or a unitary authority. Development involving mining, minerals or waste disposal matters is dealt with by county councils in non-metropolitan areas. Within national parks, it is the national park authority that determines planning applications.

The legal framework for land use zoning in Australia is established by States and Territories, hence each State or Territory has different zoning rules. Land use zones are generally defined at local government level, and most often called Planning Schemes.

Statutory planning otherwise known as town planning, development control or development management, refers to the part of the planning process that is concerned with the regulation and management of changes to land use and development.[11]

The framework for governing land uses in Singapore is administered by the Urban Redevelopment Authority (URA) through the Master Plan.[12] The Master Plan is a statutory document divided into two sections: the plans and the Written Statement. The plans show the land use zoning allowed across Singapore, while the Written Statement provides a written explanation of the zones available and their allowed uses.