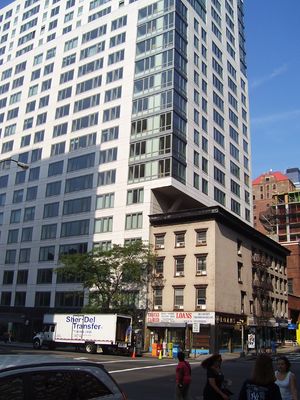 An example of air rights in use: the newly constructed high-rise building extends over the 4-story buildings in Manhattan

Air rights are a type of development right in real estate, referring to the empty space above a property. Generally speaking, owning or renting land or a building gives one the right to use and develop the air rights.

This legal concept is encoded in the Latin phrase Cuius est solum, eius est usque ad caelum et ad inferos ("For whoever owns the soil, it is theirs up to Heaven and down to Hell."), which appears in medieval Roman law and is credited to 13th century glossator Accursius; it was notably popularized in common law in Commentaries on the Laws of England (1766) by William Blackstone; see origins of phrase for details.

Unlimited air rights existed when people began owning real estate. It was not something that anyone really concerned themselves with before the 20th century. The first legal limits placed on air rights came about because of the airplane. Eventually, owners only had rights to airspace that they could reasonably use. It would be impractical for the development of air travel for individual landowners to own all the air above them, because airplanes would be constantly trespassing.

In the United States, the Federal Aviation Administration (FAA) has the sole authority to control all airspace, exclusively determining the rules and requirements for its use. Typically, in the "Uncontrolled" category of airspace, any pilot can fly any aircraft as low as he/she wants, subject to the requirement of maintaining a 500-foot (150 m) distance from people and man-made structures except for purposes of takeoff and landing, and not causing any hazard. Therefore, it appears to trump any individually claimed air rights, near airports especially.

Specifically, the Federal Aviation Act provides that: "The United States Government has exclusive sovereignty of airspace of the United States."[1] The act defines navigable airspace as "airspace above the minimum altitudes of flight…including airspace needed to ensure the safety in the takeoff and landing of aircraft."[2]

Property owners may waive (or purchasers may be required to waive) any putative notion of "air rights" near an airport, for convenience in future real estate transactions, and to avoid lawsuits from future owners who might attempt to claim distress from overflying aircraft. This is called a navigation easement.

From an analysis[which?] by AOPA.org of a lawsuit by a property owner against a nearby small airport: "The landowner's claim raises some fundamental legal principles about the ownership of land and the airspace above the land. These principles have been developing over time. In early common law, when there was little practical use of the upper air over a person's land, the law considered that a landowner owned all of the airspace above their land. That doctrine quickly became obsolete when the airplane came on the scene, along with the realization that each property owner whose land was overflown could demand that aircraft keep out of the landowner's airspace, or exact a price for the use of the airspace. The law, drawing heavily on the law of the sea, then declared that the upper reaches of the airspace were free for the navigation of aircraft. In the case of United States v. Causby,[3] the U.S. Supreme Court declared the navigable airspace to be "a public highway" and within the public domain".[citation needed]

Railroads were the first companies to realize the potential of making money from their air rights. A good example of this is Grand Central Terminal in New York City, where William J. Wilgus, chief engineer of the New York Central and Hudson River Railroad, devised a plan to earn profit from air rights. At first, the railroad simply constructed a platform above the rail yards to allow for the development of buildings overhead. By 1954, the railroad began to realize it could sell more air rights and Grand Central Terminal was proposed to be replaced by a 50-story tower. This is how the MetLife Building came to be built next to the station, after public protest regarding the demolition of Grand Central Terminal.[4]

Building on platforms over railroad tracks is still potentially very profitable, especially in New York City. Recently the Metropolitan Transportation Authority attempted to sell air rights to the New York Jets so that they could build the West Side Stadium over the West Side Yard near Penn Station as part of the Hudson Yards Redevelopment Project. The MTA has even proposed building a platform themselves to encourage development. In Brooklyn, the Barclays Center is proposed to be constructed over the Atlantic Yards.

Similar to railroads, builders of highways have proposed selling their air rights. Boston is currently doing this in connection with the Big Dig.[5]

Transferable development rights (TDR) is a way of controlling land use to complement zoning and strategic planning for more effective urban growth management and land conservation. TDR is as a creative, innovative, and experimental form of development control. It offers landowners financial incentives or bonuses for the conservation and maintenance of the environmental, heritage or agricultural values of their land. TDR is based on the concept that with land ownership comes the right of use of land, or development. These land-based development rights can in some jurisdictions be used, unused, transferred or sold by the owner of a parcel.

TDR Credit Banks can be used to store development rights that have been purchased if there is not yet a receiving area development identified. This mechanism is used when the time of the sale in the sending area is not concurrent with a development in the receiving area. It is also useful in communities that have the opportunity to purchase the rights from an area of high conservation interest but do not have a development that can receive higher density at the time. TDR credit banks should be operated by a third party organization that is empowered to negotiate the sale of development rights such as a non-profit organization or an agency operating within the community.[7]

For example, some counties allow air rights to be transferred to the surrounding buildings. Thus in a dense downtown area, each building in the area may have the right to thirty-five stories of airspace. The owners of an old building of only three stories high could make a great deal of money by selling their building and allowing a thirty-five story skyscraper to be built in its place. To avoid the loss of historically interesting buildings, the government may instead choose to permit developers to purchase the unused air rights of nearby land. In this case, a skyscraper developer may purchase the unused 32 stories of air rights from the owners of the historic building, allowing them to build a skyscraper to a total height of 35 + 32 = 67 stories. This will allow the historic building owners to make almost as much money, if not more, without demolishing their building.

In November 2005, Christ Church in New York sold their air rights for a record $430 per square foot. They made more than $30 million on the sale.[8]