An easement is a certain right to use the real property of another without possessing it.

Easements are helpful for providing pathways across two or more pieces of property or allowing an individual to fish in a privately owned pond. An easement is considered as a property right in itself at common law and is still treated as a type of property in most jurisdictions.

The rights of an easement holder vary substantially among jurisdictions. Historically, the common law courts would enforce only four types of easement:

Easements require the existence of at least two parties. The party gaining the benefit of the easement is the dominant estate (or dominant tenement), while the party granting the burden is the servient estate (or servient tenement).

For example, the owner of parcel A holds an easement to use a driveway on parcel B to gain access to A's house. Here, parcel A is the dominant estate, receiving the benefit, and parcel B is the servient estate, granting the benefit or suffering the burden.

A private easement is held by private individuals or entities. A public easement grants an easement for a public use, for example, to allow the public an access over a parcel owned by an individual.

Appurtenant and in gross easements

A floating easement exists when there is no fixed location, route, method, or limit to the right of way.[1][2][3] For example, a right of way may cross a field, without any visible path, or allow egress through another building for fire safety purposes. A floating easement may be public or private, appurtenant or in gross.[4]

One case defined it as: "(an) easement defined in general terms, without a definite location or description, is called a floating or roving easement...."[5] Furthermore, "a floating easement becomes fixed after construction and cannot thereafter be changed."[6]

Some legal scholars classify structural encroachments as a type of easement.[citation needed]

Easements are most often created by express language in binding documents. Parties generally grant an easement to another, or reserve an easement for themselves. Under most circumstances having a conversation with another party is not sufficient. Courts have also recognized creation of easements in other ways.

An easement may be implied or express. An express easement may be "granted" or "reserved" in a deed or other legal instrument. Alternatively, it may be incorporated by reference to a subdivision plan by "dedication", or in a restrictive covenant in the agreement of an owners association.

Despite the name, necessity alone is an insufficient claim to create any easement. Parcels without access to a public way may have an easement of access over adjacent land if crossing that land is absolutely necessary to reach the landlocked parcel and there has been some original intent to provide the lot with access, but the grant was never completed or recorded but thought to exist. A court order is necessary to determine the existence of an easement by necessity. To obtain this generally the party who claims the easement files a lawsuit and the judge weighs the relative damage caused by enforcing an easement against the servient estate against the damage to the dominant estate if the easement is found not to exist and thus landlocked. Because this method of creating an easement requires imposing a burden (the easement) upon another party for the benefit of the landlocked owner, the court looks to the original circumstances in weighing the relative apportionment of benefit and burden to both lots in making its equitable determination whether such easement shall be created by the court. This method of creating an easement, being an active creation by a court of an otherwise non-existent right, will be automatically extinguished upon termination of the necessity (for example, if a new public road is built adjacent to the landlocked tenement or another easement is acquired without regard to comparison of ease or practicality between the imposed easement and any valid substitute).

As an example, some U.S. state statutes grant a permanent easement of access to any descendant of a person buried in a cemetery on private property.

In some states, such as New York, this type of easement is called an easement of necessity.[7]

Easement by prior use 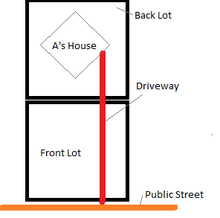 A sells the front lot, but forgets to get an easement for driveway access.

An easement may also be created by prior use. Easements by prior use are based on the idea that land owners can intend to create an easement, but forget to include it in the deed.

There are five elements to establish an easement by prior use:

A originally had common ownership of both properties. A also used the driveway during this period. A then severed the land. Although A did not reserve an easement, the driveway is obviously on the property and a reasonable buyer would know what it is for. Finally, the driveway is reasonably necessary for a residential plot; how else could A get to the street?

Here, there is an implied easement.

Laws and regulations vary among local and national governments, but some traits are common to most prescription laws.

Unlike fee simple adverse possession, prescriptive easements typically do not require exclusivity. In states that do, such as Virginia, the exclusivity requirement has been interpreted to mean that the prescriptive user must use the easement in a way that is different than the general public, i.e. a use that is "exclusive" to that user, Callahan v. White, 238 Va. 10, 381 S.E.2d 1 (1989).

The period of continuous use for a prescriptive easement to become binding is generally between 5 and 30 years depending upon local laws (usually based on the statute of limitations on trespass). Generally, if the true property owner acts to defend his property rights at any time during the required time period the hostile use will end, claims on adverse possession rights are voided, and the continuous use time period resets to zero.

In some jurisdictions, if the use is not hostile but given actual or implied consent by the legal property owner, the prescriptive easement may become a regular or implied easement rather than a prescriptive easement and immediately becomes binding. An example of this is the lengthy Irish Lissadell rights of way case heard in 2010, that extended long-standing consents given to individuals into a public right of way.[8][9]

In other jurisdictions, such permission immediately converts the easement into a terminable license, or restarts the time for obtaining a prescriptive easement.

Prescription may also be used to end an existing legal easement. For example, if a servient tenement holder were to erect a fence blocking a legally deeded right-of-way easement, the dominant tenement holder would have to act to defend his easement rights during the statutory period or the easement might cease to have legal force, even though it would remain a deeded document.

When a property owner misrepresents the existence of an easement while selling a property and does not include an express easement in the deed to the buyer, the court may step in and create an easement. Easements by estoppel generally look to any promises not made in writing, any money spent by the benefiting party in reliance on the representations of the burdened party. If the court finds that the buyer acted in good faith and relied on the seller's promises, the court will create an easement by estoppel.

For example: Ray sells land to Joe on the promise that Joe can use Ray's driveway and bridge to the main road at anytime, but Ray does not include the easement in the deed to the land. Joe, deciding that the land is now worth the price, builds a house and connects a garage to Ray's driveway. If Ray (or his successors) later decides to gate off the driveway and prevents Joe (or Joe's successors) from accessing the driveway, a court would likely find an easement by estoppel.

Because Joe purchased the land assuming that there would be access to the bridge and the driveway and Joe then paid for a house and a connection, Joe can be said to rely on Ray's promise of an easement. Ray materially misrepresented the facts to Joe. In order to preserve equity, the court will likely find an easement by estoppel.

Easement by the government

In the United States, easements may be acquired by the government using its power of "eminent domain" in a "condemnation" proceeding in the courts. Note that in the U.S., in accordance with the Fifth Amendment to the U.S. Constitution, property cannot simply be taken by the government unless the property owner is compensated for the fair market value of what is taken. This is true whether the government acquires full ownership of the property ("fee title") or a lesser property interest, such as an easement.

In the law of England and Wales following the incorporation of the European Convention on Human Rights into English law, any deprivation of the rights of the owner of property must be "in accordance with law" as well as "necessary in a democratic society" and "proportionate".

Licenses to use property in a non-possessory manner are very similar to easements and are, under certain circumstances, transformed into easements by the court, but some general differences do exist:

Easements are regarded as a more powerful type of license, and a license that has any of the properties of an easement may be bound by the higher standards for termination granted by an easement.

A party claiming termination should show one or more of the following factors:

The following rights are recognized of an easement:

Blocking access to someone who has an easement is a trespass upon the right of easement and creates a cause of action for civil suit. For example, putting up a fence across a long-used public path through private property may be a trespass and a court may order the obstacle removed. Turning off the water supply to a downhill neighbor may similarly trespass on the neighbor's water easement.

Open and continuous trespassing upon an easement can lead to the extinguishment of an easement by prescription (see above), if no action is taken to cure the limitation over an extended period.