Commentaries on the Laws of England

Commentaries on the Laws of England 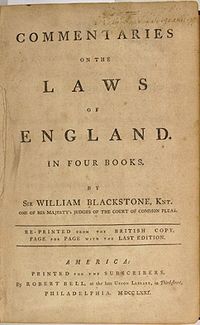 Title page of a 1771 American printing of Commentaries on the Laws of England by William Blackstone.

The Commentaries on the Laws of England [1] are an influential 18th-century treatise on the common law of England by Sir William Blackstone, originally published by the Clarendon Press at Oxford, 1765–1769. The work is divided into four volumes, on the rights of persons, the rights of things, of private wrongs and of public wrongs.

The Commentaries were long regarded as the leading work on the development of English law and played a role in the development of the American legal system. They were in fact the first methodical treatise on the common law suitable for a lay readership since at least the Middle Ages. The common law of England has relied on precedent more than statute and codifications and has been far less amenable than the civil law, developed from the Roman law, to the needs of a treatise. The Commentaries were influential largely because they were in fact readable, and because they met a need. The work is as much an apologia for the legal system of the time as it is an explanation; even when the law was obscure, Blackstone sought to make it seem rational, just, and inevitable that things should be how they were.

The Commentaries are often quoted as the definitive pre-Revolutionary source of common law by United States courts. Opinions of the Supreme Court of the United States quotes from Blackstone's work whenever they wish to engage in historical discussion that goes back that far, or farther (for example, when discussing the intent of the Framers of the Constitution). The book was famously used as the key in Benedict Arnold's book cipher, which he used to communicate secretly with his conspirator John André during their plot to betray the Continental Army during the American Revolution.

Sir William Blackstone as illustrated in his Commentaries on the Laws of England.

The Rights of Persons

The Rights of Persons is by and large concerned with the relations of status in the English social structure, from the King of England and the aristocracy down to the untitled commoners. Also dealt here were common relationships such as that of husband and wife, master and servant (in modern day terminology, employer and employee), and guardian and ward.

The Rights of Things

The Rights of Things, Blackstone's longest volume, deals with property. The vast majority of the text treats of real property, this being the most valuable sort in the feudal law upon which the English law of land was founded. Property in chattels was already beginning to overshadow property in land, but its law lacked the complex feudal background of the common law of land, and was not dealt with by Blackstone at anywhere near the space he devoted to land.

Of Private Wrongs dealt with torts as they existed in Blackstone's time. The various methods of trial that existed at civil law were also dealt with in this volume, as were the jurisdictions of the several courts, from the lowest to the highest. Blackstone also adds a brief chapter on equity, the parallel legal system that existed in English law at the time, seeking to address wrongs that the common law did not handle; the chapter on equity seems almost an afterthought.

Of Public Wrongs is Blackstone's treatise on criminal law. Here, Blackstone the apologist takes centre stage; he seeks to explain how the criminal laws of England were just and merciful, despite becoming later known as the Bloody Code for their severity. He does however accept that "It is a melancholy truth, that among the variety of actions which men are daily liable to commit, no less than an hundred and sixty have been declared by Act of Parliament to be felonious without benefit of clergy; or, in other words, to be worthy of instant death". Blackstone frequently had to resort to the devices of assuring his reader that the laws as written were not actually enforced, and that the King's power of pardon existed to correct any hardships or injustices.

Blackstone for the first time made the common law readable and understandable by non-lawyers. At first, his Commentaries were hotly contested, some seeing in it an evil or covert attempt to reduce or codify the common law which was anathema to common law purists.

For decades, a study of the Commentaries was required reading for all first year law students. Lord Avonmore said of Blackstone: "He it was who first gave to the law the air of a science. He found it a skeleton and clothed it with life, colour and complexion. He embraced the cold statue and by his touch, it grew into youth, health and beauty." Jeremy Bentham, who had been a critic of the Commentaries when it was first published, credits Blackstone with having: "... taught jurisprudence to speak the language of the scholar and the gentleman; put a polish upon that rugged science, cleansed her from the dust and cobwebs of the office and, if he has not enriched her with that precision which is drawn only from the sterling treasury of the sciences, has decked her out to advantage from the toilet of classical erudition, enlivened her with metaphors and allusions and sent her abroad in some measure to instruct."[2]

While there is much valuable historical information in the Commentaries, later historians have tended to be somewhat critical of the uses Blackstone made of history. There is a lot of what would later be called "Whig history" in the Commentaries; the easy and contradictory assurance that England's current political settlement represented the optimal state of rational and just government, while claiming simultaneously that this optimal state was an ideal that had always existed in the past, despite the many struggles in England's actual history between overreaching kings and wayward Parliaments.

But Blackstone's chief contribution was to create a succinct, readable, and above all handy epitome of the common law tradition. While useful in England, Blackstone's text answered an urgent need in the developing United States and Canada. In the United States, the common law tradition was being spread into frontier areas, but it was not feasible for lawyers and judges to carry around the large libraries that contained the common law precedents. The four volumes of Blackstone put the gist of that tradition in portable form. They were required reading for most lawyers in the Colonies, and for many, they were the only reading. Blackstone's Whiggish but conservative vision of English law as a force to protect people, their liberty, and their property, had a deep impact on the ideologies that were cited in support of the American Revolution, and ultimately, the United States Constitution.

Two decades after its publication, Blackstone's Commentaries were the focus of a mocking polemic by Jeremy Bentham, called Fragment on Government (1776). This dissection of Blackstone's first book made Bentham's name notorious, though it was originally published anonymously.

2. The Twelfth Edition (with portraits of the judges), with the last corrections of the author and with notes and additions by Edward Christian, Esq., Barrister at Law and Professor of the Laws of England in the University of Cambridge, London, 1793–1795. 4 vols., 8vo.

3. Blackstone’s Commentaries : with notes of reference, to the Constitution and laws, of the federal government of the United States, and of the Commonwealth of Virginia : in five volumes, with an appendix to each volume, containing short tracts upon such subjects as appeared necessary to form a connected view of the laws of Virginia, as a member of the federal union / by St. George Tucker.

6. The Eighteenth Edition, with notes by J. Chitty, London, 1826 (often reprinted in America).

7. Commentaries on the laws of England : in four books / by Sir William Blackstone ... ; together with such notes of enduring value as have been published in the several English editions ; and also, a copious analysis of the contents ; and additional notes with references to English and American decisions and statutes, to date, which illustrate or change the law of the text ; also a full table of abbreviations and some considerations regarding the study of the law, by Thomas M. Cooley. Published: Chicago: Callaghan and Co., 1871, Second Edition 1876, Third Edition 1884, Fourth Edition edited by James DeWitt Andrews 1899.

8. Commentaries on the laws of England / by Sir William Blackstone, KT. Edition Information: From the author’s 8th ed., 1778 / edited for American lawyers by William G. Hammond ; with copious notes, and references to all comments on the text in the American reports, 1787–1890. Published: San Francisco : Bancroft–Whitney Company, 1890. Description: 4 vols.

9. Commentaries on the Laws of England in Four Books / by Sir William Blackstone. Notes selected from the editions of Archibold, Christian, Coleridge, Chitty, Stewart, Kerr, and others, Barron Field’s Analysis, and Additional Notes, and a Life of the Author by George Sharswood. In Two Volumes. (Philadelphia: J.B. Lippincott Co., 1893).

10. Commentaries on the laws of England : in four books / by Sir William Blackstone ; with notes selected from the editions of Archbold, Christian, Coleridge, Chitty, Stewart, Kerr, and others ; and in addition, notes and references to all text books and decisions wherein the Commentaries have been cited, and all statutes modifying the text by William Draper Lewis. Published: Philadelphia : Rees Welsh and Company, 1897. Description: 4 vols.