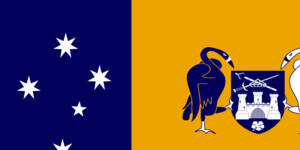 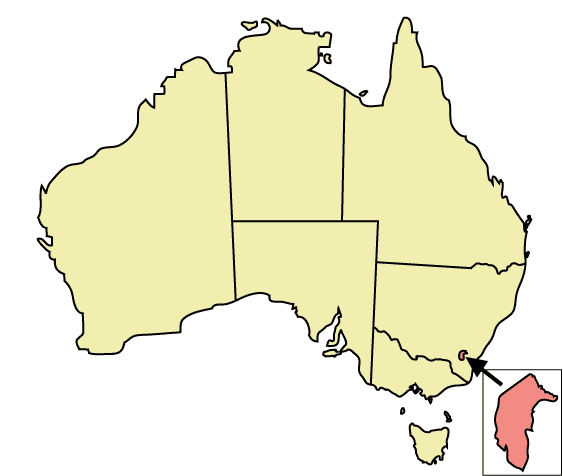 The Australian Capital Territory (ACT) is the of the Commonwealth of Australia and its smallest self-governing internal territory. It is an inland in , situated in bushland.

The ACT was conceived during the Federation conventions of the late 19th century as a neutral location for a new national capital. Section 125 of the Australian Constitution provided that following Federation in 1901, land would be ceded freely to the new Federal Government. The territory was transferred to the Commonwealth by the state of New South Wales in 1911, and construction of the capital, , began in 1913.

The floral emblem of the ACT is the Royal Bluebell and the faunal emblem is the .

Before European settlement the area now known as the ACT was inhabited by three Aboriginal tribes: the Ngunnawal, , and .

White exploration and settlement did not occur until the 1820s. From 1824 onwards, settlements and homesteads, and ultimately some small townships such as Hall and Tharwa, were established in the area.

One homestead of special historical interest was Lambrigg, near Tharwa. This was the place in which developed the rust-resistant Federation strain that had a major beneficial effect on Australia's wheat industry.

When the constitution for the was being negotiated between the colonies, a point of contention between the colonies was the location of the national capital, with both and claiming the right to be the capital. A compromise was reached whereby a separate capital city would be created in New South Wales, provided it was no closer than convert|100|mi|km to Sydney. Until such time as the new city was established, Melbourne was to be the temporary capital of Australia.

The present site was chosen in 1908, [ [http://www.foundingdocs.gov.au/item.asp?dID=110 National Archives of Australia - Seat of Government Act 1908 (Cth)] ] with additional territory at Jervis Bay (now a naval base on the New South Wales coast) allocated so the national capital could have a seaport. In 1909 New South Wales transferred the land for the territory to federal control and in 1910 an act of parliament created the legal framework for the Federal Capital Territory (FCT). [ [http://www.foundingdocs.gov.au/item.asp?sdID=93 National Archives of Australia - Seat of Government Acceptance Act 1909 (Cth)] ] [ [http://www.foundingdocs.gov.au/item.asp?dID=111 National Archives of Australia - Seat of Government (Administration) Act 1910 (Cth)] ] The Minister for Home Affairs, , who had charge of the creating the FCT, also proposed a bill making it an alcohol-free area. With his strong support, the bill became law later that year, though it was shortly thereafter repealed. O'Malley also pushed for a form of land tenure that restricted land holders to , rather than freehold, on the basis that this would stop land speculation and give the national government, as the lessor, more control over development. This too was adopted by the national Parliament. (As of 2006 all land in the ACT is held on 99 year crown leases.)

In 1911 Colonel David Miller, the Secretary of the Department of Home Affairs, had the idea for an international competition "to obtain the very best design of the most modern lines for this city". The winner was American architect .

The seat of the Federal Government officially moved to the FCT from Melbourne on the formal opening of the Provisional Parliament House on 9 May 1927. Among the first acts passed by the parliament in its new location was the repealing of the . At first the public service continued to be based in , but the various departments were gradually moved to over many years.

In a 1978 , Canberrans rejected self-government by 63% of the vote. [ [http://www.parliament.curriculum.edu.au/act.php3 Parliament@Work - At a Glance Australian Capital Territory] ] Despite this, in December 1988, the ACT was granted full self-government through an Act of the Commonwealth Parliament that made the ACT a body politic under the crown. [ [http://www.foundingdocs.gov.au/item.asp?dID=118 National Archives of Australia - Australian Capital Territory (Self-Government) Act 1988 (Cth)] ] Following the first elections in February 1989, a 17-member Legislative Assembly sat at its offices in London Circuit, Civic, on May 11, 1989. The formed the ACT's first government, led by the Chief Minister , who made history as Australia's first female head of government.

Apart from the city of Canberra, the Australian Capital Territory also contains agricultural land (sheep, , s and small amounts of crops) and a large area of national park (), much of it mountainous and forested. Small townships and communities located within the ACT include Williamsdale, Naas, Uriarra, Tharwa and Hall.

Tidbinbilla is a locality to the south-west of Canberra that features the and the , operated by the United States’ as part of its .

There are a large range of mountains, rivers and creeks in the Namadgi National Park. These include the Naas and Murrumbidgee Rivers.

In 1915 the "" created the as an annexe to the Australian Capital Territory. In 1988, when the ACT gained self-government, Jervis Bay became a separate territory administered by the Minister for Territories.

Because of its elevation (650 m) and distance from the coast, the Australian Capital Territory experiences four distinct seasons, unlike many other Australian cities whose climates are moderated by the sea. Canberra is notorious for hot, dry summers, and cold winters with occasional and frequent s. Many of the higher mountains in the territory’s south-west are snow-covered for at least part of the winter. s can occur between October and March, and annual rainfall is 623 s (24.5 in), with rainfall highest in spring and summer and lowest in winter.

In the 1840s s of s and s from the period were discovered at Woolshed Creek near Duntroon. At the time, these were the oldest fossils discovered in Australia, though this record has now been far surpassed. [ [http://www.environment.act.gov.au/Files/heritageregister20010.pdf ACT Heritage Register — Woolshed Creek Fossil Site] ] Other specific geological places of interest include the State Circle cutting and the Deakin anticline. [ [http://www.deh.gov.au/cgi-bin/ahdb/search.pl?mode=place_detail;place_id=105733 Australian Heritage Database — State Circle Cutting] ] [ [http://www.act.nationaltrust.org.au/places/deak-anti.html National Trust of Australia — Deakin Anticline] ]

The oldest rocks in the ACT date from the around 480 million years ago. During this period the region along with most of Eastern Australia was part of the ocean floor; formations from this period include the "Black Mountain Sandstone" formation and the "Pittman Formation" consisting largely of -rich , and . These formations became exposed when the ocean floor was raised by a major volcanic activity in the forming much of the east coast of Australia.

The ACT has internal self-government, but it does not have the full legislative independence of the Australian states. It is governed by a Ministry headed by a Chief Minister (currently , ). Laws are made in a 17-member Legislative Assembly that has all state and local government functions. However, its decisions can be overruled by the Australian Governor-General (effectively the national government) under section 35 of the Australian Capital Territory (Self-Government) Act 1988. (See also ). The ACT Government is a member of the .

Unlike other self-governing Australian territories (e.g. , ), the ACT does not have an Administrator. The Crown is represented by the in the government of the ACT. The Chief Minister performs many of the roles that a state governor normally holds in the context of a state, however the Speaker of the Legislative Assembly gazettes the laws and summons meetings of the Assembly.

In Australia's Federal Parliament, the ACT is represented by four federal members: two members of the House of Representatives; the and the and is one of only two territories to be represented in the Senate with two Senators. The Member for Fraser and the ACT Senators also represent the (small number of) voters from the .

Almost all educational institutions in the Australian Capital Territory are located within . The ACT public education system schooling is normally split up into , (K-6), (7-10) and College (11-12) followed by studies at or . Many private high schools include years 11 and 12 and are referred to as colleges. Children are required to attend school until they turn 15 years old, most finish year 10 (around 16 years old).

As of May 2004, 30% of people in the ACT aged 15&ndash;64 had a level of educational attainment equal to at least an , significantly higher that the national average of 19%. [Australian Bureau of Statistics. 2005. [http://www.abs.gov.au/ausstats/abs@.nsf/94713ad445ff1425ca25682000192af2/71bcf1841bfa37f9ca256f84007c28f5!OpenDocument Education in the ACT] ] The two main tertiary institutions are the (ANU) in Acton and the (UC) in Bruce. There are also two religious university campuses in Canberra: Signadou is a campus of the and St Mark's Theological College is a campus of . The offers degree and diploma level courses and operates the in Barton. Tertiary level vocational education is also available through the multi-campus .

The (ADFA) and the (RMC) are in the suburb of Campbell in Canberra's inner northeast. ADFA teaches s and postgraduates and is officially a of the while Duntroon provides Officer .

States and territories of Australia