Coordinates: 23°0′S 143°0′E﻿ / ﻿23°S 143°E﻿ / -23; 143 Queensland (abbreviated as QLD) is a state of Australia, occupying the north-eastern section of the mainland continent. It is bordered by the Northern Territory, South Australia and New South Wales to the west, south-west and south respectively. To the east, Queensland is bordered by the Coral Sea and Pacific Ocean. The state is Australia's second largest by area, following Western Australia, and the country's third most populous after New South Wales and Victoria. The capital and largest city in the state is Brisbane.

Queensland was first occupied by Indigenous Australians and Torres Strait Islanders, who arrived between 40,000 and 65,000 years ago, according to various dating methods.[3] Queensland was made a British Crown Colony that was separated from New South Wales on 6 June 1859, a date now celebrated state-wide as Queensland Day.

Queensland is often referred to as Australia's Sunshine State. Queensland' current Premier is Anna Bligh of the Australian Labor Party.

The state was named in honour of Queen Victoria,[4] who on 6 June 1859 signed Letters Patent separating the colony from New South Wales. At the time, Queen Victoria was a generally popular monarch, and she preferred an eponymous name for the new colony over Cooksland, which had been suggested by the influential local Presbyterian minister John Dunmore Lang in honour of English navigator James Cook.[5][6]

The history of Queensland spans thousands of years, encompassing both a lengthy indigenous presence, as well as the eventful times of post-European settlement. Estimated to have been settled by Indigenous Australians approximately 40,000 years ago, the north-eastern Australian region was explored by Dutch, Portuguese and French navigators before being encountered by Captain James Cook in 1770. The Australian Labor Party has its origin as a formal organisation in Queensland and the town of Barcaldine is the symbolic birthplace of the party.[7] The state has witnessed frontier warfare between European settlers and Indigenous inhabitants, as well as the employment of cheap Kanaka labour sourced from the South Pacific. June 2009 marked the 150 anniversary of its creation as a separate colony from New South Wales.[8] A rare record of early settler life in north Queensland can be seen in a set of ten photographic glass plates taken in the 1860s by Richard Daintree, in the collection of the National Museum of Australia.[9] 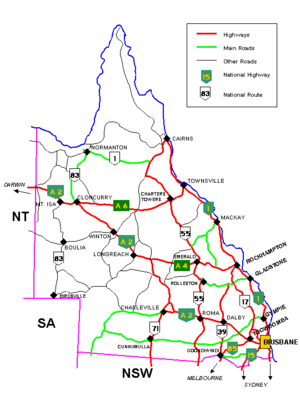 In the south, there are three sections that comprise its border: the watershed from Point Danger to the Dumaresq River; the river section involving the Dumaresq, the MacIntyre and the Barwon; and 29°S latitude (including some minor historical encroachments below the 29th parallel) over to the South Australian border.

The state capital is Brisbane, located on the coast 100 kilometres (60 mi) by road north of the New South Wales border. The state is divided into several officially recognised regions. Other smaller geographical regions of note include the Atherton Tablelands, the Granite Belt, and the Channel Country in the far south-west.

Queensland has many places of natural beauty, including: the Sunshine Coast and the Gold Coast having some of the state's most popular beaches; the Bunya Mountains and the Great Dividing Range with numerous lookouts, waterfalls and picnic areas; Carnarvon Gorge; Whitsunday Islands and Hinchinbrook Island.

Because of its size, there is significant variation in climate across the state. Low rainfall and hot summers are typical for the inland west, a monsoonal 'wet' season in the far north, and warm temperate conditions along the coastal strip. Inland and in southern ranges low minimum temperatures are experienced. The climate of the coastal strip is influenced by warm ocean waters, keeping the region free from extremes of temperature and providing moisture for rainfall.[10]

There are five predominate climatic zones in Queensland,[11] based on temperature and humidity:

The annual mean statistics[12] for some Queensland centres is shown below:

The highest maximum temperature observed in the state is 49.5 °C (121 °F) at Birdsville on 24 December 1972 (The temperature of 53.1 °C (128 °F) at Cloncurry on 16 January 1889 is not considered reliable; the figure quoted from Birdsville is the next highest, so that record is considered as being official).

Queensland has a less centralised population than other states, with significant populations in regional cities such as Townsville (above).

On 9 December 2005, the population of Queensland officially reached 4 million. According to Queensland's Office of Economic and Statistical Research the estimated population of the state at the end of 2007 was 4,228,290 which is almost 20% of Australia's total. For many years until 2008, Queensland was the fastest growing state in Australia. At its peak growth in 2007, it was estimated that over 1,500 people moved to the state per week including 1,000 to the southern part of the state alone and the state recorded a TFR of 2.1, the highest since 1977.[20] Queensland's growth rate has since been surpassed by Western Australia[21]). 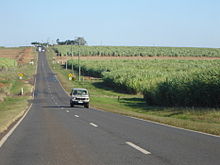 Queensland's economy has enjoyed a boom in the tourism and mining industries over the past 20 years. A sizeable influx of interstate and overseas migrants, large amounts of federal government investment, increased mining of vast mineral deposits and an expanding aerospace sector have contributed to the state's economic growth. The 2008–09 saw the expansion slow to just 0.8% the state's worst performance in 18 years.[23]

Between 1992 and 2002, the growth in the Gross State Product of Queensland outperformed that of all the other states and territories. In that period Queensland's GSP grew 5.0% each year, while growth in Australia's Gross Domestic Product (GDP) rose on average 3.9% each year. Queensland's contribution to the Australian GDP increased by 10.4% in that period, one of only three states to do so.[24]

In 2003 Brisbane had the lowest cost of living of all Australia's capital cities. In late 2005 Brisbane was the third most expensive capital for housing after Sydney and Canberra and just ahead of Melbourne by $15,000.

Primary industries include: bananas, pineapples, peanuts, a wide variety of other tropical and temperate fruit and vegetables, grain crops, wineries, cattle raising, cotton, sugar cane, wool and a mining industry including bauxite, coal, silver, lead, zinc, gold, and copper. Secondary industries are mostly further processing of the above-mentioned primary produce. For example, bauxite is shipped by sea from Weipa and converted to alumina at Gladstone.[25] There is also copper refining and the refining of sugar cane to sugar at a number of mills along the eastern coastline. Major tertiary industries are the retail trade and tourism. 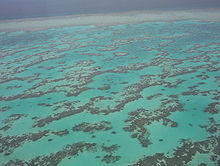 Part of the Great Barrier Reef, seen from a helicopter. 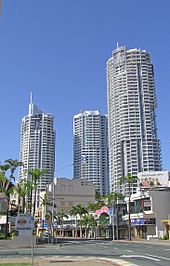 The Gold Coast is a major Tourist city.

Tourism is Queensland's leading tertiary industry with millions of interstate and overseas visitors flocking to the Sunshine State each year. The industry generates $4.0 billion annually, accounting for 4.5% of Queensland's GSP.[26] Queensland is a state of many landscapes that range from sunny tropical coastal areas, lush rainforests to dry inland areas. 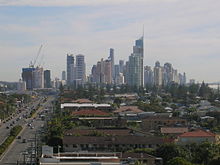 There are numerous wildlife parks in Queensland. On the Gold Coast there is Currumbin Wildlife Sanctuary at Currumbin and David Fleay Wildlife Park at Burleigh Heads. On the Sunshine Coast there is UnderWater World at Mooloolaba and Australia Zoo near Beerwah/Glass House Mountains, home of Steve Irwin until his death in 2006.

Lone Pine Koala Sanctuary at Fig Tree Pocket and Brisbane Forest Park at The Gap are located in Brisbane. North of Brisbane is Alma Park Zoo which is relocating to Logan City and Kumbartcho Wildlife Sanctuary which was originally called Bunya Park Wildlife Sanctuary. 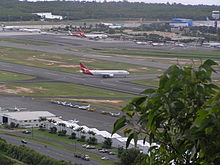 Queensland is served by a number of National Highways and, particularly in South East Queensland, high quality motorways such as the M1.

Principal rail services are provided by Queensland Rail and Pacific National, predominantly along the coamajor ports including the Port of Brisbane and subsidiary ports at Gladstone and Townsville.

The Parliament House in Brisbane.

Executive authority is vested in the Governor, who represents and is appointed by Elizabeth II on the advice of the Premier. The current governor is Ms. Penelope Wensley, AO. The head of government is the Premier, who is appointed by the Governor but must have the support of the Legislative Assembly. The current Premier is Anna Bligh, of the Australian Labor Party. Other ministers, forming the Executive Council, are appointed by the governor from among the members of the Legislative Assembly on the Premier's recommendation.

The Queensland Parliament or the Legislative Assembly, is unicameral. It is the only Australian state with a unicameral legislature. A bicameral system existed until 1922, when the Legislative Council was abolished by the Labor members' "suicide squad" so called because they were appointed for the purpose of voting to abolish their own offices.[28] The Parliament is housed in the 19th century Parliament House and 20th century Parliamentary Annexe in Brisbane.

In 2001 Queensland adopted a new codified constitution, repealing most of the assorted Acts of Parliament that had previously made up the constitution. The new constitution took effect on 6 June 2002, the anniversary of the formation of the colony of Queensland by the signing of Letters Patent by Queen Victoria in 1859.

Local government is the mechanism by which towns and districts can manage their own affairs to the extent permitted by the Local Government Act 1993–2007. Queensland is divided into 73 local government areas which may be called Cities, Towns, Shires or Regions.[29]

Each area has a council which is responsible for providing a range of public services and utilities, and derives its income from both rates and charges on resident ratepayers, and grants and subsidies from the State and Commonwealth governments.[30] 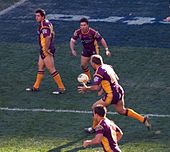 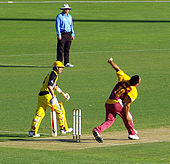 The state of Queensland is represented in all of Australia's national sporting competitions and is also host to a number of domestic and international sporting events. The most popular winter and summer team sports are Rugby league, Rugby union and cricket, respectively. The annual rugby league State of Origin series is a major event in the Queensland sporting calendar, with the Queensland Maroons in 2011 winning a record sixth series in a row. The Brisbane Broncos are the state's most successful team of any sport, having won 3 premierships in the NRL rugby league era and 6 in total during their 23 year existence.

Swimming is also a popular sport in Queensland, with a majority of Australian team members and international medalists hailing from the state. At the 2008 Summer Olympics, Queensland swimmers won all six of Australia's gold medals, all swimmers on Australia's three female (finals) relays teams were from Queensland, two of which won gold.