Citytrain is the brand name of urban, suburban and inter-urban electric passenger railway services in South East Queensland, Australia. Its network, centering in Brisbane, the state capital of Queensland, is approximately 382 km (237 mi) in route length.[1] Corporately, Citytrain is a part of Queensland Rail

The first railway in Queensland did not actually run to Brisbane, but ran from Ipswich to Grandchester. Opened in July 1865,[2] the line into Brisbane was not completed until the opening of the Albert Bridge in July 1875.[3]

A start on electrification of the suburban network was approved in 1950 but a change of state government in 1957 saw the scheme abandoned in 1959.[4] It was not until the 1970s that electrification was again brought up, with contracts let in 1975.[5] The first part of the new electric system, the Darra - Ferny Grove line, was opened to the public on November 17, 1979.[6][7] The network was completed by 1988, with a number of extensions made since and additional rolling stock purchased. Services were initially operated under the Queensland Rail brand, with the Citytrain name established in the 1990s.

Services that goes from Brisbane to surrounding shires. All stops services operates on all lines during off-peak except Gold Coast and Sunshine Coast lines. Most lines have express services during peak hours except Doomben line.

Services that go to Gold Coast/Sunshine Coast from Brisbane.

For more details on this topic, see Rail network in South East Queensland.

Citytrain operates ten suburban lines and three interurban lines. Centering in the Brisbane City, it extends as far as Gympie in the north, Varsity Lakes in the south, Rosewood in the west, and Cleveland in the east to Moreton Bay.[8] 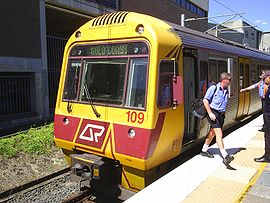 All of Citytrain's rolling stock is electric, air-conditioned, were constructed locally in Maryborough, and are no older than thirty-two years: 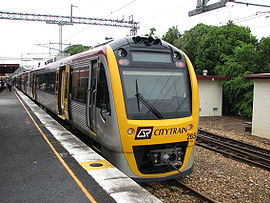 All trains are electric multiple units with a driver cabin at both ends, with the exceptions of EM60 through to EM79 having only one cab at one end. All are configured with three cars, except for the ICE sets that are usually configured with four, five or six cars.

Due to increasing demands, suburban trains may be scheduled on interurban lines. The Sunshine Coast line frequently suffers the use of suburban rolling stock on some services, sometimes substituting for a ICE or IMU set. The Gold Coast line, predominately serviced by IMU trains, also may have some services operated by suburban sets.

While using suburban trains on interurban lines increases operational flexibility, the trains are not provided with the creature comforts of the IMU or ICE sets, such as toilets or high-backed seats.

This predicament will be remedied somewhat with an order of 16 new interurban and eight new suburban sets being progressively delivered since early 2007. On top of this, and additional 20 three-car sets (14 SMU sets and six IMU sets), and order for an additional 58 three-car sets was made in the Queensland budget for 2008–09.

Free Wi-Fi Internet Access will be progressively installed in all of the new 64 Trains, starting October 2011.

This move will also Increase the Safety Level on the new Trains, as Centre Control and Police can view up to the second video images, to deal with Crimes or Emergencies that occur.

If the Roll out goes to plan, then Free Wi-Fi Internet Access will be installed in Older Trains.

The Wi-Fi usage is limited to 20MB.