Cleveland is a suburb located approximately 25 kilometres (16 mi) east-south-east of Brisbane, the capital of the Australian state of Queensland, and is the council seat for the Redland City local government area. It comprises commercial, residential and industrial areas. 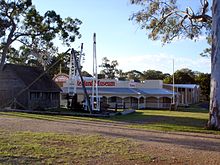 The Redlands Museum, viewed from the Cleveland Showgrounds

Major features of Cleveland include;

Major access to Cleveland is provided by Finucane Road and Bloomfield Street, or the QR Citytrain line which terminates in Cleveland. 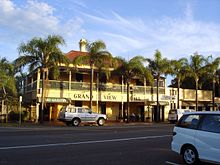 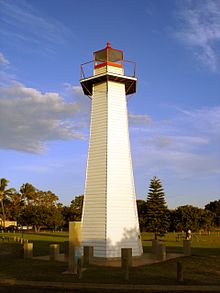 There are conflicting reports as to the naming of Cleveland; it was either named in 1770 by Captain James Cook in honour of John Clevland, the Secretary of the Admiralty around the time,[2] or by surveyors in the 1840s, in honour of William Vane, 1st Duke of Cleveland.[3]

European settlement of Brisbane and surrounding areas was banned from 1824 until 1842, due to the Moreton Bay Penal Settlement, but the area to become Cleveland was first surveyed in 1840, and in 1841, was recommended for a maritime or seaport township. In 1847, the government planned for the new town, and on the 13th of December, 1850, Cleveland was proclaimed a township.[4] The first land sales of the new township took place a year later, with early purchases primarily around Cleveland Point, at the time an early candidate for a major port to replace Brisbane. Brisbane was troubled by sand bars across the mouth of the river, and Cleveland Point was closer to the southern passage (the entrance to Moreton Bay between North Stradbroke Island and Moreton Island). However, when Governor Sir George Gipps visited Cleveland Point, it is reported that upon disembarking his boat, he immediately sank into the mudflats up to his waist. He was so annoyed by this that he changed his mind and suggested Ipswich.[2] A series of wrecking in the southern passage led to ships using the longer but safer northern entrance between Bribie and Moreton islands. This, and an unfortunate fire at the Cleveland jetty, removed any hopes for Cleveland.

In 1852, the first large buildings were built in Cleveland; what is now the Grand View Hotel, and the Old Courthouse, at the time a workers cottage. Farms sprang up; a brickworks was built at the point, and a wool store to handle shipping. The first mail service to Cleveland began in 1861, with the first school established at the same time. The wool store, unused because of Cleveland's failure as a port, was converted into a sawmill, which supplied timber to a shipyard built at the point. The population at this time was only 270.[4] Tourism blossomed with the arrival of the first regular steamer service to Cleveland in 1864. The Cleveland Point Light was also constructed in 1864, and was only replaced in 1969.[2] From this time, the most popular crop was sugar cane, until it was replaced by the popularity of fruits such as passion fruit and strawberries. A rail line to Cleveland was completed in 1889, and with it tourism, residential subdivisions and farming further grew in the area.[3]

The rail line continued further than it does today, terminating at Cleveland Point - the existing Cleveland station was constructed later, for passenger use. The Redlands attracted farming families and became a district known for producing top quality fruits and vegetables with crops of strawberries, tomatoes, pineapples, custard apples, citrus fruits, bananas, herbs and vegetables grown very successfully. By the outbreak of World War I, the population in Cleveland had hit 540. However, in 1960, lack of demand ended the rail service to Cleveland, and it was only restored twenty years later, by which time the population of Cleveland was over 5000. The completion of the Leslie Harrison Dam allowed town water to be connected to the shire, with the majority of the town being serviced by 1970. The Raby Bay canal estate was completed in 1984, and by 1992, the population of Cleveland was nearing 10,000.[4]