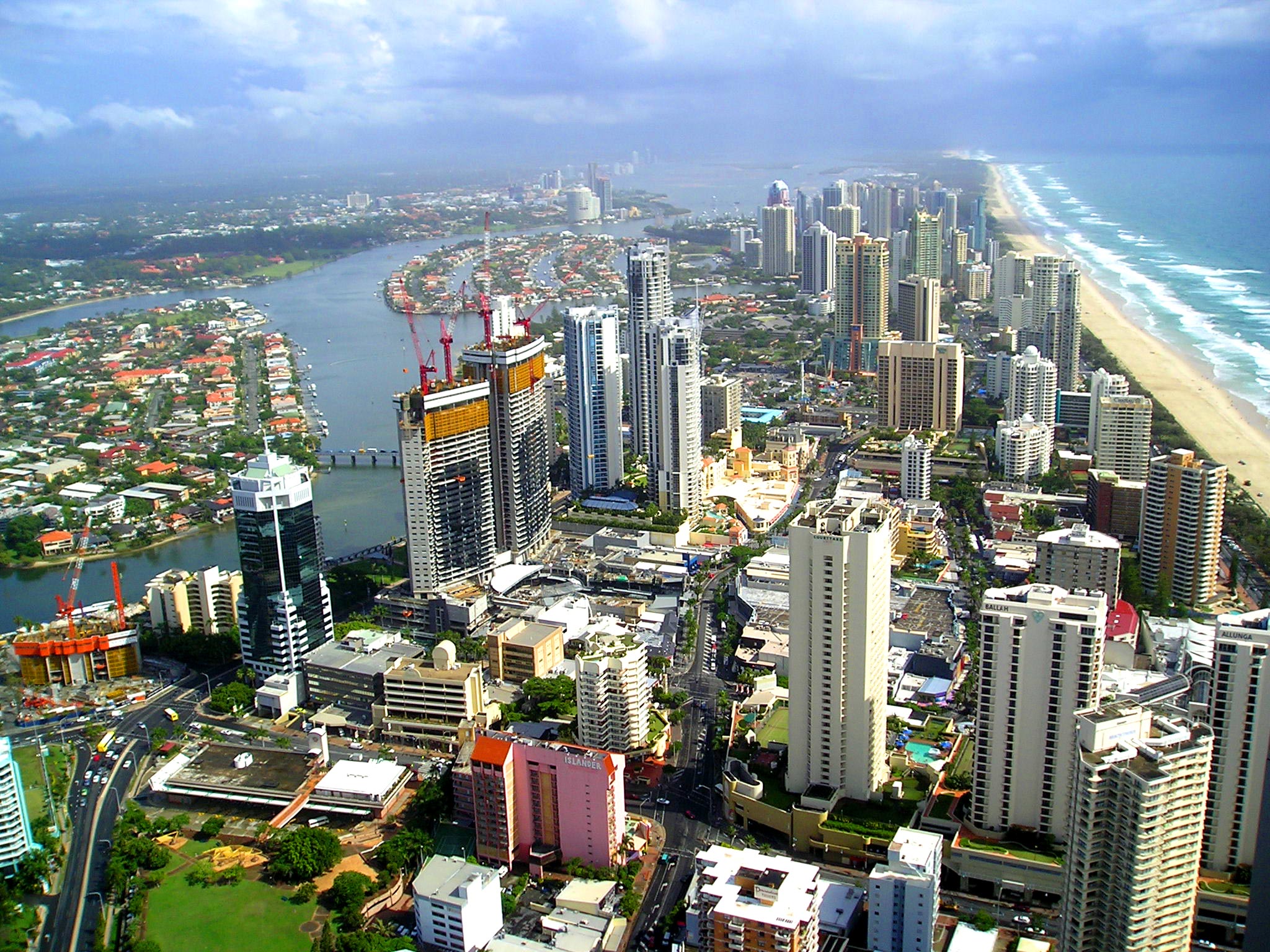 caption = Due north, Surfers Paradise
pop = 527,660
pop_footnotes=The Gold Coast is a and local government area in the southeast corner of , . It is the second most populous city in the state and the sixth most populous city in the country. Gold Coast City is renowned for its sunny , popular beaches, expansive waterway and systems, a skyline dominated by apartment buildings, active and wide variety of tourist attractions.

became the first European to note the region when he sailed along the coast on , in the .

Captain , an explorer charting the continent north from the colony of , sailed past in 1802. The region remained uninhabited by Europeans until 1823 when explorer landed at , which was named after his boat, a cutter named "Mermaid".

In 1925, tourism to the area grew rapidly when Jim Cavill established the Surfers Paradise Hotel, which transformed to neighbouring with shopping mall and resort apartment complex. The population grew steadily to support the tourism industry and by the 1940s, real estate speculators and journalists were referring to the area as the "Gold Coast." The true origin of the name is still debatable. The name "Gold Coast" was officially proclaimed in 1958 when the South Coast Town Council was renamed "Gold Coast Town Council."

During the 1970s, real-estate developers gained a dominant role in local politics, and high-rises began to dominate the area now known as and later in 1981 the airport was established. In 1994 the Gold Coast City Council and the Shire of Albert amalgamated to create new city boundaries under the administration of the City of Gold Coast Council.

These three teams all have their first season in 2007 and are the first national teams in many years to be situated on the Gold Coast.

There are many recreational activities situated on the Gold Coast ranging from (famously) surfing to fishing and boating to golf. The Gold Coast has numerous , including Hope Island, and . There is a range of sporting facilities on the Gold Coast from the , Carrara Indoor Sport Centre, and the Sports Super Centre. Some of these facilities are being superseded by newer and larger capacity facilities. Two examples of these are the to play host to a Gold Coast Basketball team and to host NRL games.

The Gold Coast has been accepted as one of two expansion tams in the A-League for he 2009/2010 season(The other team is based in Townsville, also in Queensland). The name of the franchise is to be and will also play out of Skilled Park.

The city was formerly represented in the now defunct by the East Coast Aces, who played out of Carrara Stadium.

The (formerly known as Lexmark Indy 300) is a car racing event held annually, usually in October. The course ventures through the streets of Surfers Paradise and Main Beach. The Indy 300 comprises many other events such as the Indy Undie Ball and the Miss Indy Competition. The event also coincides with the Indy 300, using the same track route.

The carnival is the brainchild of entrepreneurs (of Harvey Normans) and John Singleton. There are plans to relocate and build a state of the art new racetrack at Palm Meadows which will incoporate the Magic Million sale with facilities for up to 4000 horses. Fact|date=January 2008

Each June, hosts the Wintersun Festival, a two-week 1950s and 1960s nostalgia festival with free entertainment and attractions, including s, restored cars and revival bands playing music of the era.

Late November to early December sees thousands of school leavers across the country descend on the Gold Coast for Schoolies, a two week period of celebration and parties throughout Sufers Paradise, hosted by the . The event is often criticised nationally and locally for its portrayal of drinking and acts of violence, however every effort by the and State Government to ensure all school leavers have a good time are put into place, including locals volunteering by walking the streets and keeping an eye out for those in need of assistance on where to go, what to do and how to have a good time.

Early each year the Gold Coast hosts one leg of the ASP World Tour of surfing, where some of the worlds best surfers compete in the Quiksilver Pro at Coolangatta.

The Gold Coast Arts Centre located in Evandale, features a fine art gallery featuring local and international works from painting to sculpture and new media. In addition, there is a theatre for live productions including musicals as well 2 arts cinemas showing foreign and independent films from Australia and abroad.

Gold Coast is unique in that it is officially in the television broadcast licence areas of both Brisbane (metro) and Northern New South Wales (regional). The Brisbane networks are Seven, Nine and Ten. The regional affiliates are , and . Also broadcasting to the area are the ABC and SBS television services. Subscription television services (via cable) and (via satellite) are also available.

National surfing magazine is published in the Gold Coast suburb of Burleigh Heads, by Morrison Media.

Since the opening of the worlds highest residential tower in 2005, the Q1 building has been a popular destination for tourists and locals alike. It is the second highest public vantage point in the after the in . The observation deck at level 77 is the highest of its kind in and offers expansive views in all directions, from to . It towers over the skyline, with the observation deck 230 metres high, and the spire extending nearly another hundred metres up. In total, the Q1 is 322.5 metres high.

Bikini-clad meter maids were introduced in Surfers Paradise in 1965 in an attempt to put a positive spin on new parking regulations. To avoid tickets being issued for expired parking, the Meter Maids dispense coins into the meter and leave a calling card under the windscreen wiper of the vehicle. The Maids are still a popular part of the Surfers Paradise culture but the scheme is now run by private enterprise.

The Gold Coast's education infrastructure includes:
*Universities - Two major university campuses ( at Robina and , incorporating the Griffith Schools of Medicine and Dentistry and Oral Health at the and the main campus at Southport) and the smaller campus of at Southport
* - four campuses at Southport, Ridgeway (Ashmore), Benowa and Coolangatta
* - Over 100 primary and secondary schools, both public and private and of a variety of denominations.

The at Southport is the city’s major teaching and referral hospital and the third largest in Queensland, attending to over 58,000 cases a year [ [http://www.health.qld.gov.au/wwwprofiles/gcoast_gcoast_hosp.asp Gold Coast Hospital Profile ] ] , and overseeing other services of the "Gold Coast Health Service District" as its head office. There is a second public hospital situated in Robina but this second campus is smaller and mainly comprises rehabilitation, psychiatric and palliative wards along with a recently opened Emergency Department.

The Gold Coast has a wide range of public transport modes including buses, rail and monorail. The car is the dominant mode of transport for Gold Coast but with the increasing population that leads to more traffic congestion. Fact|date=July 2007 This has led to the Queensland State Government and Gold Coast City council placing more effort into providing public transport including a new Ferry service and the proposed Rapid Transit System. [ [http://www.transinfo.qld.gov.au/qt/translin.nsf/index/gc_rapidtransit Gold Coast Rapid Transit ] ] The Gold Coast's main provider of public bus services is Surfside Buslines. [ [http://www.surfside.com.au/surfside_busserv.htm Surfside Bus Services ] ]

is located at , approximately 22 kilometres south of Surfers Paradise. Services are provided to interstate capitals and major cities as well as to major cities, , and .

Electricity for the Gold Coast is sourced from Powerlink Queensland at bulk supply substations which is provided via the from an interconnected multi-State power system. The Government-owned electricity corporation distributes and retails electricity, natural gas, liquefied petroleum gas (LPG) and value-added products and services to residential, industrial and commercial customers in South-East Queensland.

The 15 km southwest of Nerang is the population's main water supply. The which feeds into Hinze Dam can supplement part of the city area's water needs, and both are managed by the city council directorate . Reforms of the way in which the water industry is structured have been announced by the State Government, with transfer of ownership and management of water services from local government to the state occurring in 2008-09. also sources water from , west of Brisbane for northern suburbs when the Hinze Dam, at one-tenth of Wivenhoe's capacity, becomes low. Water shortage and water restrictions have been current local issues, and a few new Gold Coast residential areas have recently included dual reticulation in their planning and development to supply water from a new water recycling plant being built concurrently. This will make available highly treated recycled water for use around the home in addition to potable water. The Gold Coast has received world recognition for this scheme in its Pimpama-Coomera suburbs. [ [http://www.goldcoast.qld.gov.au/t_gcw.asp?PID=5909 Gold Coast City Council - Pimpama Coomera Master Plan Frequently Asked Questions ] ] Gold Coast Water has also been recognised for its world leading HACCP water quality management system by the which published Gold Coast Water's system as a good model for managing water quality and safety from catchment to tap. [ [http://www.who.int/water_sanitation_health/dwq/wsp0506/en/ WHO | Water safety plans: Managing drinking-water quality from catchment to consumer ] ] A desalination plant is currently under construction at Tugun to supplement Southeast Queensland via a water grid.

Water
*A plant is currently being built in Tugun.
*Raising
*SEQ Water pipeline Fact|date=July 2007The Gold Coast has been also debating a controversial cruise ship terminal.

* Gold Coast Rapid Transit System a light rail or bus rapid transport system running mainly along Smith Street and Gold Coast highway from Southport down to Coolangatta is expected to start construction in 2008.

* The existing heavy rail Gold Coast line will be progressively extended to Coolangatta.

:"According to the [http://goldcoastcity.com.au/t_standard2.aspx?pid=256 Gold Coast City Council Website] "