Gold Coast Airport, or Coolangatta Airport, (IATA: OOL, ICAO: YBCG) is an Australian domestic and international airport on the Gold Coast and is located some 100 km (62 mi) south of Brisbane and 25 km south of Surfers Paradise. The entrance to the airport is situated in the suburb of Bilinga on the Gold Coast. The runway itself straddles 5 suburbs of twin cities across the state border of Queensland and New South Wales. During summer these states are in two different time zones.

Gold Coast Airport is currently the sixth busiest international airport in Australia and the 3rd fastest growing airport in the country.[2]

Until 1999, the airport was known as Coolangatta Airport. It originally consisted (1936) of three grass strips with the intention of only providing emergency landing ground for airmail aircraft transiting between Brisbane and Sydney. Finally, passenger flights took off for the first time in 1939, using the then grassy field of the current Coolangatta site. Regular services were started by Queensland Airlines and Butler Air Transport after the Second World War. Ansett started its own services in 1950 using DC-3s, while Trans Australia Airlines did the same in 1954 using DC-3s too as well as DC-4s and Convairs to link other Australian cities.[4]

By 1958, the taxiways and runways were fully paved, with the later being upgraded a decade later to allow jet operations with DC-9 and L-188 Electra aircraft to began. The current terminal, entitled Eric Robinson Building, was officially opened in 1981 by Acting Prime Minister Douglas Anthony, when at the time more than 650,000 passengers were using the airport. The following year, the main runway was lengthened to 2,042 m (6,699 ft), thus permitting the use of wide-body jets by the two domestic operators Ansett Australia and Trans Australia Airlines and their Boeing 767 and Airbus A300 respectively on flights from Melbourne and Sydney.[4]

On 1 January 1988, the airport ownership was transferred from the government to the Federal Airports Corporation. Its full privatisation occurred a decade later, when it was taken over by Queensland Airports Limited (QAL) on 29 May 1998. By 1999, the company's name had changed to become Gold Coast Airport Pty Ltd (GCAPL).[5] The airport suffered from the collapse of Ansett in 2001– Ansett had operated direct services from the Gold Coast to 12 Australian destinations.

In 2003 GCAPL was taken over by Queensland Airports Limited and today also own and operate Mount Isa Airport and Townsville Airport.[6]

Despite the name change from Coolangatta Airport to Gold Coast Airport during change of ownership, the airport still carries its original IATA Airport Code, OOL.

In 1990, the airport welcomed its first international charter service from New Zealand, and by 1999, Air New Zealand low-cost subsidiary Freedom Air started scheduled no-frills service from Hamilton, New Zealand with Boeing 737s. In 2007, the airport celebrated the arrival of AirAsia X, which began services directly to Kuala Lumpur, Malaysia, and Tiger Airways Australia, which started services to Melbourne. By January 2008, the Kuala Lumpur route had proved so popular, that all flights up to the month of March were completely booked. AirAsia X announced that they would begin a daily service from 6 February 2010.[7]

On 22 September 2008 it was announced that Air Pacific will expand its services to Australia with the introduction of twice weekly flights between Nadi, Fiji and the Gold Coast commencing December 2008. Air Pacific’s Managing Director and CEO, John Campbell, said "Australia is Fiji's number one source of visitors and with the population growing rapidly in the South East corner of Queensland we know the time is right to introduce this service." The new route commenced on 1 December 2008 with two flights per week operated by 160 seat Boeing 737–800 aircraft on a Monday and Saturday. The service has since been suspended.

2010 saw Jetstar announce the airport as its newest hub, increased services to Cairns[8] and new direct services to Perth[9] and Queenstown.[10] Tiger Airways also announced their newest base at Avalon Airport in Geelong, and said that services from Avalon to the Gold Coast will commence later in the year;[11] however, services to Adelaide would be cut due to delays in receiving new aircraft which were meant to be for their new Avalon base.[12]

On 13 June 2010, start up airline Pacific Flier began weekly services from Koror, Palau, using an Airbus A310. The route has since been suspended due to traffic rights and terminal access being halted in Palau.[13]

On 30 March 2011, Gold Coast Airport was named the Best Regional Airport Asia/Pacific and was awarded the Staff Service Excellence Australia/Pacific award at the Skytrax World Airport Awards in Copenhagen, Denmark.[16]

Eric Robinson terminal from inside an Airbus A320

It is anticipated that a railway station will be constructed at the airport when the Gold Coast Line is extended. The recently opened Tugun Bypass provides a much faster road link to the Airport, with the bypass also featuring a tunnel under the runway.[17]

The airport opened an extension to the main runway as well as a full length parallel taxiway in May 2007. The runway will be 2,500 m (8,202 ft) long, allowing for heavier aircraft with greater range to takeoff.[18] On 16 May 2007, the runway extension was officially inaugurated by Deputy Prime Minister and Minister for Transport, the Hon Mark Vaile MP.[19]

Gold Coast Airport appointed ADCO Constructions as the principal design and construct contractor for a $100 million redevelopment of the airport’s main terminal. Completed in 2010, the project has doubled the size of the existing facility to almost 27,000 m2 (290,000 sq ft), incorporating domestic and international operations with self service kiosks and 40 common user check-in desks. The works will accommodate forecast growth for the next 10 years with a further expansion, stage two, scheduled to kick in upon demand. The main terminal – Terminal 1 – currently houses operations for Jetstar Airways, Virgin Australia, Air New Zealand, Airnorth, Pacific Blue Airlines and AirAsia X. Terminal 2 accommodates Tiger Airways Australia.

Tiger Airways Australia flights operate from a low cost terminal with basic amenities, located approximately 200 m (660 ft) from the main terminal building. The building is loosely similar to Terminal 4 at Melbourne Airport but on a much smaller scale.

SEAIR Pacific, a scheduled and charter airline based at Gold Coast Airport, operate from their own hangar situated in the general aviation part of the airport.

The following airlines operate scheduled and in some cases chartered passenger flights from Gold Coast Airport. All passenger airlines operate flights from the main terminal (T1), with the exception of SEAIR Pacific and Tiger Airways, with SEAIR Pacific operating from their own hangar in the general aviation part of the airport, and Tiger Airways operating from Terminal 2 (T2)

Australian air Express uses the belly space of Jetstar aircraft to transport cargo domestically. It is also contracted for Jetstar international flights and Air New Zealand flights from the airport. It offers same day/overnight and standby services domestically airport to airport and airport to door from Gold Coast Airport.[21] 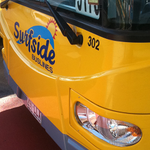 Both of these are operated 7 days by Surfside Buslines