Kansai International Airport (関西国際空港, Kansai Kokusai Kūkō?) (IATA: KIX, ICAO: RJBB) is an international airport located on an artificial island in the middle of Osaka Bay, 38 km (24 mi) southwest of Ōsaka Station,[1] located within three municipalities, including Izumisano (north),[3] Sennan (south),[4] and Tajiri (central),[5] in Osaka Prefecture, Japan. The airport is off the Honshu shore. The airport serves as an international hub for All Nippon Airways, Japan Airlines, and Nippon Cargo Airlines. Peach, the first international low-cost carrier in Japan, plans to make Kansai its main hub starting in 2012.

3rd floor boarding lobby, part of the longest airport concourse in the world.

In the 1960s, when the Kansai region was rapidly losing trade to Tokyo, planners proposed a new airport near Kobe and Osaka. Osaka International Airport, located in the densely-populated suburbs of Itami and Toyonaka, was surrounded by buildings; it could not be expanded, and many of its neighbors had filed complaints because of noise pollution problems.

After the protests surrounding New Tokyo International Airport (now Narita International Airport), which was built with expropriated land in a rural part of Chiba Prefecture, planners decided to build the airport offshore. The new airport was part of a number of new developments to revitalize Osaka, which had lost economic and cultural ground to Tokyo for most of the century.[8]

Initially, the airport was planned to be built near Kobe, but the city of Kobe refused the plan, so the airport was moved to a more southerly location on Osaka Bay. There, it could be open 24 hours per day, unlike its predecessor in the city. 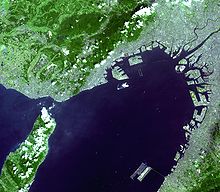 Satellite photo of Kansai Airport (lower-right island) in Osaka Bay. Kobe Airport is being built on the unfinished island near the middle of the photo. Central Osaka is in the upper-right corner, along with Osaka International. 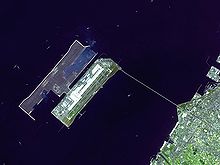 Closeup of the artificial island

Construction started in 1987. The sea wall was finished in 1989 (made of rock and 48,000 tetrahedral concrete blocks). Three mountains were excavated for 21,000,000 m3 (27,000,000 cu yd) of landfill. 10,000 workers and 10 million work hours over three years, using eighty ships, were needed to complete the 30-metre (98 ft) layer of earth over the sea floor and inside the sea wall. In 1990, a three kilometer bridge was completed to connect the island to the mainland at Rinku Town, at a cost of $1 billion. Completion of the artificial island increased the area of Osaka Prefecture just enough to move it past Kagawa Prefecture in size (leaving Kagawa as the smallest by area in Japan).

The bidding and construction of the airport was a source of international trade friction during the late 1980s and early 1990s. Prime Minister Yasuhiro Nakasone responded to American concerns, particularly from Senator Frank Murkowski, that bids would be rigged in Japanese companies' favor by providing special offices for prospective international contractors,[9] which ultimately did little to ease the participation of foreign contractors in the bidding process.[10] Later, foreign airlines complained that two-thirds of the departure hall counter space had been allocated to Japanese carriers, disproportionately to the actual carriage of passengers through the airport.[11]

The island had been predicted to gradually sink as the weight of the material used for construction would cause it to compress. However, by this time, the island had sunk 8 m (26 ft), much more than predicted. The project then became the most expensive civil works project in modern history after twenty years of planning, three years of construction and several billion dollars of investment. Much of what was learned went into the successful artificial islands in silt deposits for New Kitakyushu Airport, Kobe Airport, and Chūbu Centrair International Airport. The lessons of Kansai Airport were also applied in the construction of Hong Kong International Airport.[12]

In 1991, the terminal construction commenced. To compensate for the sinking of the island, adjustable columns were designed to support the terminal building. These could be extended by inserting thick metal plates at their bases. Government officials proposed reducing the length of the terminal to cut costs, but architect Renzo Piano insisted on keeping the terminal at its full planned length.[13] The airport opened in 1994.

On 17 January 1995, Japan was struck by the Kobe earthquake, whose epicenter was about 20 km (12 mi) away from KIX and killed 6,434 people on Japan's main island of Honshū. Due to its earthquake engineering, the airport emerged unscathed, mostly due to the use of sliding joints. Even the glass in the windows remained intact. Later, in 1998, the airport survived a typhoon with wind speeds of up to 200 km/h (120 mph).

On 19 April 2001, the airport was one of ten structures given the "Civil Engineering Monument of the Millennium" award by the American Society of Civil Engineers.[14]

The total cost of Kansai Airport so far is $20 billion. This includes land reclamation, two runways, terminal and facilities. Most additional costs were initially due to the island sinking, expected due to the soft soils of Osaka Bay. After construction the rate of sinking was considered so severe that the airport was widely criticized as a geotechnical engineering disaster. The sink rate has since fallen from 50 cm (20 in) during 1994 to 7 cm (2.8 in) in 2008.[15]

Aircraft in front of the terminal building

Opened on 4 September 1994, the airport serves as a hub for several airlines such as All Nippon Airways, Japan Airlines, and Nippon Cargo Airlines. It is the international gateway for Japan's Kansai region, which contains the major cities of Kyoto, Kobe, and Osaka. Other Kansai domestic flights fly from the older but more conveniently located Osaka International Airport in Itami, or from the newer Kobe Airport.

The airport had been deeply in debt, losing $560 million in interest every year. Airlines had been kept away by high landing fees (about $7,500 for a Boeing 747), the second most expensive in the world after Narita's. In the early years of the airport's operation, excessive terminal rent and utility bills for on-site concessions also drove up operating costs: some estimates before opening held that a cup of coffee would have to cost US$10.[16] Osaka business owners pressed the government to take a greater burden of the construction cost to keep the airport attractive to passengers and airlines.[17] Nowadays, after deep discounts, the number of flights are increasing.

On 17 February 2005, Chubu Centrair International Airport opened in Nagoya, just east of Osaka. The opening of the airport was expected to increase competition between Japan's international airports. Despite this, passenger totals were up 11% in 2005 over 2004, and international passengers increased to 3.06 million in 2006, up 10% over 2005. Adding to the competition was the opening of Kobe Airport, less than 25 km (16 mi) away, in 2006 and the lengthening of the runway at Tokushima Airport in Shikoku in 2007.

The main rationale behind the expansions is to compete with Incheon International Airport and Hong Kong International Airport as a gateway to Asia, as Tokyo area airports are severely congested. However, with the regional trend in open skies agreements being signed, it is possible that all airports can see increases in traffic.

Kansai has been marketed as an alternative to Narita Airport for international travellers from the Greater Tokyo Area. By flying to Kansai from Haneda Airport and connecting to international flights there, travellers can save the additional time required to get to Narita: up to one and a half hours for many residents of Kanagawa Prefecture and southern Tokyo. Due to the time-limited nature of Haneda's new long-haul international slots this will remain a viable option for daytime travelers.

The airport was at its limit during peak times, owing especially to freight flights, so a portion of Phase II expansion—the second runway—was made a priority.[18] Thus, in 2003, believing that the sinking problem was almost over, the airport operators started to construct a 4,000 m (13,000 ft) second runway and terminal.

The second runway opened on 2 August 2007, but without the originally planned terminal portion, now postponed to a later date. This lowered the project cost to JPY¥910 billion (approx. US$8 billion), saving ¥650 billion from the first estimate.[19] The additional runway development, which was opened in time for the IAAF world athletics championships in Osaka, has expanded the airport size to 10.5 km2 (4.1 sq mi).

Further into the future, the airport is planning to construct a new terminal building, several aprons, a third runway (06C/24C) with a length of 3,500 m (11,483 ft), a new cargo terminal and expanding the airport size to 13 km2 (5.0 sq mi). However, the Japanese Government is postponing these plans for economic reasons. The new runway is only used for landings unless there are incidents prohibiting take off use of runway A.

Since July 2008, Osaka Prefecture governor Toru Hashimoto has been a vocal critic of Itami Airport, arguing that the Chuo Shinkansen maglev line will make much of its domestic role irrelevant, and that its domestic functions should be transferred to Kansai Airport in conjunction with upgraded high-speed access to Kansai from central Osaka.[22] In 2009, Hashimoto also publicly proposed moving the functions of Marine Corps Air Station Futenma to Kansai Airport as a possible solution for the political crisis surrounding the base.[23]

In May 2011, the Diet of Japan passed legislation to form a new Kansai International Airport Corporation using the state's existing equity stake in Kansai Airport and its property holdings at Itami Airport. The move was aimed at offsetting Kansai Airport's debt burden.[24]

The ground level of the terminal looking north from the center

The KIX passenger terminal is a single four-storey building designed by Renzo Piano Building Workshop (Renzo Piano and Noriaki Okabe) and has a gross floor space of 296,043 square metres (3,186,580 sq ft). It was once the longest airport terminal in the world, at a total length of 1.7 km (1.1 mi) from end to end. It has a sophisticated people mover system called the Wing Shuttle, which moves passengers from one end of the pier to the other.

The terminal's roof is shaped like an airfoil. This shape is used to promote air circulation through the building: giant air conditioning ducts blow air upwards at one side of the terminal, circulate the air across the curvature of the ceiling, and collect the air through intakes at the other side. Mobiles are suspended in the ticketing hall to take advantage of the flowing air.

The ticketing hall overlooks the international departures concourse, and the two are separated by a glass partition. During Kansai's early days, visitors were known to throw objects over the partition to friends in the corridor below. The partition was eventually modified to halt this practice.

:A:^ Some of Qatar Airways's flights stop at Tokyo-Narita en route to Doha. However, the airline has no rights to transport passengers between Osaka and Tokyo. 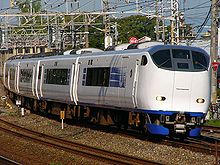 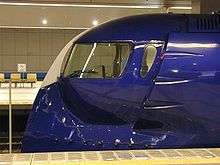 Kansai International Airport is connected only by the Sky Gate Bridge R, a road / railroad bridge to Rinku Town and the mainland. The lower railroad level of the bridge is used by two railroad operators: West Japan Railway (JR West) and Nankai Electric Railway.

Railroad plans were drawn up in the late 1980s for an underwater railway connecting Kansai Airport to downtown Kobe and Kobe Airport, although the extremely high cost of the project led to its indefinite postponement.

Sky Gate Bridge to the mainland

Two six story parking structures, called P1 and P2, are located above a railroad terminal station, while the other two level parking facilities, called P3 and P4, are situated next to "Aeroplaza", a hotel complex.

The airport is only accessible from the Sky Gate Bridge R, a part of Kansai Airport Expressway. The expressway immediately connects to Hanshin Expressways Route 5, "Wangan Route", and Hanwa Expressway.

Previous services to Sumoto on Awaji Island and to Tokushima have been discontinued. 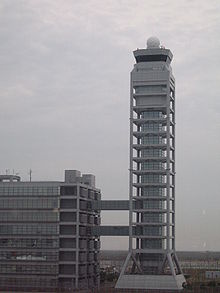 The longest truss bridge in the world at 3,750 m (12,303 ft). The double-decker bridge consists of a lower deck devoted to rail, with the upper for road.