As of October 2011[update], Uzbekistan Airways is ranked as a 2-star airline by the United Kingdom-based consultancy Skytrax, out of a 5-star ranking.[3]

The carrier was established from the Aeroflot – Uzbekistan Division on 28 January 1992.[4] Following the dissolution of the Soviet Union, Uzbek President Islam Karimov in 1992 authorised the creation of Uzbekistan Airways. The airline's maiden flight was from Tashkent to London. 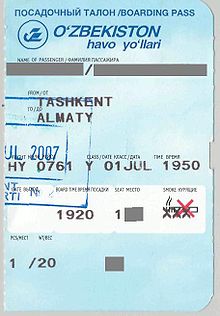 Boarding pass for an international flight from Tashkent to Almaty. (2007)

Uzbekistan Airways serves almost 50 destinations worldwide and at home, from Tashkent International Airport. The airline owns 11 airports, five of which have international status.[citation needed] Uzbekistan Airways is not part of any partnerships or alliances, but is in talks to join the SkyTeam Alliance.

The CEO of Uzbekistan Airways is Valeriy Nikolaevich Tyan.

According to reports from boarding.no and the Uzbek government, Uzbekistan Airways is in negotiations with SkyTeam to join the alliance; however, as of yet, no official announcement has been made by either the airline or by SkyTeam. If accepted, the membership will enable Uzbekistan Airways customers to fly to over 900 destinations worldwide on partner airlines.[5][6][7] Uzbekistan Airways' candidacy is being sponsored by Korean Air.[citation needed]

Uzbekistan Airways has code share agreements with the following airlines:

Both the Boeing 757-200 and the Boeing 767-300ER entered the fleet in late 1996; the airline took delivery of these aircraft as part of an order placed in October 1995.[8] Still in operation, both types are powered with Pratt & Whitney engines.[8]

Uzbekistan Airways was the launch customer for the Ilyushin Il-114; it took delivery of the first, locally-assembled aircraft, in July 1998.[9][10] As of October 2011[update], it is the sole worldwide operator of the type.[citation needed]

The airline took delivery of its first A320 in July 2010; the type started operations servicing the Tashkent–Baku route.[17]

According to Aviation Safety Network, the airline experienced 8 accident/incident events throughout its history, totalling 54 reported fatalities;[20] only those involving fatalities and hull-losses are listed below.