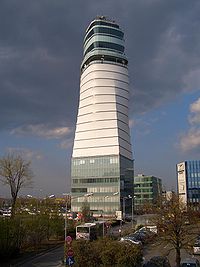 Inside the control tower at Misawa Air Base, Japan.

A control tower, or more specifically an Air Traffic Control Tower (TWR), is the name of the airport building from which the air traffic control unit controls the movement of aircraft on and around the airport. Control towers are also used to control the traffic for other forms of transportation such as rail transport (see illustration below), sea port or moveable bridges. Most of the world's airports are non-towered or mandatory frequency — only a minority of airports have enough traffic to justify a control tower, though some airports may open temporary tower units during special events like an airshow. Control towers are also located on aircraft carriers.

Permanent control tower structures generally rise high above other buildings at an airport to give air traffic controllers a view of aircraft moving on the ground and in the air around the airport, though temporary tower units may operate from trailers or even portable radios outside.

Medium-traffic airports may have only one controller staffing the control tower, and may not keep the tower open 24 hours per day. Busier airports usually have space for several controllers and other support staff, and operate 24 hours per day, 365 days per year. 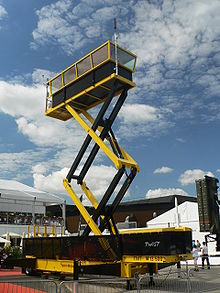 Full control tower structures usually have windows that circle the entire top floor, giving all round vision. The windows are usually tilted outwards at 15 degrees, because otherwise the controllers would see the reflection of their equipment. The ceiling may also be painted black.[1]

Other equipment may include the following:

The very first control tower for an airport was built in 1925 in Cleveland Hopkins International Airport.