Air traffic controllers are the people who expedite and maintain a safe and orderly flow of air traffic in the global air traffic control system. The position of the air traffic controller is one that requires highly specialized skills. Controllers apply separation rules to keep aircraft apart from each other in their area of responsibility and move all aircraft safely and efficiently through their assigned sector of airspace. Because controllers have an incredibly large responsibility while on duty, the ATC profession is regarded around the world as one of the most challenging careers, and can be notoriously stressful depending on many variables (equipment, configurations, weather, traffic volume, human factors, etc.). Having said this, many controllers would cite high salaries and a very large degree of autonomy as major advantages of their jobs.

Features of the job

Core skills of a controller

Air traffic controllers are generally individuals who are well organized, are quick with numeric computations and mathematics, have assertive and firm decision making skills, and possess excellent short-term memory and visual memory abilities. In addition, studies have shown that air traffic controllers generally have a degree of situational awareness that is much higher than the average population. Excellent hearing and speaking skills are a requirement, and trainees undergo rigid physical and psychological testing. In addition they are generally assertive but calm under pressure, and they are able to follow and apply rules yet be flexible when necessary. Air traffic controllers must maintain some of the strictest medical and mental requirements for professions; conditions such as diabetes, epilepsy, heart disease, and many mental disorders (e.g., bipolar disorder, a history of drug abuse) typically disqualify people from obtaining certification. Conditions such as hypertension, while not disqualifying, are taken seriously and must be monitored with medical examinations by certified doctors. Controllers must take precautions to remain healthy and avoid certain medications that are banned for them. Many drugs approved by the U.S. Food and Drug Administration (FDA) such as SSRI antidepressants are banned without specialized certification. Almost universally, trainee controllers begin work in their twenties and retire in their fifties.

Communication is a vital part of the job: controllers are trained to precisely focus on the exact words pilots and other controllers speak, because a single misunderstanding about an altitude level or runway number for example can have tragic consequences. Controllers communicate with the pilots of aircraft using a push-to-talk radiotelephony system, which has many attendant issues such as the fact only one transmission can be made on a frequency at a time, or transmissions will either merge together or block each other and become unreadable.

Although local languages are sometimes used in ATC communications, the default language of aviation worldwide is English. Controllers who do not speak this as a first language are generally expected to show a certain minimum level of competency with the language.

Teamwork plays a major role in a controller’s job, not only with other controllers and air traffic staff, but with pilots, engineers and managers.

Area controllers are responsible for the safety of aircraft at higher altitudes, in the en route phase of their flight. In most nations they are known as "area" or "en route" controllers. Airspace under the control of Area controllers is split into sectors which are 3D blocks of airspace of defined dimensions. Each sector will be managed by at least one Area controller. This can be done either with or without the use of radar: radar allows a sector to handle much more traffic, however procedural control is used in many areas where traffic levels do not justify radar or the installation of radar is not feasible. In the United States, En-Route controllers work at Air Route Traffic Control Centers or ARTCCs. In other countries, area controllers work in Area Control Centers, controlling high-level en-route aircraft, or Terminal Control Centers, controlling aircraft at medium levels climbing and descending from major groups of the airports.

Aerodrome or Tower controllers control aircraft within the immediate vicinity of the airport and use visual observation from the airport tower. The tower's airspace is often a 5-nautical-mile (9.3 km) radius around the airport, but can vary greatly in size and shape depending on traffic configuration and volume.

The tower positions are typically split into many different positions such as Flight Data/Clearance Delivery, Ground Control, and Local Control (known as Tower by the pilots); at busier facilities, a limited radar approach control position may be needed.

The roles of the positions are; 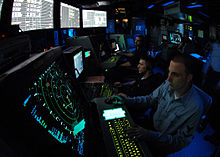 Most countries' armed forces employ air traffic controllers, often in most if not all branches of the forces. Although actual terms vary from country to country, controllers are usually enlisted.

In some countries, such as Brazil, all air traffic control is performed by the military.[1] In other countries, military controllers are responsible solely for military airspace and airbases; civilian controllers maintain airspace for civilian traffic and civilian airports. Historically in most countries this was part of the government and controllers were civil servants. However, many countries have partly or wholly privatized their air traffic control systems; others are looking to do the same.

Civilian Air Traffic Controllers' licensing is standardized by international agreement through ICAO. Many countries have Air Traffic Control schools, academies or colleges, often operated by the incumbent provider of air traffic services in that country, but sometimes privately. These train student controllers from walking in off the street to the standards required to hold an Air Traffic Control license, which will contain one or more Ratings. These are sub-qualifications denoting the air traffic control discipline or disciplines in which the person has been trained. ICAO defines five such ratings: Area (procedural), Area Radar, Approach (procedural), Approach Radar and Aerodrome. In the United States, controllers may train in several similar specialties: Tower, Ground-Controlled Approach (GCA), Terminal Radar Control, or Enroute Control (both radar and non-radar). This phase of training takes between 6 months and several years.

Whenever an air traffic controller is posted to a new unit or starts work on a new sector within a particular unit, they must undergo a period of training regarding the procedures peculiar to that particular unit and/or sector. The majority of this training is done in a live position controlling real aircraft and is termed On the Job Training (OJT), with a fully qualified and trained mentor or On the Job Training Instructor (OJTI) also 'plugged in' to the sector to give guidance and ready to take over in a second should it become necessary. The length of this phase of training varies from a matter of months to years, depending on the complexity of the sector.

Only once a person has passed all these training stages they will be allowed to control on their possessions.

Typically, controllers work "on position" for 90 to 120 minutes then they get 30 minutes break. Except at quieter airports, Air Traffic Control is a 24 hours, 365-days-a-year job. Therefore controllers usually work rotating shifts, including nights, weekends and public holidays. These are usually set twenty eight days in advance. In many countries the structure of controllers' shift patterns is regulated to allow for adequate time off. In the UK the most common pattern is two mornings, two late afternoons and 2 evenings/nights followed by 4 day break.[2]

If employed by the FAA, the latest one can start training is usually age 30, and retirement is mandatory at 56 years of age. However, retired military air traffic controllers may qualify for appointment after reaching 31 years of age.[3]

With NATS, the minimum age to start the application and training is 18 while the mandatory retirement age is 60.[4] If an 18 year old joins and is successful then they will have to be posted to an Area course which will ensure they are 21 years old on graduation, thus old enough to hold a radar licence.[5]

Many countries regulate work hours to ensure that controllers are able to remain focused and effective. Research[citation needed] has shown that when controllers remain ‘in position’ for more than two hours without a break, performance can deteriorate rapidly, even at low traffic levels. Many national regulations therefore require breaks at least every two hours.

Computerization and the future

Despite years of effort and the billions of dollars that have been spent on computer software designed to assist air traffic control, success has been largely limited to improving the tools at the disposal of the controllers such as computer-enhanced radar. It is likely that in the next few decades, future technology will make the controller more of system manager overseeing decisions made by automated systems and manually intervening to resolve situations not handled well by the computers, rather than being automated out of existence altogether.

However there are problems envisaged with technology that normally takes the controller out of the decision loop but requires the controller to step back in to control exceptional situations: air traffic control is a skill that has to be kept current by regular practice. This in itself may prove to be the largest stumbling block to the introduction of highly automated air traffic control systems.

In the U.S., a majority of the air traffic control workforce will retire over the next 10 years. As a result, the Federal Aviation Administration is hiring more than 12,000 new trainees (that take 3–5 years to become fully certified controllers) over the next decade.

Prior experience or training in air traffic control is not required. However, candidates must have three years of progressively responsible work experience, have completed a full 4-year course of study leading to a bachelor’s degree, or possess an equivalent combination of work experience and college credits. In combining education and experience, 1 year of undergraduate study (30 semester or 45 quarter hours) is equivalent to 9 months of general experience. Certain kinds of aviation experience may be substituted for these requirements.

U.S. citizenship is required. Candidates must be able to speak English clearly enough to be understood over radios, intercoms, and similar communications equipment.

If a candidate decides to join through NATS, they will begin a rigorous training regime. Once the initial application form is completed and if successful, the candidate will have to complete an online test which is basic checking and mental arithmetic. Stage 1 follows which is a selection of paper and pencil tests. If successful, Stage 2 is a day of computer tests which again further test the candidates skill-set for the job and their aptitude. Stage 3 is the final stage, it involves a thorough interview and a group exercise. If successful then the candidate will go for a medical and the process for security clearance begins. If the candidate gets this far, he represents the top 3% of applicants.[10]

Controllers can earn up to £90,000 per year depending on employer, experience and the unit at which they are employed (the highest salary potential for NATS Controllers is at Swanwick and Heathrow). Controllers employed by NATS, on appointment as an Air Traffic Controller (3rd anniversary of joining NATS) earn between £41,653 - £46,423 plus shift pay of approximately £5,489 (April 2009).[11]