When the First Fleet was sent to New South Wales in 1787, the Reverend Richard Johnson of the Church of England was licensed as chaplain to the Fleet and the settlement. In 1825 the Revd Thomas Scott was appointed Archdeacon of Australia under the jurisdiction of the Bishop of Calcutta. The Revd William Grant Broughton, who succeeded Scott in 1829, was consecrated the first (and only) "Bishop of Australia" in 1836.

In early Colonial times, Church of England clergy worked closely with the governors. Richard Johnson, a chaplain, was charged by the governor, Arthur Phillip, with improving "public morality" in the colony, but he was also heavily involved in health and education.[1] The Reverend Samuel Marsden (1765–1838) had magisterial duties, and so was equated with the authorities by the convicts. He became known as the "flogging parson" for the severity of his punishments.[2] Some of the Irish convicts had been transported to Australia for political crimes or social rebellion in Ireland, so the authorities were suspicious of Catholicism for the first three decades of settlement and Catholic convicts were compelled to attend Church of England services and their children and orphans were raised by the authorities as Anglicans.[3][4]

The Church of England lost its legal privileges in the Colony of New South Wales by the Church Act of 1836. Drafted by the reformist attorney-general John Plunkett. The act established legal equality for Anglicans, Catholics and Presbyterians and was later extended to Methodists.[5]

A mission to the Aborigines was established in the Wellington Valley in New South Wales by the Church Missionary Society in 1832, but it ended in failure and indigenous people in the 19th century demonstrated a reluctance to convert to the religion of the colonists who were seizing their lands.[6]

In 1842 the Diocese of Tasmania was created. In 1847 the rest of the Diocese of Australia was divided into the four separate dioceses of Sydney, Adelaide, Newcastle and Melbourne. Over the following 80 years the number of dioceses increased to 25.

Sectarianism in Australia tended to reflect the political inheritance of Britain and Ireland. Until 1945, the vast majority of Catholics in Australia were of Irish descent, causing the Anglo-Protestant majority to question their loyalty to the British Empire.[4] The Australian Constitution of 1901 provided for freedom of religion. Australian society was predominantly Anglo-Celtic, with 40% of the population being Anglican. It remained the largest Christian denomination until the 1986 census. After World War II, the ethnic and cultural mix of Australia diversified and Anglicanism gave way to Catholicism as the largest denomination. The number of Anglicans attending regular worship began to decline in 1959 and figures for occasional services (baptisms, confirmations, weddings and funerals) started to decline after 1966.[6] In recent times, the Anglican and other Christian churches of Australia have been active in ecumenical activity. The Australian Committee for the World Council of Churches was established in 1946 by the Anglican and mainline Protestant churches. The movement evolved and expanded with Eastern and Oriental Orthodox churches later joining and by 1994 the Roman Catholic Church was also a member of the national ecumenical body, the National Council of Churches in Australia.

Since 1 January 1962 the Australian church has been autocephalous and headed by its own primate. In 1981 the church changed its name from the Church of England in Australia to the Anglican Church of Australia.[7]

In 1985 the general synod of the Australian church passed a canon to allow ordination of women as deacons. In 1992 the general synod approved legislation allowing dioceses to ordain women to the priesthood. Dioceses could choose to adopt the legislation. In 1992, 90 women were ordained in the Anglican Church of Australia and two others who had been ordained overseas were recognised.[8] After decades of debate the issue of women's ordination, particularly as bishops, continues to divide traditionalists and reformers within the church and some dioceses still do not ordain women.[9]

The church remains a major provider of education and welfare services in Australia.[10] It provides chaplains to the Australian Defence Force, hospitals, schools, industry and prisons.[6] Senior clergy such as Peter Jensen, Archbishop of Sydney, have a high profile in discussions on a diverse range of social issues in contemporary national debates.[11] In recent times the church has encouraged its leaders to talk on such issues as indigenous rights; international security, peace and justice; and poverty and equity.[12] The current primate is the Archbishop of Brisbane, the Most Reverend Phillip Aspinall.

Like other religious groups, it has come under criticism in light of cases of sexual abuse by the church.[13][14][15] 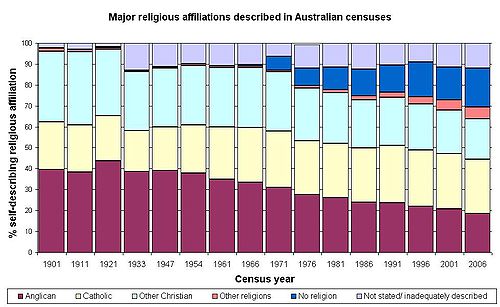 Until the 1986 census, Australia's most populous Christian church was the Anglican Church of Australia. Since then Catholics have outnumbered Anglicans by an increasing margin. One rationale to explain this relates to changes in Australia's immigration patterns. Prior to the Second World War, the majority of immigrants to Australia had come from the United Kingdom - though most of Australia's Catholic immigrants had come from Ireland. After World War II, Australia's immigration program diversified and more than 6.5 million migrants arrived in Australia in the 60 years after the war, including more than a million Catholics.

The Australian church consists of twenty-three dioceses arranged into five provinces (except for Tasmania) with the metropolitical sees in the states' capital cities. Broughton Publishing is the church's national publishing arm.[citation needed]

Anglicans have played a prominent role in welfare and education since Colonial times, when First Fleet chaplain Richard Johnson was credited by one convict as "the physician both of soul and body" during the famine of 1790 and was charged with general supervision of schools.[1] Today the church remains a significant provider of social welfare with has organisations working in education, health, missionary work, social welfare and communications. Welfare organisations include Anglicare and Samaritans. There are around 145 Anglican schools in Australia, providing for more than 105,000 children.[10] Church schools range from low-fee, regional and special needs schools to high-fee leading independent schools like Geelong Grammar, whose alumni include Prince Charles and Rupert Murdoch; and Sydney's The Kings School. The Australian Anglican Schools Network is the national schools network of the Australian General Synod.[17] 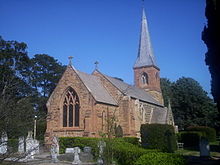 St John the Baptist Church, Reid, built in the 1840s is the oldest building within Canberra's city precinct.

The first Church of England edifice was built in the colony of New South Wales in 1793.[18] Today, most towns in Australia have at least one Christian church. One of Australia's oldest Anglican churches is St James' Church in Sydney, built between 1819 and 1824. The historic church was designed by Governor Macquarie's architect, Francis Greenway - a former convict - and built with convict labour. The church is set on a sandstone base and built of face brick with the walls articulated by brick piers.[19] Sydney's Anglican cathedral, St Andrew's, was consecrated in 1868 from foundations laid in the 1830s. Largely designed by Edmund Thomas Blacket in the Perpendicular Gothic style reminiscent of English cathedrals. Blacket also designed St Saviour's Cathedral in Goulburn, based on the on the Decorated Gothic style of a large English parish church and built between 1874-1884.[20]

St Paul's Cathedral, Melbourne, from a foundation stone laid in 1880, is a Melbourne landmark. It was designed by the distinguished English architect William Butterfield in Gothic Transitional.[21]

Tasmania is home to a number of significant colonial Anglican buildings including those located at Australia's best preserved convict era settlement, Port Arthur. According to 19th century notions of prisoner reform, the Model Prison incorporates a grim chapel, into which prisoners in solitary confinement were shepherded to listen (in individual enclosures) to the preacher's Sunday sermon - their only permitted interaction with another human being.[22] Adelaide, the capital of South Australia has long been known as the City of Churches and its St Peter's Anglican Cathedral is a noted city landmark.[23]

The oldest building in the city of Canberra is the picturesque St John the Baptist Church in Reid, consecrated in 1845. This church long predates the city of Canberra and is not so much representative of urban design as it is of the Bush chapels which dot the Australian landscape and stretch even into the far Outback.

A number of notable Victorian era chapels and edifices were also constructed at church schools across Australia. Along with community attitudes to religion, church architecture changed significantly during the 20th century. 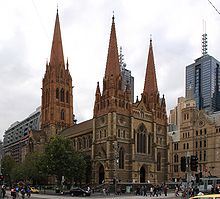 The provinces and dioceses are listed with each diocese's bishop or archbishop: