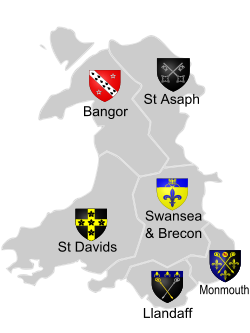 Map of the Dioceses in the Church in Wales

The Church in Wales (Welsh: Yr Eglwys yng Nghymru) is the Anglican church in Wales, composed of six dioceses.

As with the primus of the Scottish Episcopal Church, the Archbishop of Wales serves concurrently as one of the six diocesan bishops. The current archbishop is Barry Morgan, the Bishop of Llandaff.

In contrast to the Church of England, the Church in Wales is no longer an established church. Disestablishment was effected in 1920, under the Welsh Church Act 1914.

Christianity in Wales can be traced back to the Romano-British period. Wales became a refuge for other Britons following the pagan Anglo-Saxon invasion of what became England, so much so that the Welsh refused to co-operate with Augustine of Canterbury's mission to the Anglo-Saxons. However, a combination of other Celtic dioceses reconciling with the See of Rome and the English conquest of Wales meant that from the Middle Ages until 1920, the Welsh dioceses were part of the Province of Canterbury, and also in communion with the See of Rome until the Reformation, continuing afterwards as part of the Church of England. From the time of Henry VIII, Wales had been absorbed into England as a legal entity and the established church in Wales was the Church of England. 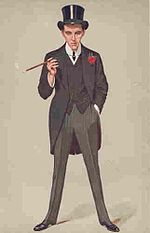 During the 19th century nonconformist churches grew rapidly in Wales, and eventually the majority of Welsh Christians were nonconformist, although the Church of England remained the largest single religious denomination. The Welsh Revival of 1904 made the gap between nonconformism and the high church practices of those who dominated the Church of Wales particularly conspicuous. A number of high-profile expulsions of evangelical clergy by bishops helped to create ill-feeling against the Church in Wales.[1]

Under the influence of nonconformist politicians such as David Lloyd George, the Welsh Church Act 1914 was passed by the Liberal Government to separate the Anglican Church in Wales from the Church of England. The bill was fiercely resisted by members of the Conservative Party, and blocked in the House of Lords, eventually being passed under the provisions of the Parliament Act 1911. The absence of any Welshman from Welsh bishoprics for 150 years had caused real resentment, and disestablishment was a way to assert national identity.[1]

The opposition to disestablishment was led by the Conservative politician F.E. Smith, who characterised the disestablishment bill as "a Bill which has shocked the conscience of every Christian community in Europe." In response to this description, the writer G. K. Chesterton penned the satirical poem, Antichrist, or the Reunion of Christendom: An Ode.[2]

The Act both disestablished and disendowed the "Church in Wales", the term used to define the part of the Church of England which was to be separated. Disestablishment meant the end of the Church's special legal status, and Welsh bishops were no longer entitled to sit in the House of Lords as Lords Spiritual. Establishment had had disadvantages as well as advantages: for example, priests of the Church of England were barred from sitting in the House of Commons, but this no longer applied to priests in Wales. As the Church in Wales became independent of the state, tithes were no longer available to the church, leaving it without a major source of income.

Disendowment, which was even more controversial, meant that the endowments of the Church in Wales were partially confiscated and redistributed to the University of Wales and local authorities. Endowments before 1662 were to be confiscated; those of later date were to remain. This was justified by the theory that the pre-1662 endowments had been granted to the national church of the whole population, and hence belonged to the people as a whole rather than to the Church in Wales; understandably, this reasoning was hotly contested. The date 1662 was that of the Act of Uniformity following the Restoration; it was after this point that nonconformist congregations truly began to develop and the Church of England ceased to be a comprehensive national church.

Due to the outbreak of World War I in the summer of 1914, the Welsh Church Act 1914 was passed together with the Suspensory Act 1914, meaning that the Welsh Church Act would not be implemented for the duration of the war. Disestablishment finally came into effect in 1920.

In the first years of the 21st century, the Church in Wales has begun to engage in numerous debates, particularly concerning the appointment of women to the episcopate and the recognition by the province as a whole of the equal statuses of the Welsh and English languages in all aspects of Church life.

Flag of the Church in Wales.

The polity of the Church in Wales is Episcopal church governance, which is the same as other Anglican churches.

Prior to 1920, there were four dioceses in Wales, all part of the Province of Canterbury, and each led by its own bishop:

Two further dioceses were erected soon after the creation of the Church in Wales:

In cases where a see is vacant due to the death, or transfer, of a bishop, episcopal acts such as ordinations and confirmations are carried out by the archbishop or a duly deputised bishop.

Following the retirement of Bishop David Thomas as Provincial Assistant Bishop in 2008, the Bench of Bishops has decided that it would not continue to appoint a specific bishop to minister to those who cannot in conscience accept the ministry of women.

The archbishopric had from time to time had an assistant bishop to assist in diocesan ministration. Archbishop Morgan has an assistant bishop who assists him in ministering to the Diocese of Llandaff. From April 2009, the incumbent was the Right Reverend David Wilbourne.[5]

The Representative Body is responsible for the care of the Church's property and for funding many of the activities of the Church, including support for priests' stipends and pensions. The Governing Body functions as a kind of parliament (similar to the Church of England General Synod) for the Church.

The Church in Wales as a whole tends to be predominantly High Church, that is to say that many of the traditions inherited from the Oxford Movement, in more rural dioceses such as St David's and Bangor and the industrial parishes of Llandaff and Monmouth. However, even though the province in terms of theology and liturgy is more liberal and Anglo-Catholic in leaning, there is a tradition of evangelicalism, especially in the southern parts of Wales, and the university town of Aberystwyth. In the 1960s there was a revival of evangelicalism within the Church in Wales and the Evangelical Fellowship of the Church in Wales exists to support such members of the Church.

The 1984 Book of Common Prayer, with supplemental materials added since 2002, is the current Book in use in the province of Wales. The publication of the 2004 Holy Eucharist and 2006 Rites of Christian Initiation are the largest reforms in liturgy in nearly forty years. It is hoped[by whom?] that by the end of the decade that the 2004 Eucharist rite will be the sole celebrated rite within the province, leading the Church to become more centered on the Eucharist. The Standing Liturgical Commission are preparing resources for Morning, Evening and Daily Prayer which will be published in Autumn 2009.

Discontinued publications which frequently provided articles of sub-academic quality were Province and Yr Haul â'r Gangell. Current news is provided now mainly in English in the weekly Y Llan and Highlights which appears in connection with meetings of the Governing Body.

Central to the teaching of the Church in Wales is the life, death and resurrection of Jesus Christ. The basic teachings of the church, or catechism, include:

The balance of Scripture, tradition and reason as authority for faith and practice is traced to the work of Richard Hooker, a sixteenth century apologist. In Hooker's model, Scripture is the primary means of arriving at doctrine and things stated plainly in Scripture are accepted as true. Issues that are ambiguous are determined by tradition, which is checked by reason.[6]

Beginning in the 1980s, the Church in Wales embarked on an increasingly open stand on various issues including economic justice, ordination of women, and inclusion of homosexual people. In some areas, such as human sexuality, the church establishment has faced resistance.