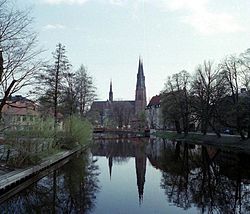 Uppsala, with its huge cathedral, remains the seat of the Church of Sweden.

The Church of Sweden (Swedish: Svenska kyrkan) is the largest Christian church in Sweden. The church professes the Lutheran faith and is a member of the Porvoo Communion. With 6,589,769 baptized members[1], it is the largest Lutheran church in the world, although combined, there are more Lutherans in the member churches of the Evangelical Church in Germany (24.5 million). Until 2000 it held the position of state church. Approximately 2% of the church's members regularly attend Sunday services.[2]

The Church of Sweden, by law,[3] is organized in the following manner:

The Primate of the Church of Sweden is the Archbishop of Uppsala, currently Anders Wejryd.

King Gustav I Vasa instigated the Church of Sweden in 1526 during his reign as King of Sweden. This act separated the church from the Roman Catholic Church and its canon law. In 1572, the Swedish Church Ordinance became the first Swedish church order following the Reformation.

The Church of Sweden became Lutheran at the Uppsala Synod in 1593 when it adopted the Augsburg Confession to which most Lutherans adhere. At this synod, it was decided that the church would retain the three original Christian creeds: the Apostles', the Athanasian, and the Nicene.

In 1686, the Parliament of Sweden adopted the Book of Concord, although only certain parts labeled Confessio fidei were considered binding, and the other texts merely explanatory. Confessio dei included the three aforementioned Creeds, the Augsburg Confession and two Uppsala Synod decisions from 1572 and 1593.

During the 19th and 20th centuries, a variety of teachings were officially approved, mostly directed towards ecumenism:

In practice, however, the Lutheran creed texts play a minor role, and instead the parishes rely on Lutheran tradition in coexistence with influences from other Christian denominations and diverse ecclesial movements such as Low Church, High Church, Pietism ("Old Church") and Laestadianism, who locally might be strongly established, but who have little nation-wide influence.

During the 20th century the Church of Sweden oriented itself strongly towards liberal Christianity and human rights. 1957 the church assembly rejected a proposal for ordination of women, but then the parliament changed the law in spring 1958 and forced the church assembly to accept the new law in autumn 1958. Since 1960, women have been ordained as priests, and since 1994, men who oppose collaboration with women priests have not been allowed ordination. A proposal to perform same-sex weddings was approved on October 22, 2009 by a majority of 176 of 249 voting members.[4] 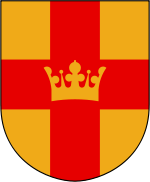 Coat of arms of the Church of Sweden.

While some Swedish areas had Christian minorities in the 9th century, Sweden was, because of its geographical location in northernmost Europe, not Christianized until around AD 1000, around the same time as the other Nordic countries, when the Swedish King Olof was baptized. However, Norse paganism and other pre-Christian religious systems survived in the territory of what is now Sweden later than that; for instance the important religious center known as the Temple at Uppsala at Gamla Uppsala was evidently still in use in the late 11th century, while there was little effort to introduce the Sami of Lapland to Christianity until considerably after that.

The Christian church in Scandinavia was originally governed by the archdiocese of Bremen. In 1104 an archbishop for all Scandinavia was installed in Lund. Uppsala was made Sweden's archdiocese in 1164, and remains so today. The papal diplomat William of Modena attended a church meeting in Skänninge in March 1248, where the ties to the Catholic Church were strengthened.

The most cherished national Catholic saints were the 12th-century King Eric the Saint and the 14th-century visionary Bridget, but other regional heroes also had a local cult following, including Saint Botvid and Saint Eskil in Södermanland, Saint Helena of Skövde[5] and Saint Sigfrid in Småland. In their names, miracles were performed and churches were named.

Shortly after seizing power in 1523, Gustav Vasa addressed the Pope in Rome with a request for the confirmation of Johannes Magnus as Archbishop of Sweden, in the place of Gustav Trolle who had been formally deposed and exiled by the Riksdag of the Estates.

Gustav promised to be an obedient son of the Church, if the pope would confirm the elections of his bishops. But the pope requested Trolle to be re-instated. King Gustav protested by promoting the Swedish reformers, the brothers Olaus and Laurentius Petri, and Laurentius Andreae. The king supported the printing of reformation texts, with the Petri brothers as the major instructors on the texts. In 1526 all Catholic printing-presses were suppressed, and two-thirds of the Church's tithes were appropriated for the payment of the national debt. As Gustav Vasa triumphs 3 was formulated, a final breach was made with the traditions of the old religion.[6]

Other changes of the reformation included the abolition of some Catholic rituals. However, the changes were not as drastic as in Germany; in many Swedish churches there still today remain artifacts from Catholic times, such as crosses, crucifixes and icons. And many holy days, based on saints days, were not removed from the calendar until the late 18th century due to strong resistance from the population.

After the death of Gustav Vasa, Sweden was ruled by a king with Catholicizing tendencies, John III, and another openly Catholic one, John's son Sigismund, who was also ruler of Catholic Poland but eventually deposed from the Swedish throne by his uncle. The latter, who acceded to the throne as Charles IX used the Lutheran church as an instrument in his power struggle against his nephew, but is known to have had Calvinist leanings.

The New Testament was translated to Swedish in 1526 and the entire Bible in 1541. Revised translations were published in 1618 and 1703. New official translations were adopted in 1917 and 2000. Many hymns were written by Swedish church reformers and several by Martin Luther were translated. A semi-official hymnal appeared in the 1640s. Official hymnals of the Church of Sweden (Swedish: Den svenska psalmboken) were adopted in 1695, 1819, 1937 and 1986. The latter one is ecumenical and combines traditional hymns with songs from other Christian denominations, including Seventh-day Adventist, Baptist, Catholic, Mission Covenant, Methodist, Pentecostalist, and the Salvation Army.

The 19th century back to one found in Uppsala Cathedral. It is blazoned Or, on a cross Gules an open crown of the field and thus features a yellow field with a red cross on which there is an open red crown. The crown is called the victory crown of Christ, based on the medieval tradition.

The Church adopted, at the time that it was still a state church, an administrative structure largely modelled after the state. Direct elections are held to the General Synod (Swedish: Kyrkomötet, The Church Assembly), and the diocesan and parish (Swedish: Församling) assemblies (and in some cases, confederation of parishes (Swedish: kyrklig samfällighet, 'church association') assemblies and directly elected parish councils). The electoral system is the same as used in the Swedish parliamentary or municipal elections (see Elections in Sweden). To vote in the Church general elections, one must be member of the Church of Sweden, at minimum 16 years of age, and nationally registered as living in Sweden.

The groups that take part in the elections are called nominating groups (Swedish: nomineringsgrupper). In some cases the nationwide political parties take part in the elections, such as the Social Democrats, the Moderates and the Centre Party. After the formal separation of Church of Sweden from the State of Sweden, the growing tendency in the elections is towards independent parties forming for candidature, either based on a political conviction, for example Folkpartister i Svenska kyrkan founded by Liberal People's Party members, or a pure church party such as the political independents' Partipolitiskt obundna i Svenska kyrkan (POSK) and Frimodig kyrka.

Dioceses, with seats, cathedrals and bishops

The dioceses of Uppsala, Strängnäs, Västerås, Skara, Linköping, Växjö and the now Finnish diocese of Turku, are the original seven Swedish dioceses, dating from the Middle Ages. The rest have come into existence after that time and the Swedish reformation in the 16th century.